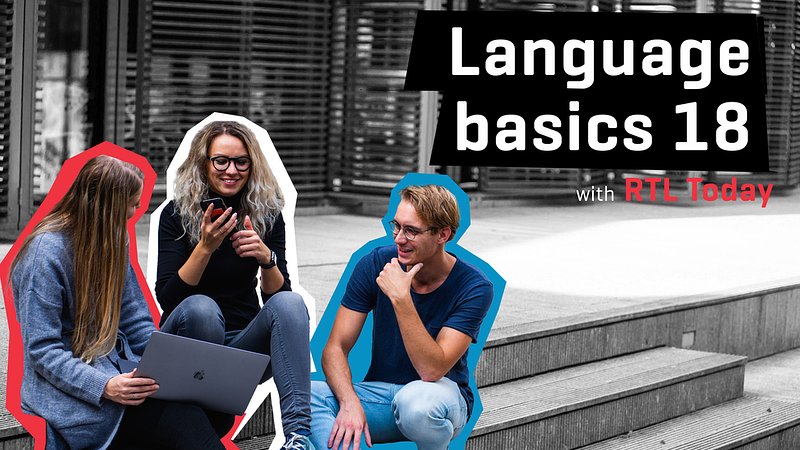 Grammar is a truly vast playing field. While you could easily write three articles about some topics, there are others that you can sum up quickly.

In this lesson, we've combined some of these "minor" grammar points for you.

Over the last 17 lessons, we've covered several "big" grammar topics, such as tenses, numbers, formal speech, cases, pronouns…etc. And while these topics are all complex enough to justify their own, individual lessons, there are other aspects of grammar that are a lot more straightforward. Even though they are still important and useful, there's just not enough to talk about to write a whole lesson just about this one topic.

For this reason, we decided that we should dedicate one of these grammar lessons to three topics that fall a bit short in terms of complexity but are still highly useful for anyone learning Luxembourgish. We hope you enjoy our selection!

The diminutive – Make it cute!

In Luxembourgish, we can form a diminutive by adding the suffices -i and -chen / -elchen:

-i is almost exclusively used to form terms of endearments. Another example would be Stupp, which is already a pet name for one's partner but can be made even cuter by adding the -i: Stuppi.

Quite often, you will also notice a vowel change:

Some words already have a diminutive ending in their standard form:

The genitive – The lost case

Remember a few lessons ago, when we told you that there are three grammatical cases in Luxembourgish? We feel that you are now ready to learn the truth: There are actually four – but the fourth case has almost completely disappeared from the language.

Some remnants of the genitive case remain and that's why it's at least worth mentioning this. Among them are two relatively common expressions that you will encounter:

Enn des Mounts-> "At the end of the month"

Since we're on the topic of grammatical cases again, there's another word that we should point out to you:

As you can see, der Däiwel has a bit of a peculiar definite article. Basically, this word is what's left of a time when the nominative and the accusative case were still distinct from each other in Luxembourgish. Because it is so unusual, even native speakers of Luxembourgish (especially younger ones) can find this word a bit weird. It is used in a number of very common expressions though (the following examples are all from LOD.lu):

-> this guy is mischievous (lit. "this guy has the devil in the belly")

-> things are not as bad as you may make them out to be (lit. "the devil is not as black as he is painted")

The weird thing Luxembourgers do with their names

Since you've just learned about the genitive, you are now also able to understand a very peculiar thing that Luxembourgers do with their names. Let's come up with three fictional Luxembourgers to show you what we mean: Viviane Hellers, Marcel Weber, and Stéphanie Thewes. Alright and now let's take a look at some examples to illustrate how native speakers might use those names:

As you can see, the last and first names have switched places. But there's even more going on. Three suffixes have been added to the last names: -s, -se(n), and -sch(en). This is in fact another archaic form of the genitive that has survived to this day. So, what's basically happening here is that the last name is turned into a possessive. While this concept does not exist in English, we can imagine what it would look like if it did: Instead of saying "John Smith called me" you could say "Smith's John called me" (as in: John of the Smith family called me).

This is one of those aspects that can instantly take your Luxembourgish to the next level, if you get the hang of it. Try it out with your own name (you don't have to have a "Luxembourgish" name for this to work) and have some fun with it!

Before you leave, don't forget to have a look at our extensive vocabulary list for the core lesson:

the turtle / the tortoise (Luxembourgish does not differentiate between the two)

d'Schnuddelhong (lit. "the snotchicken" – probably one of the best Lux words of all time)