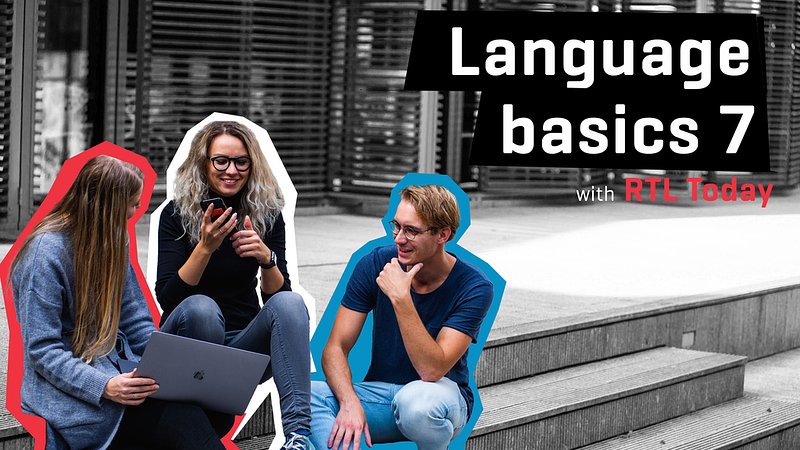 In most western languages, it's impossible to build a sentence without them: verbs.

In this lesson, we'll have a look at the pattern followed by regular verbs as well as the elements to keep in mind with irregular verbs.

Hello there and welcome back to Language Basics! Since you've stuck with us for six lessons already, we assume that you're at least somewhat interested in the grammatical bits and pieces that make a language work.

Remember that grammar is not something you need to learn by heart – think of it more like a blueprint that you can come back to as often as you like and that gives you a bit of insight into why a language looks and sounds the way it does.

The subject of this lesson is verbs. You've seen and heard them before in our main lessons, and maybe you've remembered some as part of the phrases we mentioned there. But how do they actually work?

The most basic form of a verb is the infinitive. In English, the particle "to" is used to express the infinitive: to read, to sing, to laugh… In Luxembourgish, the infinitive consists of a first part called the stem or the root, and the suffix -en: liesen, sangen, laachen…

Verbs can be regular or irregular. If a verb is regular, its stem never changes. By adding the corresponding suffixes, it is relatively easy to conjugate these verbs in the present tense (Präsens). Let's have a look at the regular verb laachen (to laugh) in the present tense:

As we can see, the verb stem laach- never changes. Another regular verb is kachen (to cook). Let's also have a look at kachen in the present tense – only this time, we'll pay particular attention to the suffixes:

If we know that a verb is regular, we can thus easily conjugate it in the present tense but simply adding the corresponding suffixes.

While the verb stem never changes for regular verbs, an irregular verb is characerised by a so-called umlaut in the second and third person singular. It's probably easiest to just show you an example, so let's have a look at the irregular verb kommen (to come):

As you can see, the original verb stem komm- transforms into kënn- in the second and third person singular – this is what is called an umlaut, or a vowel mutation.

However, that is not all. There is something else that can happen with irregular verbs that we should point out. Fortunately, if your goal is just to speak the language, this won't really be something you'll have to worry about. But just for completion's sake, let's have a look at the irregular verb kafen (to buy):

What stands out here is that while the verb stem retains its original vowel in the second person plural, it is doubled. The reason for this is Luxembourgish orthography: A long vowel does not need to be doubled as long as it is followed by no more than one consonant (like in kafen). However, if there are two consonants or more after a long vowel, the vowel in question has to be doubled (like in kaaft).

But there you have it: a (very) basic run-down of how verbs function in the present tense in Luxembourgish. As far as irregular verbs are concerned, there are some more element that we didn't touch on in this lesson. Most of them mainly concern orthography, however, and since the main focus of these lessons is on speaking Luxembourgish, we thought we'd spare you the trouble.

As always, before we're done for the day, we'll leave you with a vocabulary list for the main lesson.

Before we leave you, here is the full vocabulary list for the main lesson:

Pro Tip: If you want to specify how you want your meat cooked (or if the waiter asks you), restaurants in Luxembourg usually refer to the French terms: bleu (raw), saignant (rare), à point (medium), and bien cuit (well done).

As always for vocabulary lists, you can look up terms we have not included here on lod.lu