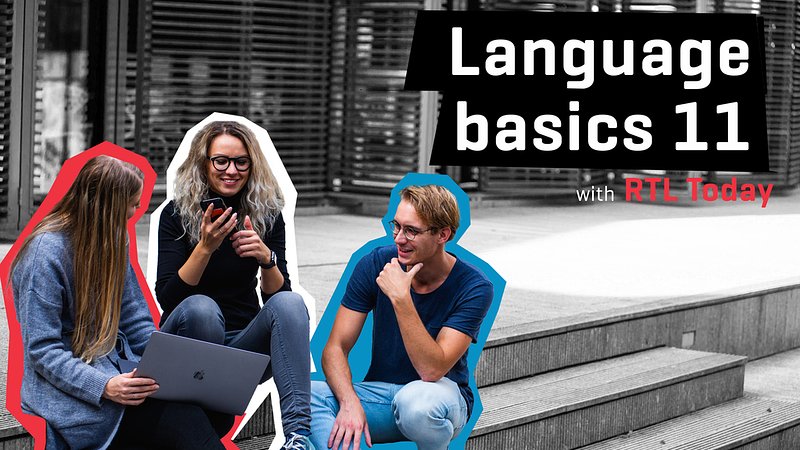 Expressing the future in Luxembourgish is so easy that it might throw you off at first. Not to worry though, we're here to clear things up!

Hello and welcome back to Language Basics where today… okay, listen, today's lesson is going to be a bit weird. The reason for this is that we're supposed to cover the "future tense" today, but the problem is: It doesn't really exist.

Luxembourgish does not really have a proper future tense per se. In a way, this is good news, as this means there's one fewer tense for you to worry about! However, it also makes things a bit complicated at first, especially if your native language does have a future tense.

So, how do we express the future in Luxembourgish?

Option 1: Just make it clear you're talking about the future

The most common way to express the future in Luxembourgish is to simply use the verb in the present tense and make it clear through context clues that you're talking about an event in the future. As always, it is probably best to just look at some examples:

Note that if you take away the context clue, the meaning of the sentence changes in Luxembourgish (but not in English):

Ech lafen ee Marathon -> this event is now taking place in the present, it even has a sort of "present continuous" meaning ("I'm running a marathon", as in right now in this moment)

In contrast: I'm going to run a marathon -> this event still takes place in the future and the use of the "be going to" future even implies a sense of certainty.

By adding a single word, you can sometimes change the meaning of a Luxembourgish sentence significantly:

Option 2: Use the auxiliary verb wäert to convey a specific meaning

There is another way to express the future in Luxembourgish by using the auxiliary verb wäert:

However, you should know that this "future" carries certain connotations with it. To illustrate what we mean by this, let's look at the two different ways we can express the above sentence:

b) Hie wäert muer bestuet ginn -> He will get married tomorrow

a) expresses a fact that is all but certain to come true. On the other hand, b) expresses a circumstance that is likely to come true because of certain pieces of information. In the case of a), you might be a guest at the wedding in question and you know for a fact that the wedding is going to take place tomorrow. On the other hand, the speaker in the b) scenario might not be directly involved in the wedding and is just passing on information they have picked up elsewhere.

Sometimes, the structure used in b) can also be used to express scepticism regarding the event.

If this second option is too confusing for you, don't worry about it. Just stick with the present tense and use context clues to make it clear that you're talking about the future. Once you get used to it, this way of expressing the future will feel very natural!