The southwest of Luxembourg was heavily hit by a tornado late on Friday afternoon.

Given the fact that Saturday's forecast predicts high winds, residents have been asked not to remain near areas that experienced a lot of damage in the tornado. The wind could cause further destruction.

The head of CGDIS, Paul Schroeder, told RTL that residents must respect road closures in order to not be in danger.

The authorities have scheduled a press release for 9.30 am on Saturday morning, where Minister of Labour Dan Kersch will be standing in for Minister of Home Affairs Taina Bofferding. Schroeder will also be at the press conference in Bascharage, and together they will provide information about the situation and present the next actions.

A breathtaking pic of the tornado in #Luxembourg. pic.twitter.com/m5rEOJyJGc

Supermarket chain Cactus announced that their Bascharage supermarket would remain closed all day Saturday due to the damage from Friday's weather. Other Cactus supermarkets will remain open.

Those affected by Friday's tornado should contact the dedicated hotline at 8002 8080. The government has also launched a crisis unit made up of eleven involved actors, including the Grand Ducal Fire and Rescue Corps, the army, and the police.

French rescue services were called in as reinforcements, whilst the situation will be evaluated regularly with updates for the public.

The government press release initially confirmed that seven people were injured, all of whom were located at a large supermarket in Bascharage. According to RTL sources, one person is critically hurt. After 11pm, the government confirmed that number had risen to 14, two of whom had more critical injuries.

The emergency services received more than 1,000 calls between 5.30pm and 9pm.

Those living in Bascharage and unable to return to their homes should go to the "Käerjenger Treff" cultural centre to receive aid from local authorities. Those in Petange should go to the Beim Diederich sports hall.

Prime Minister Xavier Bettel detailed on social media that the government would be providing the affected people with support.

The orange alert predicted stormy weather between 5pm and 9pm. While Meteolux originally issued a yellow weather alert, this has now been promoted to an orange alert. At 7.30pm, Meteolux confirmed that the orange alert has ended.

The Grand Ducal Fire and Rescue Corps published its first press release shortly before 8pm, confirming that the tornado hit the municipalities of Bascharage, Petange, and the surrounding areas at 5.30pm. The provisional tally of injuries lays at six people, all of whom are being attended to at the Bascharage Cactus.

In addition to roads blocked by trees and damaged buildings, some roads have also lost power.

At 7pm, the police provided an update confirming that there has been a significant amount of damage to buildings, with roofs having been destroyed, trees having been uprooted, and traffic signs and other objects lying on the streets.

The emergency services also remind residents not to overwhelm the emergency phone line and only to call in case of an emergency.

Given the road conditions, the police advice avoiding the use of cars in the southern part of the country. Both police officers and emergency services personnel have been deployed to help with traffic and request patience for the length of time that emergency operations will require. Globally, the police have reported many traffic issues in the affected region, namely around Petange and Bascharage.

There have also been some reports of light injuries in addition to building damage.

A Facebook post shows a road in Petange, where the roofs of several homes have been destroyed. The damage in Petange appears to be quite severe. 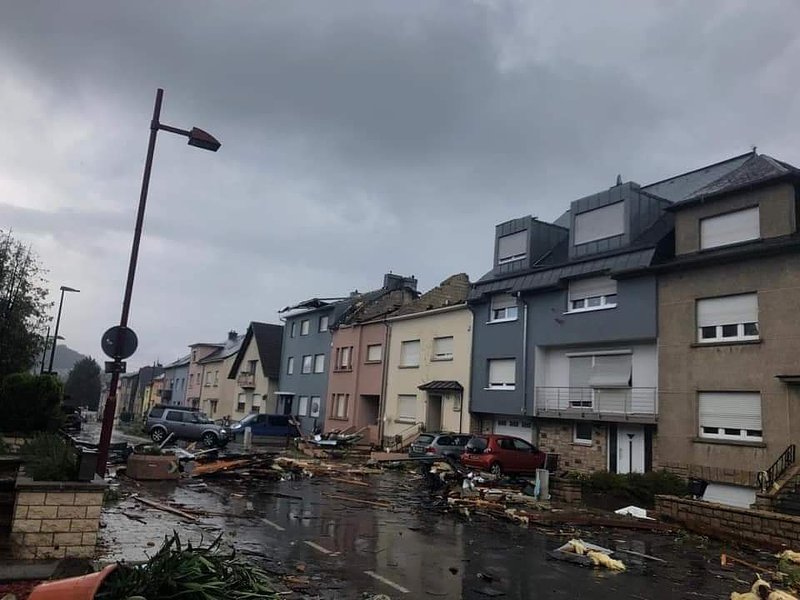 More damage seen in a street in Petange. / © Maryse Lanners

According to Kachelmann-weather, there were wind gusts of up to 128 km/h. The south is not the only part of the country to be affected, as there has been a significant amount of rainfall in Clervaux, where drain covers have popped out of place due to the masses of rainfall. Some streets are completely flooded.

In Mondorf-les-Bains / © lm
Clouds coming in over Kahler. / © Sandy Schmit
Heavy storms came in over Petange alongside air turbulence. / © David Winter
The photos published on this site are subject to copyright and may not be copied, modified, or sold without the prior permission of the owner of the site in question.

Kachelmannwetter.com reports: Afternoon temperatures are to climb from 23 to 29°, with heavy showers, thunderstorms in some areas and torrential rain, hail and wind-storms in others.

Meteo France also announced an amber alert for the north of France, applying to 26 regions, such as Lorraine. Potentially heavy thunderstorms are predicted.