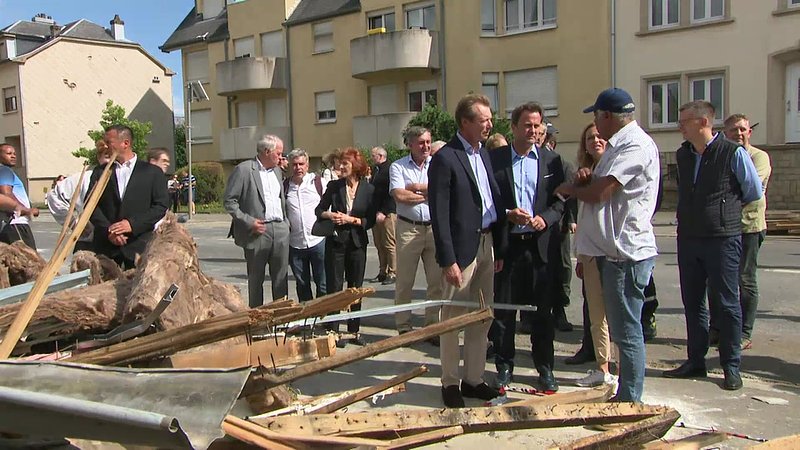 Prime Minister Xavier Bettel was overwhelmed by Luxembourg's solidarity for those affected by the tornado on Friday, but expressed shock for the desctructive effect the storm had in the municipalities.

On Saturday morning at 9:30am a press conference was organised with Minister of Labour Dan Kersch and CGDIS director Paul Schroeder.

The governing council came together at 8:00pm on Saturday for an emergency sitting. On the agenda was what action to take to best help those in need.

Prime Minister Xavier Bettel is shocked in the face of the damage caused by the tornado. He states that the governing council will decide how to proceed in order to help affected people as swiftly as possible. Even after such a catastrophe he is proud to be both Prime Minister and a Luxembourger, and praises the emergency services and volunteers who have shown a great deal of solidarity.

On Friday evening, 19 people were injured, 2 of which had to be hospitalised. One person remains in critical condition after having a heart attack.

Approximately 80 - 100 houses remain uninhabitable in both municipalities. 60 people had to be rehoused, if their houses are declared uninhabitable, the municipalities have to find a solution for these people. On Friday evening, 200 firemen and 40 police officers were in action.

Major problems have been reported around the Biff roundabout, where many houses are uninhabitable. 40 people had to be rehoused, most of which are now staying in hotels, at least until the 19th. Some people are staying with their family.

Moreover, high-voltage lines have been damaged, leading to further problems. 4 poles have snapped causing the power lines to hang down. As this is extremely dangerous, shops in the region will remain closed for the moment. The Biff roundabout as well as the road between Linger and Käerjeng will also remain closed. A company (Sotel) is currently securing the site.

Clearance work will take some time, with roads being a priority followed by everything else. The army has been mobilised to help the clean-up, and they are expected to stay in the region for several days to support the local services and people.

A helpline has been put into place where people can report problems linked to the tornado. Citizens are also invited to call if they know that their neighbours are on holiday and their houses have been damaged. The helpline can be reached on 621 455 717, or via e-mail: helpline@kaerjeng.lu.