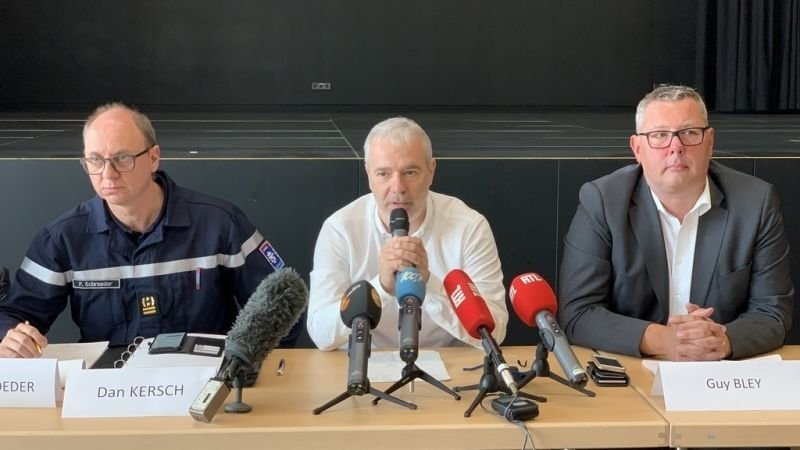 Minister of Labour, Employment and the Social and Solidarity Economy Dan Kersch (standing in for Minister for Home Affairs Taina Bofferding) and CGDIS director Paul Schroeder held a press conference in Bascharage at 9.30 am on Saturday.

One of the first details supplied at the press conference is that the government will organise an information meeting for the residents of Bascharage and Petange. The meeting will take place in Petange and those affected in Bascharage will be taken to the meeting via bus. 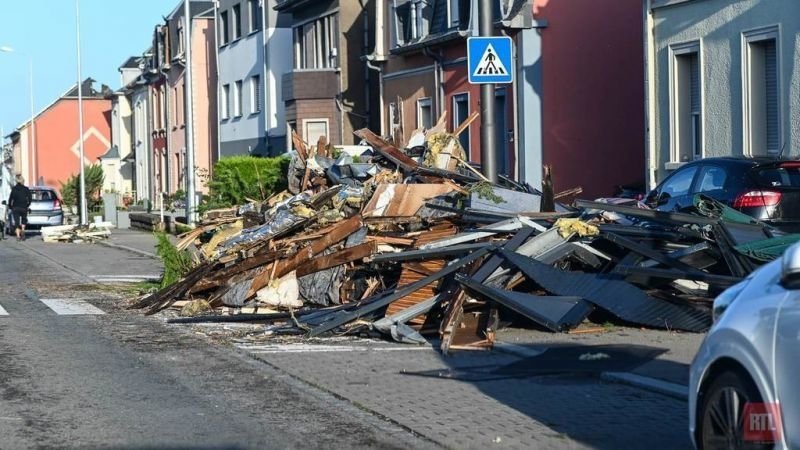 Kersch then took a moment to praise all those who stepped in to help and the exemplary operation run by the emergency services and the police. The minister then specified that Minister for Home Affairs Taina Bofferding and Prime Minister Xavier Bettel have both cut their holidays short and are on their way back to Luxembourg. This evening, the government  council will meet to discuss further measures and aid in the wake of the tornado.

In total, 19 people were injured on Friday, two of whom were taken to hospital. One person remains in a critical state after having had a heart attack.

Around 80 to 100 homes in each municipality are not in a liveable condition. Around 200 firefighters and 40 police officers were deployed on Friday night. So far, 60 people have been rehomed, 20 from Petange and 40 from Bascharage. The storm began in Rodange and spread through Lamadelaine to Petange. Residents in the area were put up in hotels, and the Bim Diederich sports hall (intended as a shelter) was not required.

The minister and CGDIS director also both detailed that the region is currently experiencing issues with power lines, as four pylons were knocked over in the storm. The danger resides in the fact that power lines are dangling and consequently, all shops in the area have been closed. The firm Sotel is in the process of securing the power lines. The Biff roundabout will also be closed for the time being due to the situation being too dangerous.

40 of those rehomed are residents living near the Biff roundabout, as the homes are no longer inhabitable. The majority of these residents have been put up in hotels. Around 25 are expected to have to remain in hotels until 19 August, whereas 15 others will be able to stay with family members. Fränk Pirrotte, representing the Bascharage municipality, detailed that other municipalities have offered their help and support.

The route connecting Linger and Bascharage is also closed.

The clean-up operation of the streets will also take some time, the authorities detailed. They will prioritise cleaning important thoroughfares and larger streets first. The army has been mobilised to help both municipalities, with 20 soldiers currently deployed. More soldiers will join as the day goes on. The government plan is for the soldiers to help out in the towns over the next few days to provide support to local residents and the authorities.

Municipal employees and firefighters continue to work hard on Saturday morning, with around 50 people working for the Petange municipality currently helping out. Pierre Melina, the mayor of Petange, praised neighbours who showed an exemplary community spirit, helping the affected, and thanked them for their kindness.

Grand Duke Henri has also announced that he will be visiting the area to survey the situation. The Grand Duke is expected at 3.30 pm.

Many people were asking why the government issued app "GouvAlert" - meant to inform the public of any events or crises that would affect public safety - was not used. Minister Dan Kersch explained that unexpected and abrupt nature of the tornado had prevented any possibility of warning people in advance. No one could have foreseen the damage that would result from the adverse weather conditions.

The app was, however, now available and providing updates of the situation.