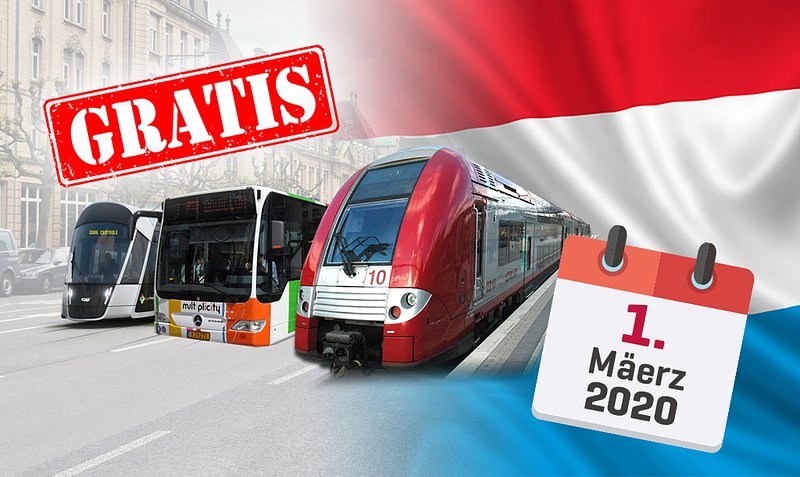 Luxembourg will experience a historic shift by the end of this week, as free public transport will come into effect on Sunday 1 March. This week, we'll be examining the individual aspects of the decision and legislation ahead of the day itself.

It is certainly true that the 2018 government's decision to move towards free public transport will enter the history books. The government's announcement brought Luxembourg acclaim and analysis on a global scale, as news outlets from further afield - rather than just our neighbouring countries - reported on the decision.

Amongst those with a prominent platform praising the move was, notably, US presidential hopeful Bernie Sanders.

Whilst the main focus is the change for the Grand Duchy's society, Luxembourg's Prime Minister Xavier Bettel admitted the international effect of the decision: "We believe this belongs to the concept of nation branding. This means people will know that when they visit Luxembourg, they don't need to worry about fares and can simply get on the bus or train and travel somewhere else."

The move shifted Luxembourg's representation in the foreign media from the proud tax haven to a generous country taking steps to improve its complex traffic issues, exacerbated by its cross-border traffic. However, the journey to 1 March has been a long one, as long as the topic of traffic issues has been on the public agenda.

The aim of the move was to encourage people to leave their cars at home and resort to buses or trains. There have been similar initiatives in the following years.

Five parties, namely the Democratic Party, the Luxembourg Socialist Workers' Party, the Communist Party of Luxembourg, the Pirate Party, and the Left, all clearly and instantly advocated for free public transport. Alternative Democratic Reform Party MP Gast Gibéryen also outlined his interest in the idea, arguing it could incentivise people.

The Green Party, on the other hand, was initially cautious. François Bausch, now Minister for Mobility and Public Works, explained his apprehension: "We in Luxembourg have the cheapest public transport in the entire European Union. It costs €100 a year for those over 60 to travel around the country, at an unlimited rate. The issue is not with the cost of public transport."

Instead, Bausch highlighted the importance of improving punctuality, the quality of public transport, and, crucially, the availability. As for Bausch's shift towards supporting the idea, Bettel said this required new calculations rather than work spent convincing the minister. Three months later, Bausch said: "Free public transport is the cherry on top of a cake representing a complete mobility strategy, but the cake itself must be baked. Naturally, the cake is investing in infrastructure."

The City of Luxembourg authorities were also sceptical to start with, as the move would mean the state treasury would be missing €24 million as of 1 March.

Officials also grumbled that they had not been invited to the official presentation of free public transport. This minor clash was quickly resolved, as the move will be inaugurated by a free concert on 29 February, held in the capital, of course.