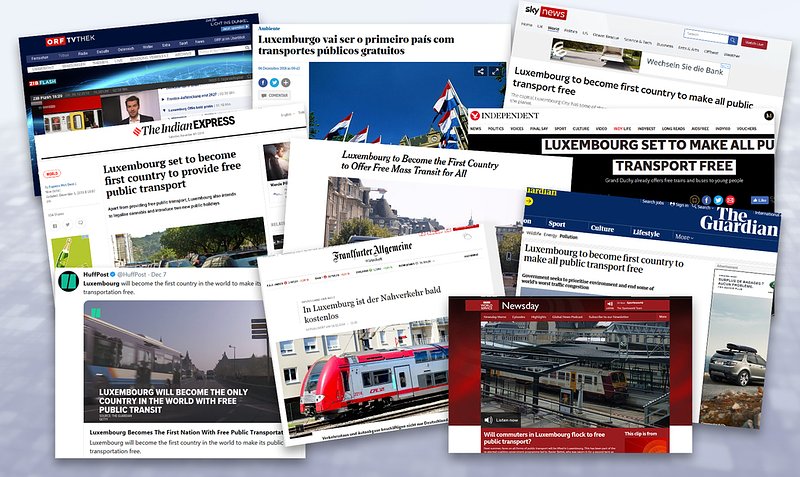 The US, Great Britain, India, Portugal, Austria,... The announcement that Luxembourg will be the first country to introduce free public transport made headlines across the globe.

After the coalition agreement was made public this week, Luxembourg made it into the headlines of several big international publications.

ORF: In Luxemburg ist der Nahverkehr bald kostenlos
New York Times: Luxembourg to Become the First Country to Offer Free Mass Transit for All
JN: Luxemburgo vai ser o primeiro país com transportes públicos gratuitos
Indian Express: Luxembourg set to become first country to provide free public transport
Sky News
Independent
Huffington Post
The photos published on this site are subject to copyright and may not be copied, modified, or sold without the prior permission of the owner of the site in question.

Apart from the legalisation of recreational cannabis, Luxembourg announced that public transport will become free within the next couple of years.

Portugal's "Jornal de Notícias" reported on Luxembourg's bid to make public transport free for everyone.
In the US, the announcement made headlines in the "New York Times" and the "Huffington Post". Even Vermont Senator and 2016 Democratic presidential candidate Bernie Sanders weighed in on the subject in a Facebook post:

The news spread across the globe, with India's "Indian Express", Austria's "ORF" and the German "Frankfurter Allgemeine Zeitung" picking the subject up.

In Great Britain, "The Guardian", the "BBC", "Sky News" and "Independent" published articles with their take on the story.