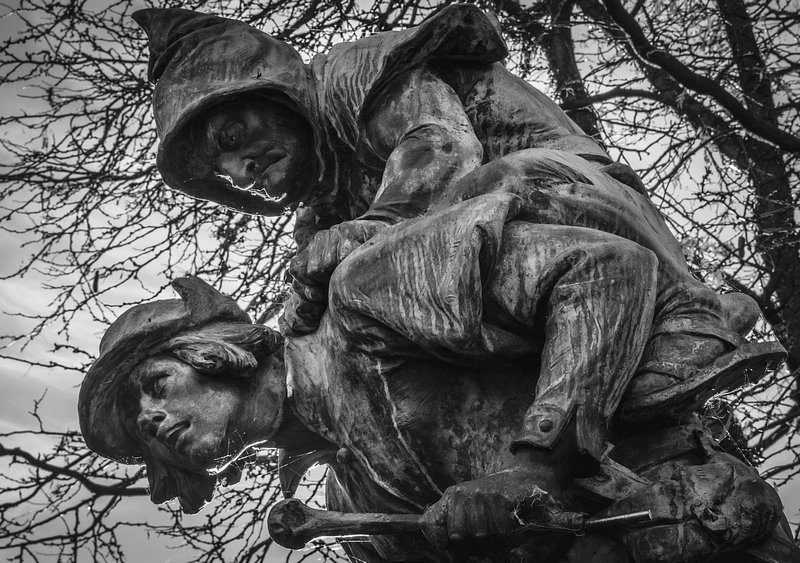 In his series on myths and legends, Gerry Erang explores some of the Grand Duchy’s lesser-known yet enthralling stories. This week's legend serves as a reminder that myths are often symbolic representations of psychological struggles as old as humanity itself.

Ever had the blues and felt like an immense burden weighed paralysingly heavy on your shoulder? If you're unfamiliar with that feeling, lucky you! For the rest of mere mortals, it's a sensation all too painfully familiar. Anyway, it doesn't really matter whether you're an unshakeable optimist or always think the glass is half empty - Germany's Aufhocker (or huckup) is an unpleasant little fellow we think you should have the misfortune of getting to know a little bit better.

But, as an eminent university professor once more or probably less eloquently said, let's cut this lengthy circumlocution short and get to the story. The so-called Aufhocker is a mythological shapeshifter that, at least in German folklore, is usually pictured as a as a goblin-like creature you don't really want to come across on a lonely night. Legend has it that the little creature jumps on the backs of unsuspecting travellers, slowly weighing them down. The stubborn fellow can neither be shaken off nor killed; it will generally remain on the back of its victim until the latter passes away from utter exhaustion. 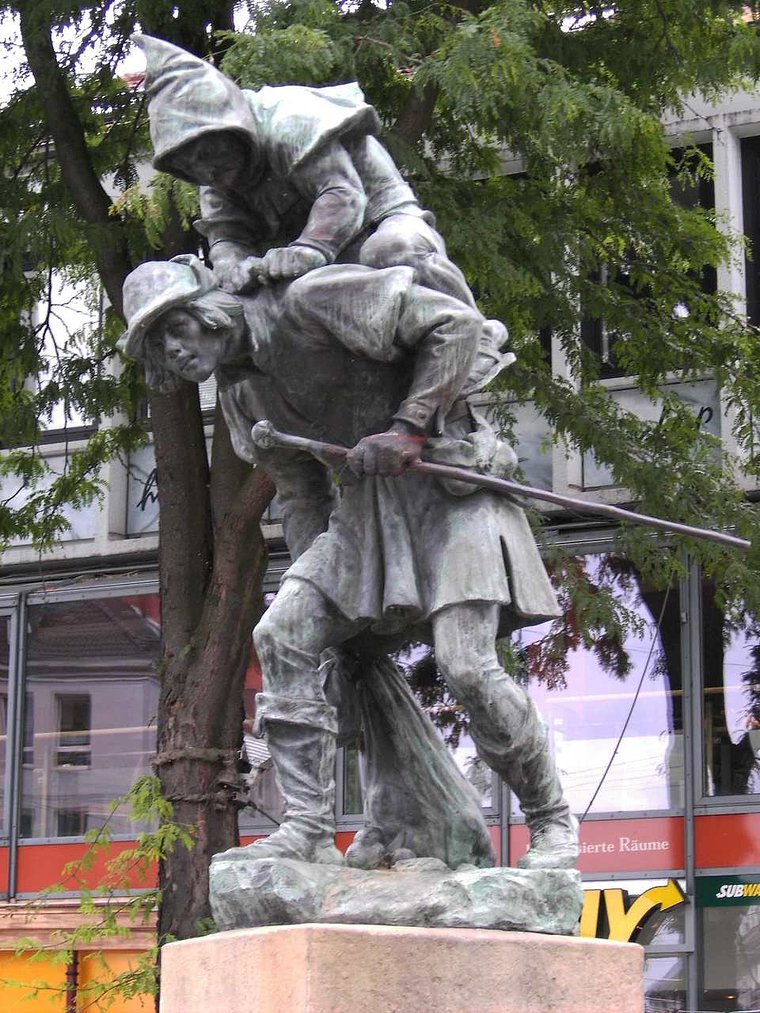 There are different versions of the same legend. According to some accounts, the Aufhocker mainly targets thieves or other criminals. In another well-known variant of the myth, the mischievous goblin jumps on the back of an elderly woman, getting heavier with every step the poor soul takes. Straightforward story or multilayered symbolic tale? Feel feel to disagree but I would argue the latter description holds true. The Aufhocker can easily be interpreted as a symbolic representation of psychological woes most people are at least a tad familiar with. In the case of the thieves, the puzzling creature can be read as the personification of guilt and bad conscience nagging at the culprits' subconscious. Even though it usually cannot be seen, it is always there, dragging down the wrongdoers and serving as a constant reminder of the dark deed.

In short, it's a metaphorical representation of an emotional burden weighing heavy on your shoulders - no matter how hard you try to shake off unpleasant memories. The fact that the Aufhocker is a shapeshifter is also revealing - fears and unsettling emotions can take various forms and have different origins. In the case of the elderly woman, the most likely explanation is that it represents time itself and, by extension, the fear of getting older. As you're aging, it becomes harder to move in a literal way - and even harder if you're terrified by the realisation that you're getting older. 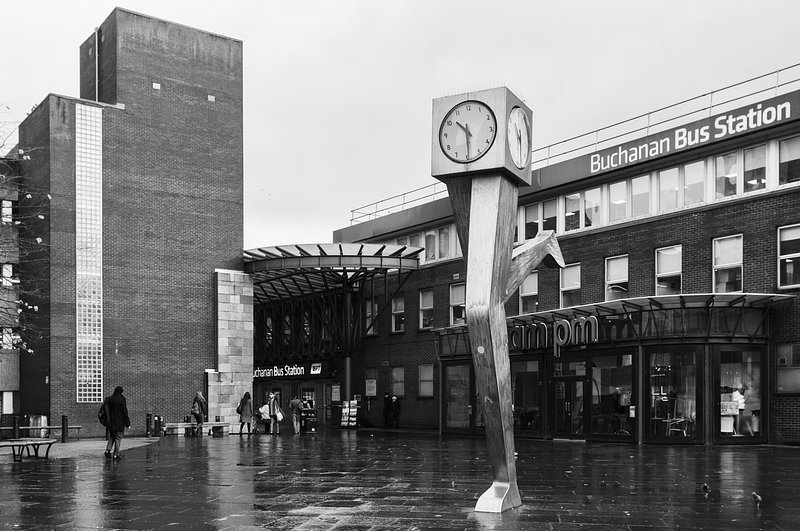 Think Jungian shadow, that dark aspects of an individual's personality that are usually repressed and never really brought to light because a confrontation would be too painful. Trauma, low self-esteem, anxieties - all the psychological afflictions that have plagued humanity since it saw the light of day. The Aufhocker, at the end of the day, is a sinister part of our self.

The mysterious wrestle in Bersdorf - Luxembourg's answer to the Aufhocker myth?

Once upon a time, a tired Luxembourgish border guard returned home to Berdorf in the scenic Mullertal region the after a long day at work. The sun was setting, and the black-haired fellow slowed down a bit to pause for a moment and take in the views. His tiredness, however, immediately evaporated when his disbelieving eyes unexpectedly beheld a breathtakingly beautiful young woman. The woman remained immobile, standing under a lush tree. Revived by sudden cravings of a more... well, let's say physical nature, our border guard resolutely marched towards the mesmerizing apparition, firmly decided on kissing her.

From there, things took an unpleasant turn for him rather quickly. As he was approaching the young woman, someone -or rather something- violently pulled him back from behind. Dumbstruck, the guard clumsily tried to fight back, engaging in a veritable wrestle with the magical force. The problem? At no time did he actually see his mysterious attacker. He struggled, he screamed, he tried to punch the invisible culprit - but it was all in vain. The grotesque wrestling match went on for a little while and then stopped as abruptly as it had begun. The beautiful young woman, to his disappointment, had vanished. Injured and badly scratched, he resignedly embarked on his journey back home.

The next morning, he woke up and looked into the mirror. Stupefied with horror, he saw that his black hair had turned white as snow.

When myths say one thing but mean another

The are striking parallels between Germany's tale of the Aufhocker and Luxembourg's very own myth about the mysterious wrestling match in Berdorf. The story not only reads but also operates a bit like a Freudian dream. To simplify a key component of Freud’s theory, a dream has a manifest and a latent content. The manifest content is the literal visual content of the dream, the images the dreamers sees as he peacefully slumbers. The latent content, on the other hand, is less straightforward – but significantly more interesting. Freud believed that the seemingly innocuous manifest content is only the tip of the iceberg, hiding the psychological meaning of the dream. In other words, the literal content contains ideas that you subconsciously repress to protect yourself, namely traumatic or upsetting things. Your subconscious acts like a censorship machine, displacing content and turning things you try not to think about in your daily life into less threating metaphors.

Let’s say you dream of missing your bus. You see it in front of you and attempt to run after it but can’t seem to catch it. The manifest content of the dream would be just that: the image of the bus, you running after it. The latent content, Freud would argue, is the metaphorical dimension behind the dream: the inability to catch your bus could signify a repressed fear of not being able to move forward in your life, of remaining stuck and immobile in the same place and leading an unfulfilling life. In short: the unpleasant stuff you might force from your mind in your daily life.

I would argue that allegorically coloured myths like the story of the Berdorf wrestle derive their true potency and meaning from the same underlying mechanisms. The manifest content of the legend, to borrow Freud’s term, is the straightforward plot of the story I elaborated above. To come to the latent content, there are several textual hints that the protagonist is afraid of aging and, by extension, of emasculation. The leitmotif of transitions and in-between states is revealing in this context: the protagonist is a border guard (a border being a place between two distinct geographical locations) and the story takes place as the sun is setting (a temporal border state between day and night). The man, I would argue, is similarly caught in a state of transition between two phases in his life, subconsciously fearing the onset of old age. His attempt to kiss a young woman could be read as his desperate attempt to prove to himself that his masculinity is still intact, and that he’s not too old to make such a move. The fight with the mysterious force that pulls him back and leaves him so bruised is to a certain extent a confrontation with his own subconscious and the repressed fears of becoming old. The story concludes with the realization that he can’t escape from aging and entering a new phase in his life. His black hair (signifying youth) has turned white (signifying old age).

Last week, we found out more about the significance and origins of the sheer abundance of haunted hunters that roam through Luxembourg's forests.
______________