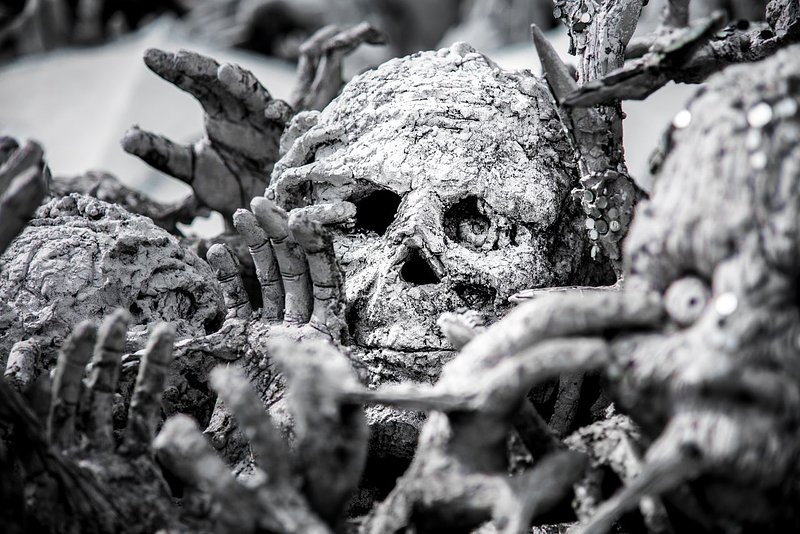 © Photo by Arisa Chattasa on Unsplash.

In his series on myths and legends, Gerry Erang explores some of the Grand Duchy’s lesser-known yet enthralling stories. This week, we visit a city on the border of scenic Moselle river that many Luxembourgers associate with wine hangovers and classy boat cruises: welcome to Grevenmacher!

All mythological roads lead to Grevenmacher. Have you ever encountered a hellish dog while roaming through the street of Grevenmacher (no, not the wine festival revelers) or heard of cursed Longkaulemännchen? This week, we explore three of the most captivating stories from the pearl of the Moselle - and get to know a darker side of picturesque Grevenmacher.

Shame on you if you haven't, but chances are you have seen Peter Jackson's film adaptation of Tolkien's The Lord of Rings. Remember the climactic scene in The Return of the King when Gollum falls into the lava chasm of Mount Doom? Even though the sly creature leaps to his death, he does so deliberately and he meets his end with a sense of profound happiness - the poor guy is finally reunited with the treacherous ring.

© The Lord of the Rings screenshot

Suicidal tendencies combined with abysses and a lust for a material object? Guess what! Grevenmacher's very own Longkaulemännchen pulled that one off before Hollywood made it a thing...

Legend has it that a rather unpleasant man lived near Grevenmacher in the 16th century. The reclusive man led a lonely life close to the so-called Longkaul, a pit-like deepening that can still be found on a plateau on top of the scenic vineyards. Because of his association with the Longkaul and his gaunt stature, he became known as the Longkaule-manikin, or Longkaulemännchen in Luxembourgish.

Grevenmacher's inhabitants also called him "Geldhannes" (Money Hannes) because he was loaded. His wealth was the only thing he truly loved. He was known - and feared- for this material greed and extreme stinginess. Young children in particular were afraid of him because of his long red hair, his unusual clothes and his bad temper. Trump might have liked him though as Longkaulemännchen loved carrying a weapon. Anyway, he was not the kind of person you wanted to encounter in a dark alley after sunset. 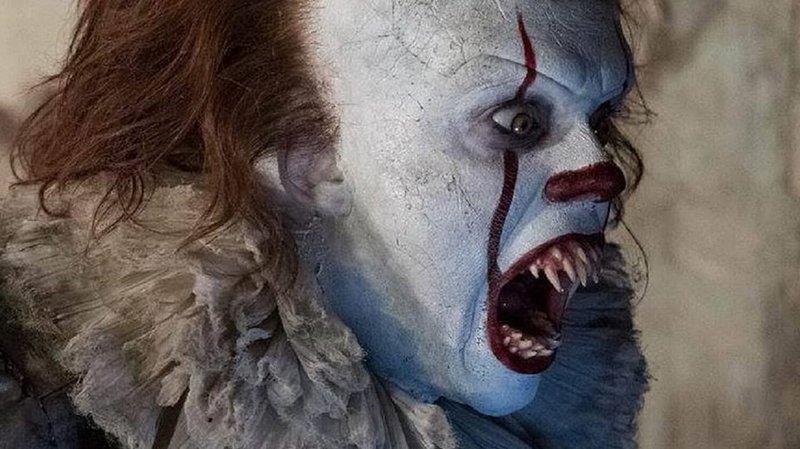 Red hair, an air of twisted obsession and gaunt stature? Chances are Longkaulemänchen looks something like Stephen King's It.

One tragic day, torrential rains saw the Moselle river flood the entire region and the floods pulled all of Longkaulemännchen's possessions into a raging abyss. When he saw that all his wealth was literally flushed down the drain, not-so-poor old Geldhannes started screaming his lungs out before jumping onto his possessions. Like Gollum, he met his end that day but at least he was engulfed by the floods together with what he loved most. In this context, the myth can also be read as a Catholic cautionary tale. The link between materialism and the spacial metaphor of a hell-like abyss should be evident. In the Luke gospels, Jesus himself "said unto them, Take heed, and beware of covetousness: for a man’s life consisteth not in the abundance of the things which he possesseth.”

Collective sigh of relief from Grevenmacher's residents - the old cheapskate was finally gone. The only problem: several months later, spine-chilling screaming and howling echoed through the Moselle valley. Much like neoliberalism, Geldhannes was too mean to die. Each night, the angry fellow reappeared near Longkaul and demanded to be saved. Saved from what exactly you might wonder? Here's the deal: Geldhannes wanted to find someone who was able to curse him into the ground because this was the only possibility to be reunited with his lost treasures that the earth had swallowed during the storm. He had tried his best to remain buried beneath the surface but for some unapparent reason, his body and soul kept magically being pulled to the surface.

Doing everything in their power to get rid of him once and for all, the ever altruistic people of Grevenmacher asked a perambulating priest for help. The priest, of course, knew what to do. Apart from the usual evocations and spells, the solution was rather pragmatic in nature: a heavy cloak made out of lead should do the trick and keep Geldhannes beneath the ground. And behold: gone was the old killjoy once he put on the leaden robe. Collective sigh of relief numero dos.

You guessed it, that was still not the end of Longkaulemännchen. Many years later, he resurfaced and allegedly struck terror in the hearts of many passersby and Grevenmacher residents.

Some say Napoleon managed to get rid of the cursed materialist. But beware, others claim he's still roaming the region and up to no good...

Beware of the ambivalently eerie Moselle dog - a blessing for some... and a curse for others!

Supernatural hellish dogs are regulars in folklore and mythology - even in Remich! According to another legend, the "Muselhond" was a monstrous dog who liked strolling through the city's streets before jumping into the Moselle - and metamorphosing into a man! Despite his scary appearance, he was usually a gentle pupperino that did not harm anyone. Local fishermen for example recounted that the mysterious dog had helped them catch an abundance of fish on numerous occasions. 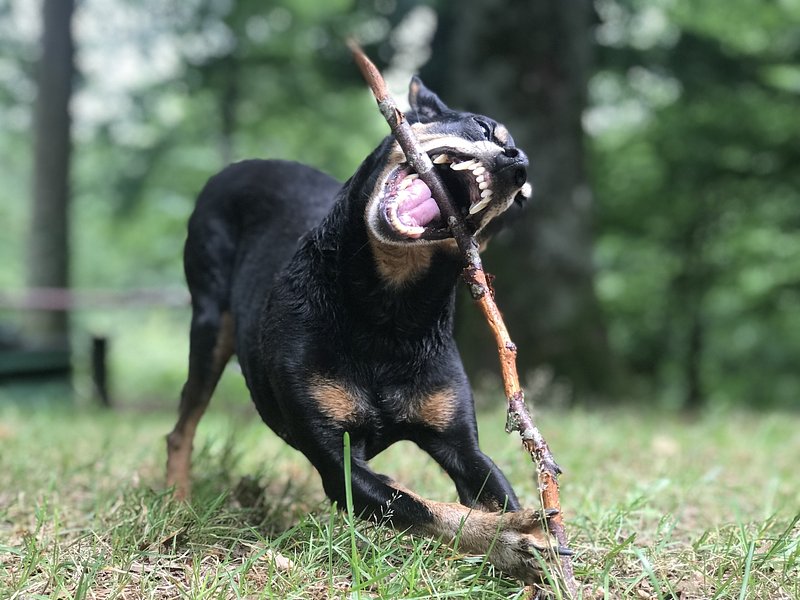 Could Grevenmacher's hellish dog look something like this? RTL Today's Pipo believes that the old Moselle fleabag has nothing on him. / © Gerry Erang

Parents of course used the Muselhond myth to, as the politically correct version would be, raise awareness about the dangers of waterways. In other words, they told their children that the Moselle dog would drag them to their doom if they got too close to the river. Mythological creatures being used as an educational / traumatising cautionary tale? Remember Kropemann? Poor bloke's a similarly terrifying creature that has been used and abused for the same goal.

Child, beware! Is the Kropemann Luxembourg's most terrifying mythical creature?

Well, the subtitle says it all really. Legend has it that a withdrawn old lady was living a secluded life in a rock crevice between Grevenmacher and Machtum. She was widely known as the "Felsefräschen" and locals avoided unnecessary interaction with her because she was downright odd and because she never said a word to anyone. She did, however, brew potions for sick cattle that were famous across the Moselle valley for their efficiency. At the same time, nobody was allowed to enter her dwelling between the rocks and rumours about her abounded. Only at midnight, the people of Grevenmacher could hear her singing and screaming in almost diabolical fashion.

One fine day, a local woman sent her son to the old lady to pick up one of her renowned potions to cure a sick cow. The old recluse immediately took a liking to the young man and lured him into her rocky abode - and did not allow him to leave. Homesick and terrified, the boy tried to escape on three occasions. When his third attempt failed, the old lady was beset by a terrible fit of rage and tore the boy into two pieces. She threw one half of the boy into the Moselle. The other half she devoured. When the authorities heard of the terrible deed, she was proclaimed a witch and burned at the stake. On a historical side note, there were a couple of witch trials in Luxembourg in the 15th century. In 1470 for example, several people (men and women) were prosecuted by the secular authorities  for witchcraft. 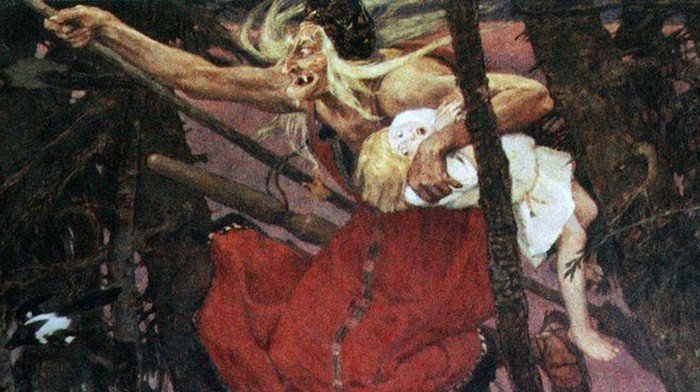 In Russian folklore, Baba Yaga is a ferocious old woman who can ambivalently occur as donor or villain. Some similarities with the myth of Grevenmacher's witch exist. / © Wikipedia commons

Rumour has it her soul still roams the Moselle valley...

There are several other myths that originated in Grevenmacher such as the story of the cursed sneezer, or a fabulous tale combining the devil, a grey stone, and a brother in Trier. More on that in a later instalment...

Last week's instalment was not for the faint-hearted: cut-off hands and ghastly gallows await in Remich and Dudelange!