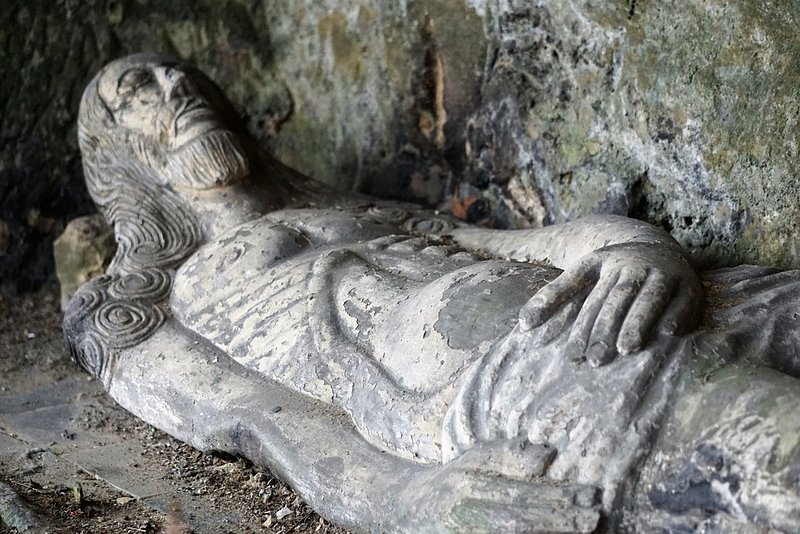 In his series on myths and legends, Gerry Erang explores some of the Grand Duchy’s lesser-known yet enthralling stories. It's time for you to meet the mysterious Peter Onrou in Luxembourg City.

In last week's instalment, we had the macabre pleasure of diving into nightmares manufactured in Luxembourg: the Kropemann is an eerie underwater bogeyman rumoured to live in the Attert river and drag unsuspecting children to their doom.

Child, beware! Is the Kropemann Luxembourg's most terrifying mythical creature?

This week, the Grand Duchy's mythical plot thickens as we escape the watery abode of uncanny kidnappers and flee into the equally corporal realms of adultery, bitter-sweet revenge and, believe it or not, Luxembourgish voodoo. Oh and throw in a splash of religion for good measure.

Peter Onrou is a life-size statue eternally slumbering in a small grotto on Côte d'Eich. The original statue was stolen in the 17th century and replaced in the 19th century. This second statue was restored during the war and replaced by another copy. On top of Onrou’s grotto is another small cave inhabited by a Jesus figure.

You can reach the statue by climbing the stairs leading to Boulevard Paul Eyschen in Limpertsberg. On 9 November 2017, Luxembourg officials classified the statue as a national monument.

Peter Onrou is not just your average monumental statue but also a purging destination for women who have been cheated on. A little-known custom evolved over the years but currently finds itself at risk of tumbling into oblivion: the emotionally wounded women seek revenge on those who betrayed them by engaging in voodoo-like rituals in front of the statue.

More specifically, those seeking revenge come to Peter Onrou armed with a candle that they pierce with needles. When the candle burns down and the needles heat up, the unfaithful man is hoped to feel stinging pain and emotional restlessness. Hence also the name, at least according to some: Onrou is the Luxembourgish word for unrest. 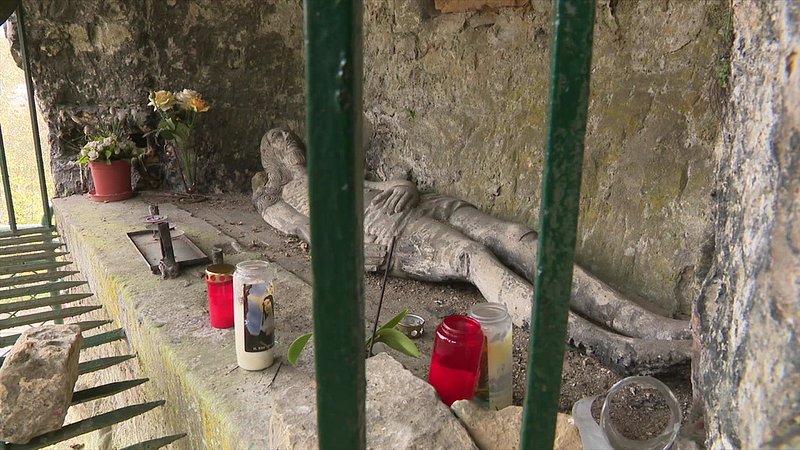 In 1907, Luxembourgish author and playwright Nikolaus Welter mixed prose and poetry to give birth to a key text about the statue and the vengeful custom I mentioned earlier. The story recounts how an unnamed desperate woman seeks out Peter Onrou for emotional support and revenge after her partner cheated on her. What follows is a first literal translation of the story’s key episode, mainly composed in verse:

This is the rock, this is the grotto.
Up there the cross with the grey God.
Down here the pale man of pain,
The silent comforter of abandoned hearts.

She steps closer to the grotto.

My senses are dull, my heart weighs heavy.
I can no longer help nor counsel myself.

Peter Unruh, the wonder man,
He alone can help and counsel.

She pulls out something from her garment. She tries to light a match […]. 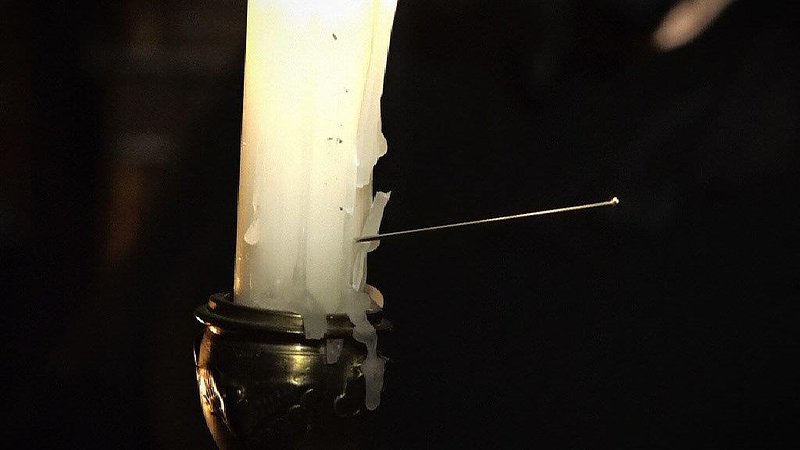 If you have an adulterous partner, why not pay Peter a visit and get some revenge? / © RTL archive

This extract should shed light on the significance of the voodoo-like ritual that I mentioned earlier. The story in itself is a masterful if short piece of Luxembourgish literature. Unsettling silence and a profound sense of loneliness permeate the setting. Literal darkness (the events take place shortly before dawn) figuratively complements the emotional darkness and despair of the tormented protagonist. The figurative and literal darkness is only lifted once she lights the candle in front of Onrou, symbolising the idea that she taken the first step out of her own inner darkness and can finally embark on her healing process. Tellingly, the story also ends once the sun has risen and literal darkness disappeared.

The young woman remains unnamed throughout the narrative, which raises the question to what extent she functions as a representative of all those who have been similarly betrayed rather than an individual. This almost allegorical quality fits in with the archetypal and psychoanalytical symbolism of the cave as a prevalent motif in literary myths. The cave is closely related to the symbolic heart and often functions as a place of transition (think the cave chapters in Forster’s A Passage to India) or epistemological insight (think Plato’s Allegory of the Cave). As such, Onrou’s cave is also a mythical place where the young protagonist reaches self-awareness and begins an inner transition out of victimhood.

There has been much debate about the historical individual behind Peter Onrou. According to some sources, the statue represents Christ. Other historians claim that Onrou could in fact be Saint Crispin or Peter of Verona, a 13th century Italian Catholic priest.

J. Schmit is a scholar who challenges these views and argues that Onrou predates Christianity. Drawing on stories from the Edda and other medieval sagas, he argues that the voodoo-like practice is only a modern invention that deviates from the origin of the statue. The candle, he explains, represents the betrayed woman while needles symbolise the pain she experienced at the hands of the unfaithful man.

Onrou, however, should not be mistaken for a Christ figure but instead represents, as Schmit puts it, an “embodiment of evil, the seducer, the tempter.” More specifically, Schmit argues that Onrou predates Christianity and that his statue represents Loki, the Norse trickster God and father of lies and deceit. He bases his argument on clear textual parallels: diabolical Loki famously seduced Heimdall’s bride Iduna and he was imprisoned in a cave because of his faithlessness and perfidy. Schmit adds that Christians, once paganism came to an end, revisited the cultural site to build a second cave in which they put a statue representing God and Christianity. This second cave is positioned above Onrou/Loki’s cave, metaphorically representing the victory of Christianity over heathenism. 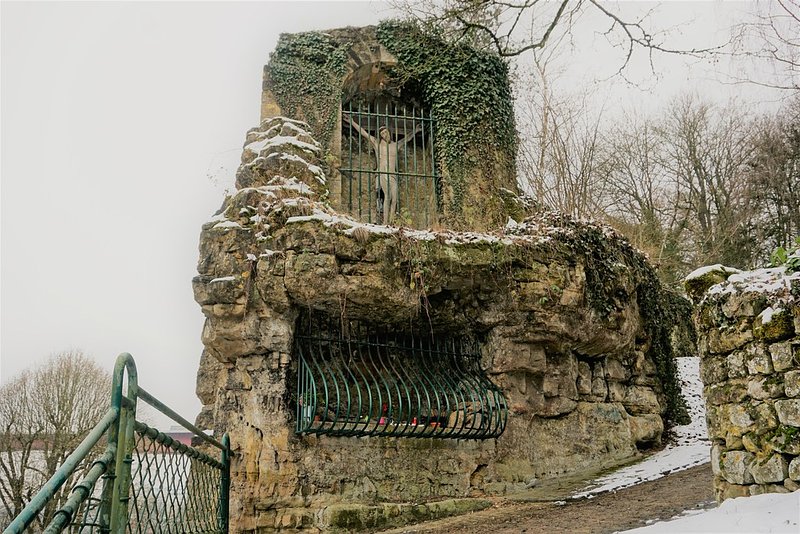 Have you heard of another interpretation? Feel free to email me at gerry_erang@rtltoday.lu. Alternatively, you know what to do if you catch your partner cheating on you…

Special thanks to Maryse Klein and Charles Baustert for sharing the source material that informed this article.