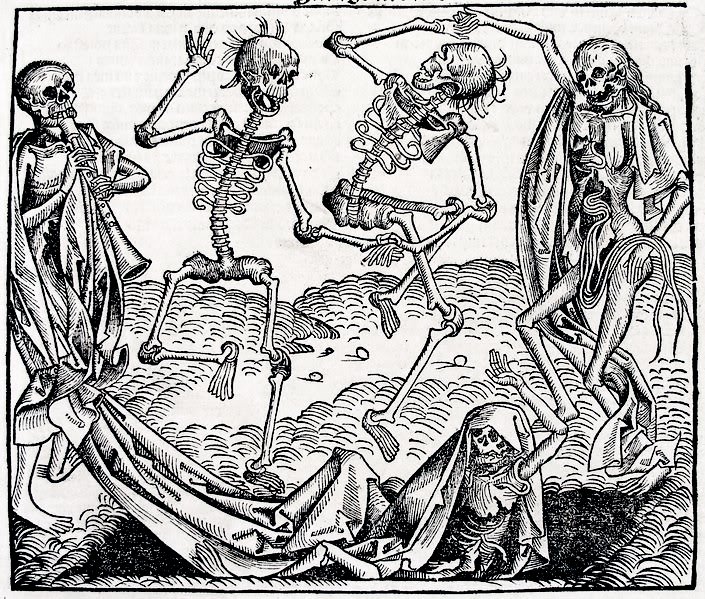 In his series on myths and legends, Gerry Erang explores some of the Grand Duchy’s lesser-known yet enthralling stories. This week, we enter the carnivalesque realm of dancing mania and Echternach's very own wizard. Meet Veit!

Remember Orpheus from those distant Greek mythology classes? The guy's still rumored to be the best musician and poet that ever saw the light of day. Legend has it that he was able to charm all living creatures and even inanimate objects with the golden lyre that Apollo blessed him with. When they heard the sweet notes of the instrument, humans, animals, birds and even stones and trees danced and blissfully followed Orpheus.

Flash forward to the Middle Ages and the legend of the Pied Piper of Hamelin. The famed rat-catcher was allegedly hired by a German town to lure rats away. When the village inhabitants eventually refuse to pay for the service, he takes revenge by using his instrument's magic on their children and leading them away. 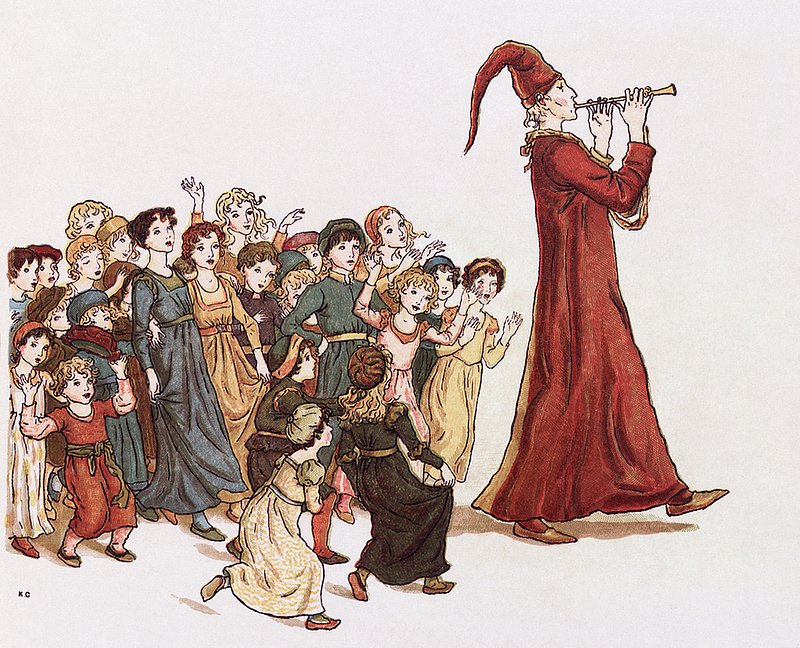 The piper leads the children out of Hamelin... / © Illustration by Kate Greenaway for Robert Browning's "The Pied Piper of Hamelin"

Can you spot the common thread? One taketh a slightly extraordinary character, throweth a magical instrument into the equation, et voila, you've got yourself a myth for the ages. It should therefore come as no surprise that Luxembourg has its very own musical enchanter. Let's take a trip in space and time. Welcome to Echternach, 729 AD.

The myth of Veit the sorcerer

French occultist J. Collin de Plancy published one of the earliest written accounts of the legend in question in the "Luxemburger Zeitung" in 1858.

Centuries ago in 729 AD, a young man called Veit lived a normal life in Echternach. He had only recently converted to Christianity with his wife and the married couple eventually decided to embark on a pilgrimage to the Holy Land. 10 years passed and nobody in Echternach heard of them. Unsurprisingly, the town started to believe that the couple had perished during their travels and Veit's relatives split up his possessions between themselves.

Their astonishment was correspondingly tremendous when Veit returned to Echternach 10 years later. His wife, however, had been killed by Saracens and her unexpected death plunged Veit into misery, depression and poverty. The only thing he brought back to Echternach with him was an unusually-looking violin. When they realised that they would have to give Veit his belongings and property back, his deceitful relatives decided to accuse him of the murder of his wife. Veit was found guilty and sentenced to death by hanging the next day. As a last favour, Veit asked to be allowed to carry his violin with him on the day of his execution. His wish was granted.

As he approached the gallows in front of countless gleeful spectators, the young man looked up to the sky, prayed to God and eventually started playing his violin. The effect was otherworldly: overcome with emotion and intoxicated with joy at the sound of his tunes, the crowds started dancing ecstatically all over Echternach. Even the grim hangman left the gallows and joined the merry dancers. The entire town danced until the sun set except for Veit's treacherous relatives - they were unable to stop dancing around in a circle for an entire year.

Only the intervention of Saint Willibrord was able to break Veit's spell. Veit, meanwhile, had disappeared.

"Beim Laange Veit" (At tall Veit) cafe in Echternach.
Veit with his violin @ Café beim Laange Veit. / © vanderkrogt.net
Statue of Saint Willibrord in Echternach. / © Palauenc05 / Wikipedia
The photos published on this site are subject to copyright and may not be copied, modified, or sold without the prior permission of the owner of the site in question.

Ever heard of Echternach's dancing procession? Veit (maybe) started it

According to some, the myth of the Veit-induced dancing mania later gave birth to Echternach's well-known hopping procession, an annual dancing procession that still exists today.

The event is held every Whit Tuesday and honours Willibrord, the patron saint of Luxembourg and founder of Echternach Abbey. And yes, same guy that broke Veit's spell and saved the town from its dancing fever. 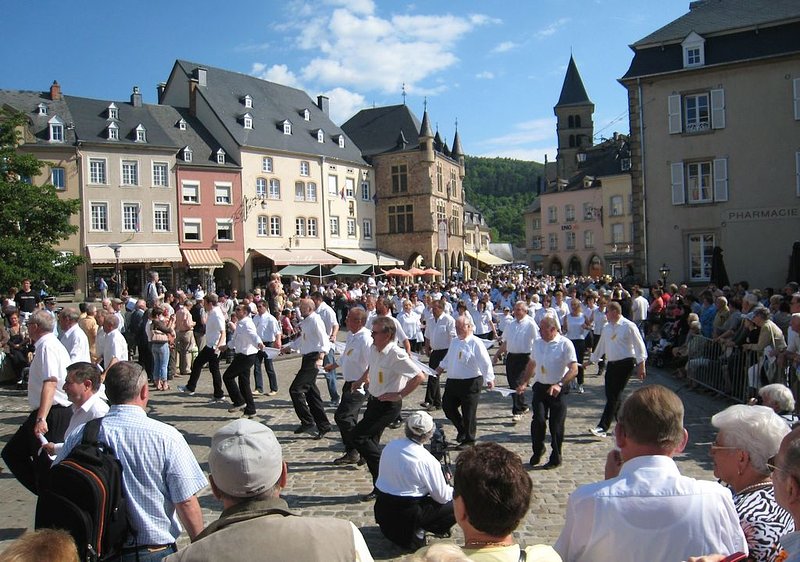 There are clear parallels between the mythical Veit and Saint Vitus (Veit in German), a Christian Saint from Sicily who died as a martyr in 303. In the late Middle Ages, people in Germany honoured the saint by, you guessed it, dancing in front of his statue. He was also the patron saint of dancers and entertainers more generally. Luxembourg's Veit may have been modeled on the historical Saint Vitus.

On a side note, dancing mania, as unbelievable as it seems, is actually a historical reality that occurred repeatedly during the Middle Ages. Dozens of medieval sources recount incidents of uncontrollable collective dancing on the area along the Rhine and in Strasbourg. Scholars and historians are still somewhat puzzled but came up with several theories. The most likely reasons are religious euphoria, ergot poisoning causing hallucinations or mass psychogenic illness.

A legend for the ages

Numerous Luxembourgish artists have revisited the myth of Veit and his magic violin. Composer Lou Koster for example achieved great success with her choral ballad Der Geiger von Echternach (The Echternach Fiddler), which she completed at the respectable age of 85. It premiered at the Abbey of Echternach in 1972.

The most famous literary reworking of the story is Nik Welter's ballad "The Echternach Fiddler." 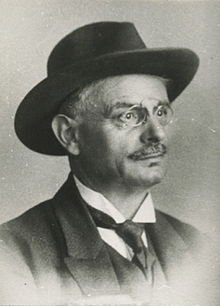 What follows is a first translation of the central part of the ballad, which is when the music starts to work its wonder.

But the vengeful violin already started to sing,
and in hopping haste
the musical notes came flying in,
making the listeners dizzy;
quicker and quicker like resounding waves,
exhilarating the hearts, entrancing the senses
like the laughing ghosts of the wine,
that in sunny waves
bulge in the veins,
foaming up to the brain,
fizzing in dreams.

In inexhaustible waves,
the musical notes came flying in,
putting man and woman
irresistibly under their spell.
With open mouths they listened
notes of flattery and courtship,
glowing glances they exchange,
clandestinely holding hands,
moving their fingers in strict time,
rocking their heads, rocking their bodies,
suddenly gripped by fever
[...]

Last week, we roamed through Steinsel's forests and thought about why you might see a distressed maiden with bloody nails frantically digging a hole in a the ground before vanishing on a fiery horse.

Gerry Erang is an editor and translator for RTL Today with a background in English Literature. He believes you should indulge in dancing mania from time to time.