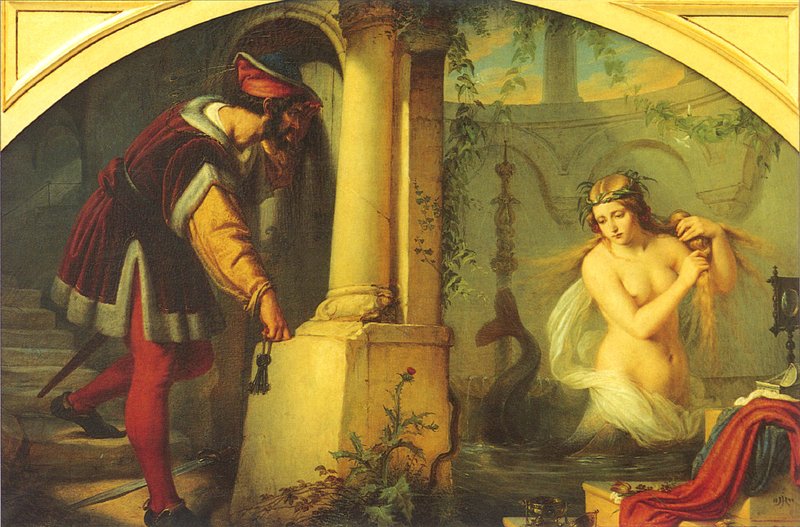 In his series on myths and legends, Gerry Erang explores some of the Grand Duchy’s enthralling stories. This week, we revisit the legend of the entrancing Melusina, which is part of the founding myth of Luxembourg City.

Last week, we joined Siegfried as he struck a Faustian pact with the devil. Sell your soul for the cold hard cash and materialism you need to get good old Lucilinburhuc in all its Catholic glory rolling? Deal!

LLL: Did you know that a deal with the devil led to the foundation of Luxembourg City?

The story of Siegfried and the diabolical pact is a lesser-known version of Luxembourg's foundation myth. Chances are you've heard of the legend of Melusina, which is even more intrinsically interwoven with the story of Siegfried and the foundation of Luxembourg City. Before we dive into mythological waters and take a closer look at the Luxembourgish legend, it's sensible to stress that Melusina, like most very attractive hybrid creatures, is not exclusive to the Grand Duchy. Quite the opposite, Melusina (or Melusine) is a recurring figure in European folklore and mythology. There are various different versions of the same myth which usually only alter in the specifics. Depending on the source, Melusina can for example boast a somewhat sobering fish tail and sometimes she's depicted as a serpent from the waist down.

The famous literary example of the Melusina tale (sorry Siggi, you've pretty much sunken into oblivion outside of Luxembourg), is Jean d'Arras's The Romans of Partenay or of Lusignen: Otherwise known as the Tale of Melusine, which dates back all the way to 1394. The story details the intricate relationship of Melusine and Raymodin and exhibits several plot lines that echo Luxembourg's version. Like Siegfried, the king of Albany for example goes hunting in a forest and comes across the most beautiful woman he's ever beheld. Like our dead founding father of Luxembourg, he also falls prey to his testosterone levels and cannot live without her. His sweetheart ultimately agrees to marry him - under one crucial condition: he's not allowed to watch her when she births or bathes her children. Yep, you guessed it. He violates the taboo and all hell breaks loose.

Luxembourg's version of the myth is a hybrid mix between these earlier literary accounts and simultaneously incorporates key literary motifs from even older mythologies. Siegfried, as we will see, is for example initially enraptured by Melusina's singing. Singing fishwomen who pull unsuspecting travelers under their spell? Chances are this rings a bell. Remember Homer's Odysseus? The hopelessly romantic globetrotter also had a brief encounter with Melusina-like creatures: the Sirens! 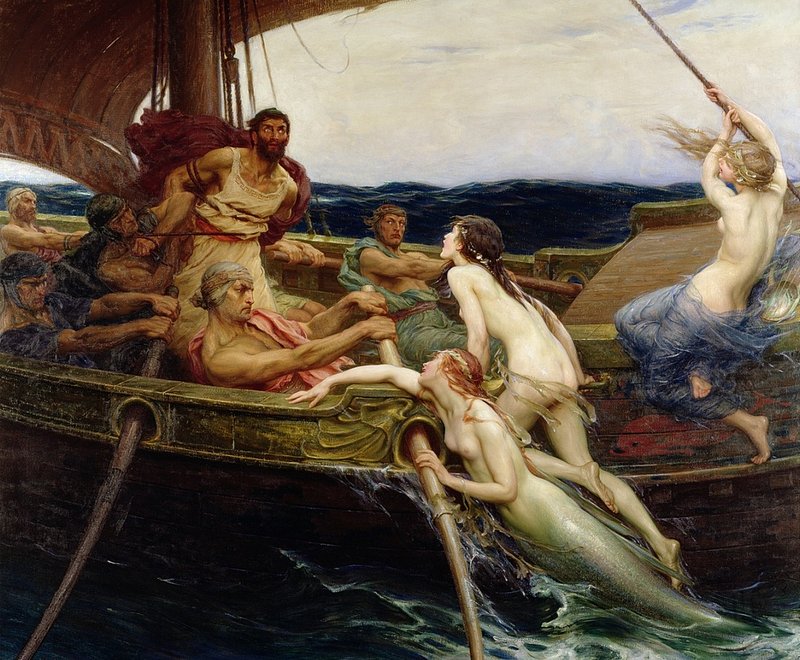 Odysseus resisting the song of the sirens by having his crew tie him to the mast of the ship and fill his ears with beeswax. / © Public Domain

The myth: save Melusina or be buried under the rubble of Luxembourg City

Nikolaus Gredt's account of Melusina in his Sagenschatz des Luxemburger Landes is one of the most complete texts about the myth. Let's get started.

Many centuries ago, Count Siegfried was living the good life in his castle in Koerich. His love for hunting got him into a bit of a hassle on one memorable occasion: he got lost in the woods and, as Gredt puts it, ended up in a "deep, tight, wildly overgrown valley." I'll refrain from expanding on the sexual symbolism of the story. The valley in question, as it turns out, was the Alzette Valley. Siegfried contemplated the picturesque surroundings - until he head some of the most wonderful singing that had ever reached the knight's presumably waxy ears. He listened for a while and rushed towards the lovely tune. There she was, sitting next to a derelict Roman castle: Melusina. Siegfried was thunderstruck. The young woman was the most beautiful person he had ever beheld. Melusina, however, played hard to get and vanished into the sunset.

Siegfried was so overwhelmed by the "heavenly apparition" that he did had to take a little nap first. The next day, he eventually found his way back home.

The smitten count, however, could not get the mysterious woman off his mind. Only one solution if you're a lovesick Count in the tenth century, there's only one thing you can do: throw a ring on her finger. Siegfried frequently returned to the Alzette Valley, hoping to meet her again and woe her. The day finally came. After a brief and relatively uninspired love declaration, she was all his - under two crucial conditions. Yes, 10th century marital agreements seem to be a thing. First of all, she would only become his wife if she never had to leave her beloved rock. The second condition? Siegfried would never be allowed to see her on Saturdays. Siggi took an oath that he would respect her demands. 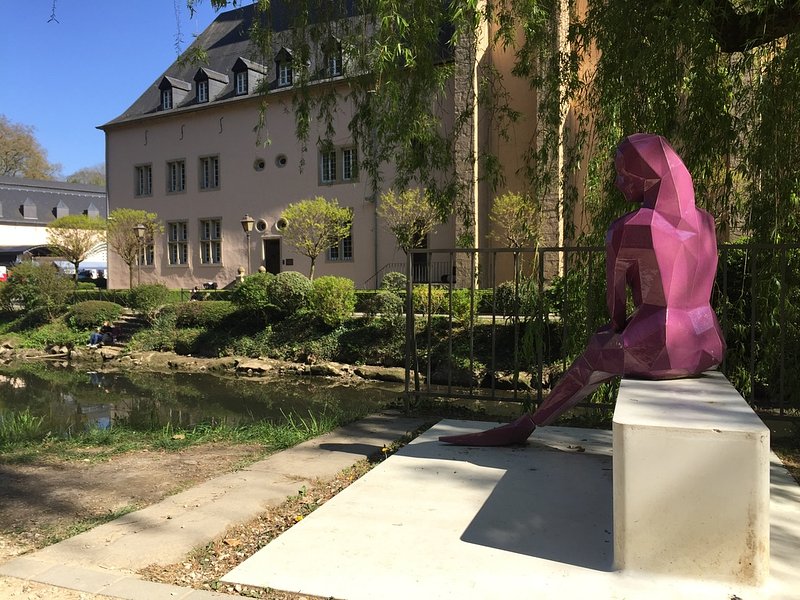 Melusina sitting on the shore of the Alzette river, in the same spot where the tragedy is rumoured to have unfolded centuries ago. The sculpture by Luxembourgish artist Serge Ecker was designed on a computer and printed in 3D. / © RTL archive

The Count acquired the Vock rock, the Roman fortress and the surrounding land from the Abbey of Saint-Maximin in Trier. The abbey, in exchange, received land Siegfried owned in Feulen. This is also where Siegfried's Faustian pact with the devil that I discussed last week comes into play - without batting an eye, Siegfried sold his soul to the devil in exchange for the funds he needed to build a magnificent castle to be close to the love of his life. Romantic or toxic?

The couple lived happily together for many years and Melusina gave birth to seven children. Each and every Saturday, she vanished into her chambers and was nowhere to be seen for the entire day. Siegfried gradually grew increasingly suspicious? What was Melusina's mysterious disappearance all about? One night, he committed the 10th century equivalent of reading your partner's texts while they're in the shower. Siegfried tiptoed to her room and peaked through the key hole. Instant regrets. Inside the room, Melusina was combing her hair and looked as beautiful as ever. With one major difference: she boasted a horrible fish tail instead of her usually delightful human feet. Siegfried shrieked in horror and, in the very same moment, Melusina fell into an abyss that opened up beneath her feet, forever to be lost to her husband. The wet nurse, who was looking after the couple's youngest child, later recounted that a white apparition sometimes made its way into the baby's room to rock its cradle.

Legend has it that Melusina only appears in human form every seven years, begging unsuspecting passersby to break her curse. You might wonder... how can I free her from the terrible affliction? According to the myth, you have to go to the Dominican Church and stand in front of the altar at midnight for nine consecutive days. Once you've done this nine times, Melusina will appear in front of you and you'll have to use your mouth to take a key out of her mouth. The catch? Melusina has taken the form of a fiery snake. Once you've got the key, you have to throw it into the Alzette river.

Melusina only has one shot at being saved every seven years. When the curse remains unbroken, she continues weaving a shirt - adding one stitch every seven years. This might be another parallel with Homer's Odysseus as Penelope is weaving a burial shroud for years to trick suitors while awaiting her husband's return. The Melusina myth ends on a sinister note: if no human is able to save her, she will have to save herself by finishing the shirt. Her curse will be lifted when she's done weaving - at a terrible price. "the rubble of Luxembourg City will serve her as a grave."

You know the drill, ain't no good myth without an interpretation

Interpretations of the myth vary. Feminist critics have claimed that Melusina represents the idea of the feminine body as being fundamentally other. In this context, the serpent imagery of course links back all the way to the snake in the Garden of Eden, the notion of  women as temptresses, and so on.

Marxist readers like Jacques Le Goff argued that Melusina represents a figure of economic fertility: "she brings prosperity in a rural area...Melusina is the fairy of medieval economic growth."

And finally, my own two pessimistic cents. Feel free to disagree! In a nutshell: the Melusina myth has a distinct allegorical and sociopolitical dimension to it. I would argue that it shows that absolute truth is, to put it blatantly, downright deadly. Neither a relationship nor a society can function if partners or citizens and politicians are completely honest and refuse to create a persona for the outside world. The relationship between Siegfried and Melusina is characterised by absolute bliss - as long as the truth does not come out. As long as the two partners believe in an idealised image of each other (Melusina the beautiful and excitingly mysterious wife / Siegfried the trusting and unconditionally loving husband), the relationship functions. As soon as they show their true essence to each other, the relationship crumbles.

The same hold true for a society more generally. Because of Siegfried's quest for truth, Luxembourg City risks being destroyed. Siegfried the Snowden-like 10th century whistle-blower. If he had not pursued the truth, Luxembourg City would not be in danger. Can a society, like a relationship, sometimes function better without absolute truth? Food for thought.

In last week's article, we analyzed an alternative version of Luxembourg's foundation myth: when Siegfried struck a Faustian deal with the devil!

Gerry Erang is an editor and translator for RTL Today with a background in English Literature. He still hasn't succeeded in saving Melusina, and she's not returning his calls.