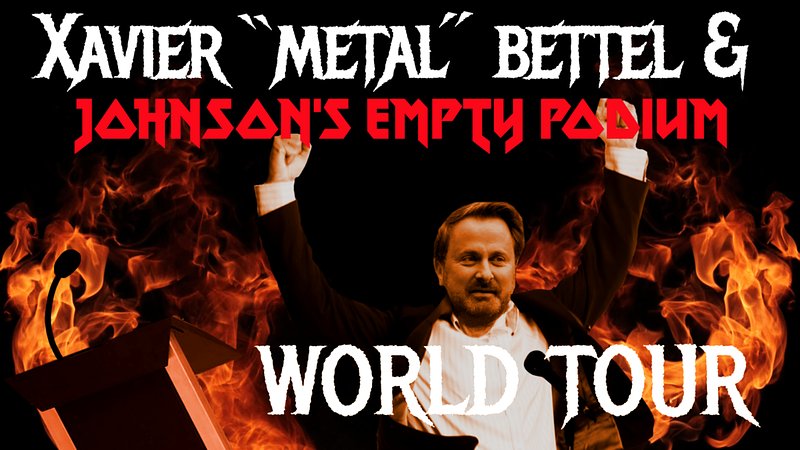 In a move that will delight his supporters, Luxembourg prime minister Xavier Bettel has announced he’s going on a 28-nation world tour, and joining him will be the very podium that earned him so much international attention earlier this week.

The podium, 130 centimetres in height and made from locally sourced wood, catapulted Bettel to stardom on Monday when it went unused by visiting British prime minister Boris Johnson, who absconded from a press conference, giving the Luxembourgish prime minister a chance to give the absent Johnson a tongue-lashing.

“We’re calling our tour ‘The Empty Podium Experience,’” Bettel said. “And wherever we go, I’m going to chastise Mr. Johnson, in absentia, of course, exactly as I did in Luxembourg.”

“It’s going to rock,” he added. “We’ll have 30-metre flames shooting up on both sides of the stage, a giant steel effigy of Mr. Johnson, and a 12-tonne mechanical dragon that will shoot EU-coloured laser beams at him.”

Each concert will end with a children’s choir singing the Anthem of Europe and fireworks that form an image of the flags of Europe and Luxembourg holding hands, says concert promotion company DP.

“How could I not keep this momentum going?” Bettel said. “Did you see how my fans, I mean, the international press went wild after I gave ol’ Johnson the score and told him we weren’t so keen on his Brexit? They loved me.”

“I made the headlines in 134 major newspapers," he said. "I know because I counted. And the Twittersphere was lit up like a grill at a village summer schoulfest.”

Affirming that his British fans, particularly those who live abroad and are opposed to Brexit, are of utmost importance to him, Bettel said he and the podium are going to make stops in places with large numbers of British residents, including Amsterdam, Paris, and Toby’s Fish and Chips in Magaluf, Spain.