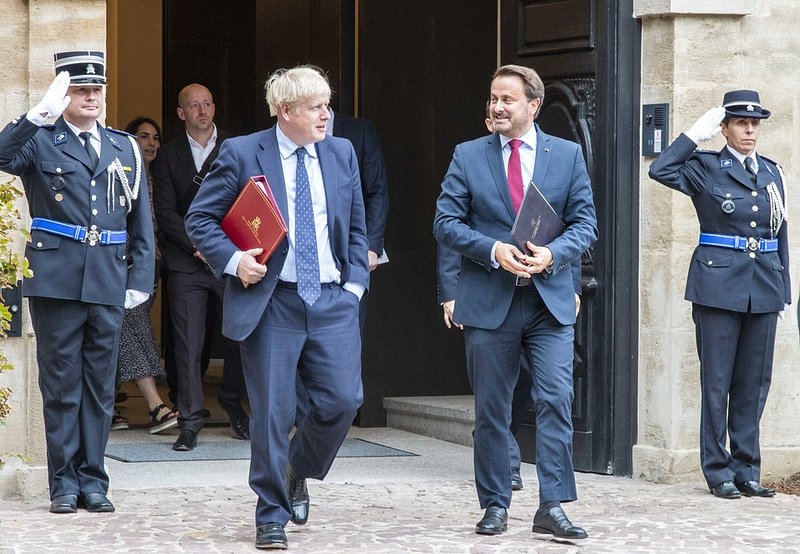 What shaped up to be a historic day in Luxembourg ended with a whimper rather than a bang.

A tale of woe of a press conference that didn't quite go as planned, of tormenting questions still unanswered, and of a self-proclaimed super hero who fled rather than confronted.

Remember remember the 16th of September. It was, after all, Johnson's first face-to-face with European Commission President Jean-Claude Juncker since he replaced Theresa May as the UK's Prime Minister, and an eventfully uneventful day at the Ministry of State with Luxembourgish counterpart Xavier Bettel. It was also a day of utter tragicomedy.

When I arrive, a small yet vocal crowd of protesters has already formed outside of the ministry. David Pike is one of many "concerned citizens" who are ready to fight for their future - even if that means taking on the Hulk. Johnson's "policy and pursuit of a hard Brexit" are a "complete catastrophe," he tells me. It's a catastrophe for "not only for the UK, for Luxembourg, for our European partners - but also very personally for many of us (...) whose rights are directly affected by Brexit and particularly a hard Brexit." Luxembourg on the other hand, Pike stresses, "has been more than accommodating." Full interview here.

As a reminder: in case of a no deal, British nationals no longer enjoy the right of Union citizens. Instead, they are considered third country nationals and subject to the rules governing entry and residence of third country nationals. And tension is rising - both for UK citizens living in Luxembourg and Luxembourgish citizens living in the UK. Only last week, the Home Office published a 99-page document detailing immigration rule changes - just before Johnson prorogued Parliament, leaving no time for parliamentary scrutiny. Fears arose that EU citizens could have their settled status revoked under certain circumstances, for example when mistakes were made during the application stage.

Back to the tragicomedy of 16 September. After spending some time with the protesters, time to head in. I get in place equipped with a tripod that refuses to comply with its duties almost as stubbornly as our antihero du jour. All international media outlets of distinction are present, Luxembourg in the spotlight. Initially, a sense of restlessness and expectation among the journalists. But the tragicomedy unfolds. Or tragically doesn't unfold. Waiting. Waiting. Waiting. And silence. It's been years that I read it but I suddenly remember Beckett's "Waiting for Godot" more vividly than ever. Journalists yawning and looking at their wristwatches.

Some cheers for Xavier Bettel and Michel Barnier.

Johnson eventually arrives - and is immediately booed by the protesters outside of the gate on Place Clairefontaine. Like Luxembourg itself, the crowds are small - but powerful. Angry chants ranging from "disgrace," "tell the truth, stop the coup," "Boris is a liar" and some even less flattering insults I cannot reiterate here animate the usually so blissful and quiet Place Clairefontaine. "Ode to Joy," which Europe has adopted as its anthem, is also played.

Johnson and Boris vanish inside the Ministry of State- and the waiting begins anew. 45 minutes later, the meeting ends anticlimactically with the Incredible Hulk devolving into, as many social media users have pointed out, Invisible Man. Bettel and Johnson step out of the building, both politicians with a pained smile on their lips. In disbelief and helpless amusement, the journalists look on as the two politicians stroll away from the press point. Bettel eventually returns. Meanwhile, a rattled-looking British Prime Minister fails to turn up at his own press conference and runs away from protesters (read: his own citizens). But with Brexit approaching as fast as Boris fled the scene and uncertainty still pervading, it is not the right time to joke - a fact that Luxembourg's Prime Minister Xavier Bettel insisted on.

Looking somewhat disillusioned, Bettel returns to the press point alone, taking his place next to an empty podium... and calling a spade a spade. Luxembourg's Prime Minister explains that he believed it "it was important to speak with Prime Minister Johnson to get proposals." At the same time, "we need more than just words." Bettel added that he would not grant "another extension just for the sake of granting another extension."

"You can't hold a future hostage for party political gains."

"So now it's on Mr Johnson. He holds the future of all UK citizens, and every EU citizen living in the UK, in his hands. It's his responsibility. Your people, our people, count on you. But the clock is ticking. Use your time wisely." Video and transcript of speech here.

While Bettel called Brexit a "nightmare" and implied that Johnson was beating around the bush to waste time, the British Prime Minister later told media that "there's been a lot of work" and that "papers have been shared."

It remains the great BoJo paradox: how is it possible that an endless sea of words is no different than... silence?

Gerry Erang is an editor and translator for RTL Today. The views presented in this opinion article do not necessarily reflect those of RTL.