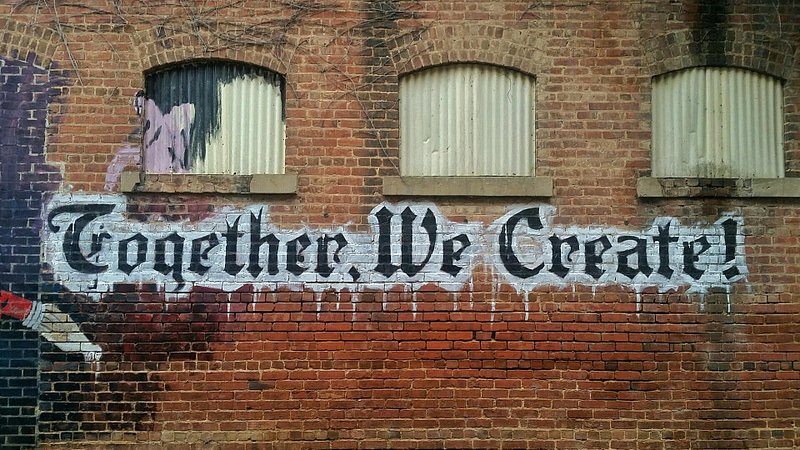 KuK, Live aus der Stuff, #literaturliwwereronline… During the lockdown, artists all across Luxembourg have found new ways to distribute their art to the public. It is high time for them to reclaim the Grand-Duchy's cultural scene for themselves and dismantle the elitist structures that ruled it until now.

The cultural scene in Luxembourg has always been a bit "special". People involved in the arts, whether they would be artists themselves, curators, or fans, always seemed like they were part of some kooky private club. Newcomers to the scene had it difficult and the scene lacked approachability.

The author of this piece experienced this himself when he first started out as a writer. The scene in the Grand-Duchy is very "dispersed", and often you get the impression that those who are involved are more like a pack of lone wolves, mumbling and grunting their favourite poems in dark alleyways in quartier de la gare.

When the lockdown happened in March, every cultural activity, like any other in the country, was put on hold. For a moment everything stood still. Especially those used to performing on stage had to cancel events and were trapped at home. An uneasy and frightening time for many, especially those whose income depended on their art. However, such extraordinary times have always been great opportunities for extraordinary projects.

One of the best-known Luxembourgish songwriters of our time, Serge Tonnar, was one of the first to step forward with his project "Live aus der Stuff" ("Live from the living room"). Others followed his example, which resulted in an amazing cultural offer online: Public readings both from established authors (via the YouTube Channel of the National Centre for Literature) and young talents (on literary critic Jérôme Jaminet's channel and social media pages), as well as live music, e.g. here on RTL Today, just to name a few.

Were most of these projects improvised and often raw in their delivery? Sure. After all, you could not really send a whole camera team to an artist's house and record everything in 4K resolution. I would even argue that precisely because everything had this "homemade" feel to it, it felt very genuine and close to the viewer. My generation grew up with the internet and YouTube videos, and I have always felt that a major appeal of this new form of content is that anyone can share their talents in a very immediate way.

However, it would soon become very clear that not everyone saw it that way. On 17 April, an article was published in the newspaper "D’Lëtzebuerger Land" by a well-known Luxembourgish theatre critic. I have to admit that at the time, I did not know who this person was. After reading the article, I did however realise that she seemed surprisingly upset by artists bringing joy to their audiences via the internet.

Using very unflattering terms, she complained mainly about the audio and video quality of the clips, even going as far as posing the infamous "Is this even art?" question. The whole article dripped of privilege and it was very apparent that the author was used to experiencing art in fancy art galleries and glamorous theatres.

Artists of the court and culture as an upper class accessory

The attack was very revealing in several ways. Before corona, the culture scene that did exist in Luxembourg was very elitist. The people at the top, like the author of that infamous article and others like her, were used to picking the art and the artists that would get all the promotion and marketing to rise to the surface of the vast lake that is the Luxembourgish art scene. Art was very much understood as being "aristocratic", with only certain people being "knighted" as official artists of the court, rather than democratic.

In many ways, corona did to the arts what it did to other aspects of our lives as well. By shutting down the "traditional" institutions and systems, it allowed room for the general public to take initiatives themselves. People like Serge Tonnar and Jérôme Jaminet used this opportunity to not only give many brilliant artists a platform, but also to show us and especially the artists that we do not need the old institutions.

In the case of Tonnar, he decided to take his project to the next level with the launch of "KuK – KulturKanal fir Lëtzebuerg". With social restrictions being lifted, the production budget has now increased, and professional camera crews are involved again – so maybe the author of the "Land" article can now finally also enjoy the art in peace. However, the main idea remains the same: Bringing artistic visions, sometimes unusual or risky ones, to life and broadcasting them via social media so that a large part of the population can enjoy them.

However, it did not take long for yet another column to criticise this new form of artistic distribution. This time the article in question was published in the newspaper "Tageblatt" and mainly attacked Tonnar as a person by using a performance by the Grand Duchess Maria Teresa on KuK as an excuse to accuse Tonnar of aggrandizing himself and imposing himself on the Luxembourgish cultural scene.

All of these discussions boil down to one fundamental issue for me: How art is distributed. How can artists reach those interested in experiencing their works? I mentioned before how the Luxembourgish scene, and many others, were organised in a sort of "aristocratic" way and I want to get back to that notion now.

An artificial sense of democracy

In pre corona times, artists were often dependent on institutions or third persons. While art has this aura of free expression and going beyond worldly restrictions, the reality was very different to its ideals. While creating the artworks was never the problem, the process of sharing and distributing them was on the other hand tricky and sometimes overwhelming.

Some artists may perceive themselves as "outsiders" or "not part of the system" but the truth is that the cultural scene works by the same capitalistic principles as the rest of our economy. Publishing houses, labels, event organisers…: All of the institutions and people that are supposed to promote art and help artists reach their particular audience are subjected to the curse of profit. Money makes the world go 'round and sadly it also dictates what sort of artworks will be pushed and which will be left in the dust.

As the sector is tied to money, it naturally creates a power concentration where the cash already is. We see the effects everywhere: Giant corporations like Amazon crush the small book shop around the corner, cookbooks and "celebrity" biographies rule the best-seller lists, and young people studying any discipline of the humanities are seen as "wasting their education". Certain artforms have almost become impossible to publish. If you are trying to start out as a poet from scratch today, I wish you the best of luck.

All of this has the consequence that the artist is forced to pathetically market himself. If I read some of the letters I wrote to publishing houses back in 2016 when I tried to get my first poetry collection published today, I really have to make an effort to suppress my gag reflex. Why do I have to convince some complete stranger that my art is definitely going to make him/her some money? Quincy Jones once said in an interview with Rolling Stone that "God leaves the room once you talk about money". It really is an absurd and sad bargaining game.

This is however exactly why the recent changes are so important. Suddenly, we are witnessing a sort of "democratisation" of the cultural scene. Artists are using the possibilities of our digitalised world to distribute their art themselves. They have become their own publishers, agents, marketers, and production companies.

Collectives are starting to form again as artists are beginning to realise that by combining their voices and talents, they can create their own stage to express themselves on. It may be a "rustic" stage with some loose nails here and there that we will have to fix while moving along. It may also not look quite as nice as the old one the institutions and elites built did. But it is something of our own.

Maybe you are still not convinced of how elitist our conception of culture was up until now. Fortunately, there is another indicator of the warped perception of art that has built up, and it is sadly very present here in the Grand-Duchy: We have a very depressing tradition of suing artist for the art they produce. More precisely, it seems that when art is being used by individuals or groups not considered "knighted artists of the Grand-Ducal court" to point out serious social issues and flaws, it is not seen as art but as hostile action against the system in place – circumstances which fellow writer Maxime Weber has been pointing out in his brilliant blog posts for years by the way. Rapper Turnup Tun and the collective Richtung22 are just some of the more recent examples of this attempted suppression of the artistic voice.

While Turnup Tun was taken to court by an unfortunately well-known figure of the right for having been called out for his comments in one of the artist's rap songs – a trial which I am still shocked to admit has actually taken place – the artists of Richtung22 stepped on the toes of sensitive officials.

Just recently they took part in the worldwide protests against police brutality and erected a pop-up monument in Bonnevoie commemorating the unsolved shooting of an individual by police officers in 2018. A short time later they received a letter by the police, informing them that they were being investigated for "insulting police officers and the police as an institution". The monument as well as the letter by the police can be seen on the collective's Instagram and Facebook pages.

These are not isolated cases. These are direct consequences of a rigid system that does us absolutely no good. Sure, our Ministry of Culture may be very proud to participate in a high-class exhibition in Dubai. But while we cater to the super rich, we lose so many diverse and talented voices in the morass of a system whose only interest is to keep itself in place.

The word "democracy" comes from the Ancient Greek dēmos meaning "common people" and kratos meaning "rule" or "strength". While we use this word a lot, it often seems that we have forgotten its true meaning.

Knowing this, I say it is high time that we truly democratise our society. In the case of artists, this means taking back real control over our art. If corona has brought the old world to a halt, then this also means that the time is ripe for a new world to take form. And maybe this time, it will be a world in which the growth of the human spirit is finally more important than that of the economy.