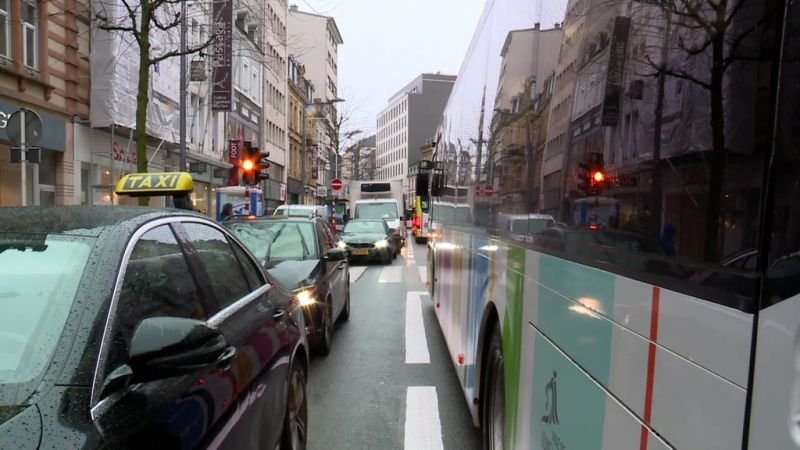 The current situation in Luxembourg is untenable, not least if you rely on public transport to get anywhere.

The government wants us to rely less on cars, more on public transport. From free public transport (which I'm not wholly convinced by - and neither is my colleague) to the new tram, that much is pretty obvious. This green (as in eco-friendly, not the party) initiative is certainly laudable, but as things stand right now it's simply not tenable.

The tram, in fact, is part of the problem at the moment. We have known that construction would start around the Gare area of Luxembourg city for rather a long while now, yet it seems to have caught planners rather off guard. Surely they must have known that road closures and public transport rerouting would cause new stress points, so why do these appear so poorly planned for?

I had booked a badminton court at Kockelscheuer the other week, and in theory it should take me about 35 minutes to go get there from Lorentzweiler - quick train to the city station, then hop on the 18. Both journeys take about 15 minutes. Still, aware of the traffic situation (this was on the 2nd day of the new tram works), I set out an hour and twenty minutes before my court booking time.

Got to the station fine, but from there... it was simply impossible to get to Kockelscheuer. A number 18 showed on the bus tracker at the stop, due in 10 minutes or so, but disappeared. The next one, same deal. I checked the app, which informed me that there should be a bus soon — one that was running 43 minutes behind schedule.

It showed up just in time for me to theoretically make it to Kockelscheuer in time, or at least not more than 5-10 minutes late. So I hopped on, and... we got as far as Rue Wenceslas 1er, literally a couple of hundred metres, before the journey came to an end. The bus driver called out to suggest that anyone who could walk to their destination, or catch another bus, would be wise to do so - because "we will be here for a long time."

I hopped off to see what the situation looked like, and traffic was stuck in both direction — because the road ahead, which was also being worked on, wasn't wide enough for two-way traffic. So no one could move. Brilliant. I had to call my badminton partner, who had wisely cycled there, to let him know I couldn't make it.

Similarly, I couldn't take the bus from work to the Pfaffenthal station on Monday because the app showed they were up to 61 minutes behind schedule. Over an hour! Several showed up on the app as cancelled as well. Luckily there is another stop I can walk to some 10 minutes away, where I was able to grab another bus - but of course I missed my train, and had to wait around in the cold for nearly half an hour. Luckily the train wasn't cancelled, though heaven knows it wouldn't have been the first time.

There must be a better way

While there is a free bus to help you get around some of the roadworks, this honestly seems of rather limited use for most of us. It doesn't alleviate any of the issues I experienced, nor could it - if anything, it would seem to add to them. Part of the problem that I saw around the Gare was that buses were basically piled on top of each other in the crossing trying to get to the station, so adding to this seems.. counter productive at best. But hey, I could be wrong.

Either way, I've been through all of this before. I had the distinct displeasure of living in Edinburgh as that city was building up its rather useless and highly unnecessary tram line, and that project certainly wasn't free of faults either. It took much longer than planned, and cost far more. It also impacted business, much as we're seeing in parts of the city at the moment.

But one thing it did not do was affect the operation of busses which, while partially rerouted, largely managed to keep to their schedule.

As it stands, some of Luxembourg's buses have essentially been rendered useless.