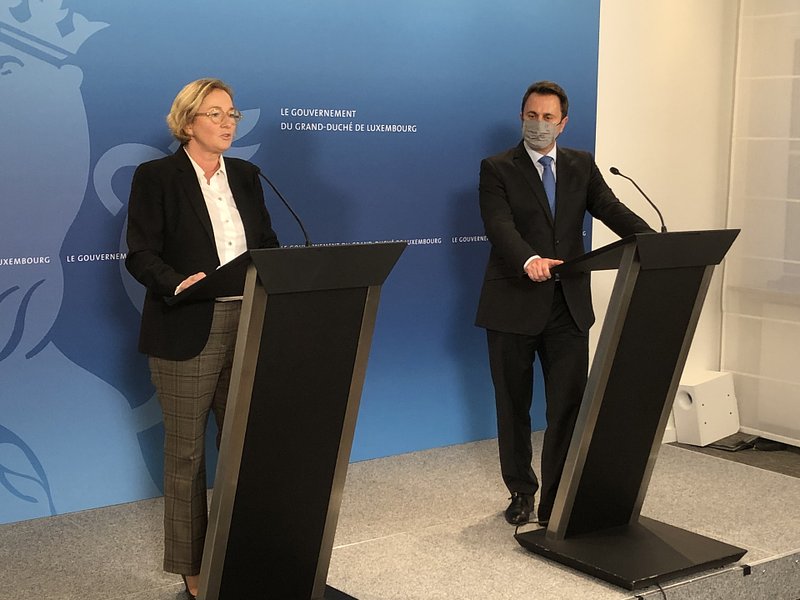 The Prime Minister Xavier Bettel and Minister of Health Paulette Lenert held a press conference on Monday afternoon to advise of the stricter measures coming into force this week.

On Monday, Bettel told the government council that current cases needed to decrease by half in order to allow for effective contact tracing. Although numbers are trending downwards, they are still too high, said the PM - new measures will therefore be introduced as of 26 December to curb the virus spread. These restrictions will be in place until 10 January.

Bettel opened the press briefing by acknowledging that the week just past saw the lowest average daily infection numbers in two months, while the positivity rate of 3.35% is the lowest since mid-October. Still, an average of around 400 cases day is too high, and Bettel noted that this does not allow for effective contact tracing - which is crucial in keeping the pandemic under control. The PM also noted that it is winter flu season, which may have a negative impact on the situation.

In all, it seems the government has adhered to the warning issued by the association of doctors and dentists, who have urged that further measures be taken.

Xavier Bettel was quick to highlight that the measures do not meet his definition of a "hard lockdown", as certain services will remain open. Minister of Health Paulette Lenert also emphasised that visits to shops and spaces where other people are should be kept to a minimum, so as to minimise any risk of contracting the virus. The PM, meanwhile, urged people to work from home wherever possible, and minimise staff in offices to those whose functions cannot be carried out remotely.

The parliamentary health committee will meet on Tuesday to discuss the new measures, while the vote in the Chamber will take place on Thursday, Christmas Eve.

Where infections are coming from

The Minister of Health noted that the lower numbers seen recently are testament to people following the rules, but also stressed that infections continue to spread through friends and family. Lenert also mentioned a French study called Contact Covid, with 30,000 participants.

This study showed how people's behaviour can affect the virus and its spread. 65% of these people could identify where they were infected with the virus. Lenert highlighted that the study showed a majority of people contracted the virus among family and friends. A large number of new cases were identified after people ate together as well.  46% of the participants said they were not wearing masks in the situation where they contracted the virus, while 43% said they had not observed social distancing at the time of infection.

Lenert thus noted that "any contact is a risk," and appealed for people to stick to the rules on receiving guests at home. She noted that the rule is designed to prevent single-person households having to spend Christmas alone, but added that rules should be not be taken advantage of.

Catch up with the livestream with live ticker translations in English here.