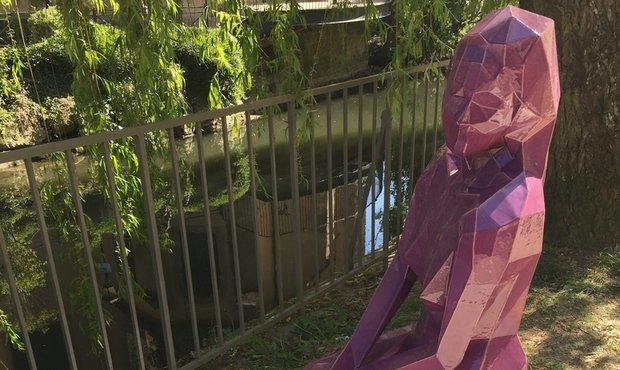 Just about everything you didn't realise you wanted to know about a fish-woman.

What is it?
A mermaid, a sculpture, a legend, a bench, and a nightclub - all rolled into one.

Why should I know about it?
The legend of Melusina is a classic in Luxembourg, and something with which all locals are more than familiar. It's an interesting piece of Luxembourg's history, and the sculpture which it inspired provides a pretty decent seat overlooking the Alzette.

Sounds wild.. how exactly does this relate to clubbing?
Fair question, and the answer is, I guess, 'indirectly'. Melusina has lent her name to one of Luxembourg's most well-known nightclubs/restaurants/venues. You'll find it in Clausen, where it's been providing the youth of Luxembourg with entertainment for around 30 years. But that's enough free advertising! This article is about a fish-woman, not party venues.

Alright, tell me more
According to legend, Siegfried - the count of Luxembourg - was was out hunting near the Bockfiels when he heard a beautiful singing voice somewhere over the horizon. As he drew closer he saw that the source of the song was an equally beautiful woman. As these things tend to go, Siegfried was instantly smitten and simply had to marry her, and she didn't seem to mind the idea. However, she did have one condition - she must be allowed absolute privacy once a week so that she could bathe undisturbed. Personal hygiene, you know? Anyway, Siegfried was more than happy to accept this minor inconvenience, but his buddies found it a bit odd. Siegfried eventually succumbed to peer pressure and decided to have have a little peek to see what his wife got up to during her weekly alone time, at which point he saw that she had a fishtail.

Unfortunately for Siegfried he wasn't quite as stealthy as he thought, and Melusina spotted his peeping little eyes as he spied on her. This betrayal led her to jump out of the castle in which they lived into the Alzette below, where she disappeared. Today she's a sculpture.

Did this really happen?
Probably not - evidence of fishpeople actually existing is limited.

Anything else I should know?
The sculpture mentioned above can be found at 13 rue Plaetis in Luxembourg city. It was designed by Luxembourgish artist Serge Ecker, who modeled it on a PC and produced it using a 3D printer. It's an example of functional art, and also serves as a bench. Worth a visit.