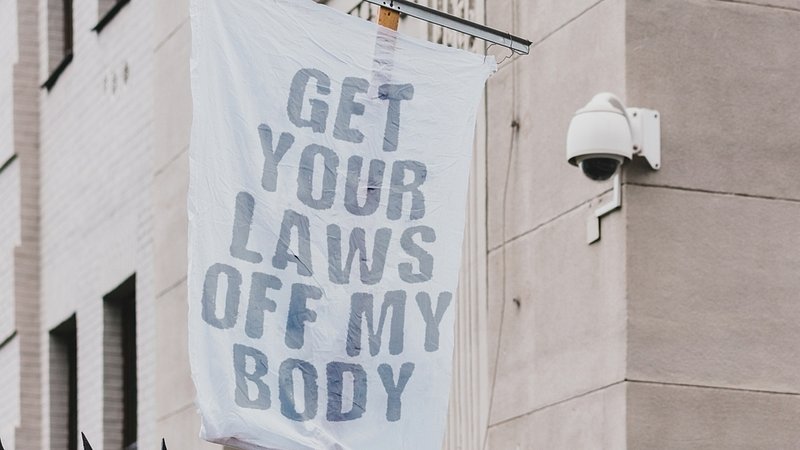 Whether it's abortion or trans rights: Time and time again, people are forced to defend their basic human rights. It is high time to draw a line and make it clear that not everything is up for debate.

I always admired people who are able to argue well. Back when I was in secondary school, we had a philosophy teacher who was able to do this. During debates, he never raised his voice and never "attacked" anyone directly. Instead, he used his intellect and superb analytical thinking to 1) make his own points in a clear and structured way and 2) point out fallacies and weaknesses in his opponents' arguments – and he did all of that in a reassuringly calm and friendly tone of voice.

He taught us students this way of arguing as well, encouraging us to remain critical, especially when it came to our own convictions. He recommended us books such as Do they think you're stupid? Or The pig that wants to be eaten, both by the English philosopher Julian Baggini.

But there is another aspect to his way of arguing (and teaching) that I find myself thinking back to more and more recently: kindness. Back then, I was still Catholic and whenever we discussed religion or God in a critical way, he always came to my desk at the end of the class to ask me how I was feeling and if the discussion had made me uncomfortable in any way. Now, I was never so religious that there would have even been the slightest chance of this happening, but the mere fact that he always took the time to check in left a lasting impression on me.

If I am telling you all of this, it's because I want to illustrate the difference between this way of arguing and the hellscape that is a majority of public debates at the moment. In fact, a large part of it is not even a "debate" at all anymore. It's hordes of online trolls spewing vitriol and hatred in a nihilistic yearning to inflict hurt, pain, and suffering.

But I actually don't want to talk about hate speech today. I want to talk about a side that is much more subtle in the way it lives out its hatred. These are people who, on the surface, might appear like my old philosophy teacher at first: They are often soft-spoken, educated, and insist time and time again that they are "just here to have a calm and rational debate".

But whenever they speak, the differences start to show. There is no gentleness in their voice, no curiosity about the world. Their "arguments" are in reality their own spiteful ideology wrapped in fancy vocabulary and pseudo-academic make-belief. They have weaponised speech, and they take a cruel, sadistic pleasure in using a wide variety of manipulation tactics to "win" debates.

Too often, the public and the media let themselves be fooled by these deliberately misleading appearances. With the result that these people often get to decide what is apparently up for debate. And if you've followed the news recently, you might have noticed just how much they think can just be argued out of existence.

The final uprising of a crumbling patriarchy

I want to cite two specific examples of what I consider to be "non-debates": abortion rights and trans rights.

My colleague Alannah has already written an excellent op-ed about the decision by the US Supreme Court to overturn Roe v. Wade, so I won't go into too much detail here. But what I would like to add as a white cis man is just how disgusted I am by the things people who look like me say in the context of this debate. I am nothing short of repulsed by all these old white men on podiums, wagging their hypocritical fingers while they share their creepy power fantasies over other people's bodies.

Nobody thinks that the decision to have an abortion is trivial or ethically unproblematic. Of course it is. But precisely because it is such an intimate and personal decision, nobody except for the pregnant person themselves should have a say in this. Not to mention the trauma brought about by forcing someone to give birth. "Pro-life" they call themselves. Forget it, they don't get to pick a cute little label for themselves. They are pro-forced-birth, and they should at least have the guts to refer to themselves this way.

The "debate" about trans rights is similarly absurd. Too often, the news makes it seem as if this is a "this side vs that side" situation. But have we ever stopped to truly consider what the two "sides" are saying?

Trans people want access to the healthcare they need, bodily autonomy, and simply the basic right to live life as the person that they are. Again, as with access to abortion, we are talking about a group of people who are simply asking society not to force them to go through unimaginable trauma – by allowing them to take personal decisions about their own lives that ultimately affect them and them alone.

Transphobes, on the other hand, want nothing less than the eradication of trans people. This might sound extreme, but some barely try to hide this fact. And even statements such as "everyone can do what they want BUT…", which might appear "moderate" to some, are almost always based on the argument that trans people don't really exist.

Manipulation tactics are very prominent in this debate as well, from conspiracy theories (an "LGBTQIA+ agenda" that is trying to "influence our children") to an obsessive focus on non-issues (the ridiculous "bathroom debate"), and an almost religious veneration of biological sex, which is often presented in a pseudo-scientific jargon.

Because of false balance tendencies in various media outlets, what happens is that trans people and others who still live in a sane world find themselves forced to "counter" these absurd talking points again and again.

No, there is no LGBTQIA+ agenda to abuse little children (there might be some confusion with the Catholic church here).

No, self-ID laws will not lead to a sudden spike in bathroom assaults – men willing to go this far will not be stopped by a sign on a door and statistically, trans people are actually at an increased risk of experiencing abuse themselves. Trans people are not the cause of violence against women, cis men are. If you want to know more about this, I can recommend this very well-researched article by Charlotte Jones and Jen Slater in The Sociological Review.

And no, the trans experience is not "against science" or "trying to abolish scientific facts like biological sex". To cite an essay written by Professor Sarah Richardson for the Los Angeles Review of Books: "Decades of research across scientific disciplines have built an understanding of human sex as a multidimensional trait with biological and social components that can vary over the life course."

But this is exactly the problem. We are trying to reason with people who cannot, and do not want to, be reasoned with.

It is time that we stop playing by the rules laid down by these radical pseudo-intellectuals. Not everything is up for debate – especially not basic human rights.