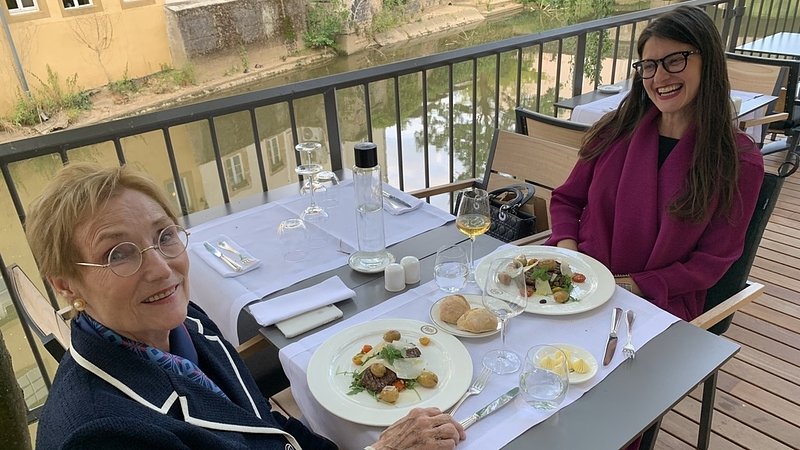 In the last eight articles we looked already at twenty-five pieces of advice which are worthy of your attention if you wish to enhance your visibility and be appointed to leadership positions.

Last week we looked at how important it is to Practice leadership, to Grasp opportunities, to Work hard & Push yourself and to find a Balance between personal and professional life, as well as to Get involved and take initiative.

My recommendations are distilled from my own experiences as well as from the suggestions received from the women that I have interviewed for my books. These are successful women in leadership positions in different fields of activity from Luxembourg and the Greater Region.

This week we will continue with the last five and I trust they are worthy of your attention if you wish to enhance your visibility and be appointed to leadership positions. As mentioned already, some advice will resonate more with you and some less. It is however important to note that while writing these pieces of advice I thought specifically about our challenges as women, our needs and leadership experiences, all the time taking into account the stories that I had heard during these last fifteen years. In addition, I believe that most (if not all) of this advice applies to men, too.

26.  Learn to effectively manage your working time. We are all different and each of us needs to find our own personalised strategies for managing our time and priorities. What works for you is unlikely to translate into a successful solution for others. Learn to organise your own time and focus on your priorities. If you are not yet in a leadership position, your mission is to help your superior be efficient and focus on his priorities. Women are generally very proud about their multitasking abilities compared to men, who would rather focus on one thing at a time.

However fantastic multitasking is, there is a downside to it: you are not focusing your attention on what you are doing but rather dividing your attention between several tasks at the same time; which often means that you will switch from writing a report to checking e-mails, calling a client, speaking to a colleague who comes to consult you on an urgent issue, when at the same time your mobile rings and suddenly you have two calls at once... and of course, everything is “urgent”. How many of you recognise yourself in the above description? I surely do and sometimes feel that my days fly by without me doing anything important. Typically, I am able to solve urgent issues with clients and co-workers but I remember many days when I didn’t have time to really work on my personal priorities. We often get stuck in the operational side of business, where no matter how many hours you work, there will always be something else which needs to be done. If you are confronted with a similar scenario, then you too need to optimise your workload and develop the necessary habits to help you perform better.

Ingvar Kamprad, the founder of IKEA, used to divide his day into ten-minute sections. He said “Ten minutes, once gone, are gone for good. Divide your life into ten-minute units, and don’t waste even a minute”. My suggestion is to check www.lifehacker.com for a diversity of time management tools that you can try out to better manage your time. The ideal is to choose the method that suits you best and not change too often once it works.

There are many different powerful techniques to effectively manage your time and some will work better for you than others. I am personally a fan of a very simple technique which helps me enormously in my day-to-day life. Every evening, I write down a ‘to-do’ list of tasks which need to be done the following day, and also some longer-term objectives to keep me focused on what is important in the weeks ahead.  This simple exercise helps me visualise my short-term and long-term tasks and goals, and also motivates and energises me.  The next day I underline the tasks completed, which helps me see how I am progressing towards fulfilling my objectives. Additionally, I decided against getting an internet connection at home, as I knew that access to my emails would divert me away from other priorities. Even though my mobile phone is always switched on for urgent matters, I rarely check it when I spend time with my loved ones.

Time management is also crucial when managing others.  Most of us have had the experience, especially when first starting to manage a team or organisation, of being challenged by the learning process of empowering your team members to work on their own problems, rather than passing these problems to you to resolve.  When we get caught up in this cycle, we are ultimately completing other people’s to-do list rather than working on our own priorities.

The “monkey-on-the-back” metaphor needs to be understood here because it directly influences the way you manage your self-imposed time. It is also essential to be able to empower your employees and team members and show them how to deal with their problems, instead of asking you to solve their problems for them. In this context, Stephen R. Covey points out in “The 8th Habit. From Effectiveness to Greatness” that you need to be sure they have the desire and the ability to solve the problems they are facing. “Empowerment often means you have to develop people, which is essentially much more time consuming than solving the problem on your own.” He also mentions that executives admit that “half or more of their time is spent on matters that are urgent, but not important” (see also next point about feedback & teams).

It’s also important to get to know and respect your physiological rhythm when managing the limited hours available, as your body doesn’t work the same way throughout the whole day. To be more effective, you have to know when to rest and when to push yourself, and it helps to give yourself rules.

27.  Care about your team. A leader is always naturally building teams and tries to have the best people around him or her. Whether you lead a team or work as part of a team, it is important to be efficient. Which means you need to observe the other team members, understand and learn who they are, what their strengths and values are, and how they might perform better. This is especially true for a boss whose results depend on the performance of each member of the team.

The team members in turn will require help to become more efficient by adapting themselves to their manager’s style and way of doing things. If you are in a position to recruit your own team members, surround yourself with the best and invest as much time as necessary to recruit the right people. Work with other people, learn to delegate, don’t try to do everything by yourself and share your success with your team(s). Trust, mutual respect and understanding should be part of a team’s values. People who generate negative energy or those you suspect of manipulating you for their own interests should be avoided. These people take all shapes and forms, and could be colleagues, so-called friends or a boss who treats you inappropriately and wishes to block you from promotion so that he/she can take the credit for your work.

Remember: No one can make you feel inferior without your permission. (Eleanor Roosevelt).

Ask for and give frequent feedback. Knowing how you are performing in your job and if you are meeting your superior’s expectations is essential to building your career. At the same time, if you are leading a team or department, it is important to give specific, clear, useful and constructive feedback to your direct reports.  Don't wait until the end of year appraisals to inform them about what they are not doing properly. Women might usually be less confrontational and more focused on consensus and the harmony of the group, but giving candid and useful positive or negative feedback will allow you to build trust in the relationships with your team members and provide them the opportunity to concentrate on improving their performances before it’s too late. If your superior does not give you feedback, then you need to turn to your peers, team members and eventually to your mentor.

Numerous managers find it difficult to admit that they can’t master a certain topic and, instead of recognising this, use techniques to hide their weaknesses. Good leaders have the courage to openly recognise what they are not strong at, and are not afraid to lose face, power or control by admitting it. Instead, they surround themselves with competent people to fill those gaps, get them involved and show them how important they are for the success of the team and the company.

Be genuinely interested in your team members and their career and personal development. Encourage them, help them make progress, develop their skills, improve their lives and assist them in finding a good balance between professional life and family life - just as you should do for yourself. The business environment has started to take into consideration more and more the well-being of employees. True leaders do it naturally because they know that their success depends on the people they work closely with. To expand your influence means helping others around you to find their own path in life, to get to know themselves, to improve their strengths and talents, and ultimately “to find their voice”, as Stephen R. Covey states.

If you were to contribute to this discussion, what would be the one piece of advice that you would like to share with our readers? Does it come from your own experience or is it based on other people’s experiences or your readings?