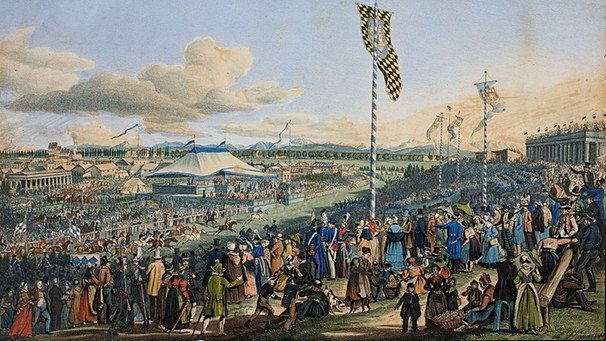 “O’ zapft is”, the prominent Bavarian phrase, once again marked the opening ceremony of this year’s Oktoberfest, as it has done from 1950 onwards. Dirndls, Lederhosen, Bratwürste, pretzels and lots of beer are the iconic traditions we think of when hearing about the festival, but what about its origins? (Keep reading and dive into the history of the festivities starting as early as 1810!)

What locals still refer to as Wies’n originates from the festivities held by King Ludwig I of Bavaria to celebrate his marriage with Princess Teresa (of Sassonia-Hildburghausen) in October 1810. Outside of the royal residence, citizens of Munich gathered on fields to celebrate the wedding with horse races and spectacles. The fields on which this took place were later named Theresienwiese, after the Princess.

The following year, the horse races were repeated to commemorate the royal wedding, (giving rise to) the early tradition of the Oktoberfest.

With the exception of 24 occasions (due to epidemics or wars, i.e. the 1854 Cholera Epidemic or the Napoleonic Wars), the fest grew larger by each year. Agricultural events were added to promote the local economy, and in 1818, the first rides were constructed. Until then, the event had been organised by authorities of Bavaria, but from 1819, the citizens took over to organise an annual event of which its duration was extended, but also moved to the warmer month of September.

By the 1890s, the Einzug der Wiesnwirte und Brauereien (the parade of brewers and staff) marked the opening ceremony and is still held today. Serving local beer in Maßkrüge (beer jugs) became the norm, and the old sheds had been replaced and by larger beer halls.

By the 20th century, citizens from all over Germany gathered to Munich to celebrate the festival. On its 100th anniversary, the organisers claimed 120,000 litres of beer were consumed!

World War I and the following years saw a temporary halt to the Oktoberfest until 1925, but it would undergo some important changes to the political significance of the event. The Nazi government took advantage of the strong sense of patriotism at the Oktoberfest and incorporated it into its propaganda strategies. Swastikas replaced the Bavarian colours, Jews were banned from working at the festival, and the slogans tried to reflect the government’s idea of overcoming social differences.

The regime also popularised the Dirndl and Lederhosen traditions, of which the memory lingered for many years and resulted in a decrease of traditional dress.

Similarly to World War I, the Oktoberfest did not take place during World War II, and was replaced by a smaller autumn festival from 1946 to 1948.

The second half of the 20th century introduced some new traditions, such as the tapping of the first beer keg by the mayor (accompanied by the slogan “O’zapft is!”, Bavarian for “It’s tapped!”) and “Gay Days” from the ‘70s onwards.

The beer halls and fairs that make up the world’s largest Volkfest still are vibrant with traditions and customs dating back to the 19th century. For its 200th anniversary, a horse race was organised and traditional Oktoberfest brewed beer was served to let visitors enjoy a walk down memory lane and explore the very roots of this event.

To give you an idea of how big this festival really is: In 2018 alone, over 6.2 million people visited, and approximately 7,570,000 litres of beer were sold!

For those who can’t make it to Munich in time for the authentic event, no need to worry: the Oktoberfest has made its way across the world! German emigrants have inspired the celebration worldwide, including the US, China, Canada, Brazil and Japan (!), just to name a few.

Luxembourgers, too, celebrate the Oktoberfest annually and enjoy some cheesy Schlager music, traditional foods and drinks. Although the number of events are decreasing and the duration is much shorter, they still boast a fun atmosphere and are worth visiting at least once!

The most notorious fest is the Hesper Dirndl Hüttenfest (26 – 29 September), but other themed events will be held in Remich (28 September), Ettelbruck (11 October), and Bertrange (12 October). 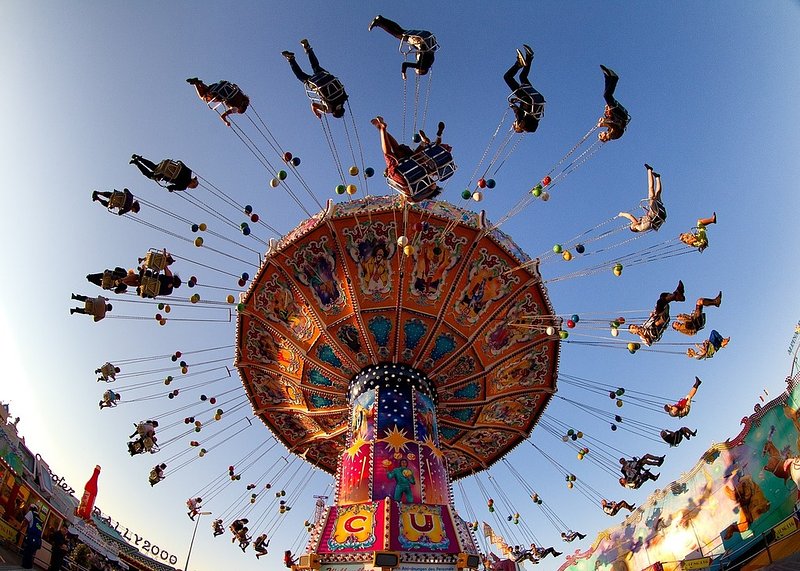