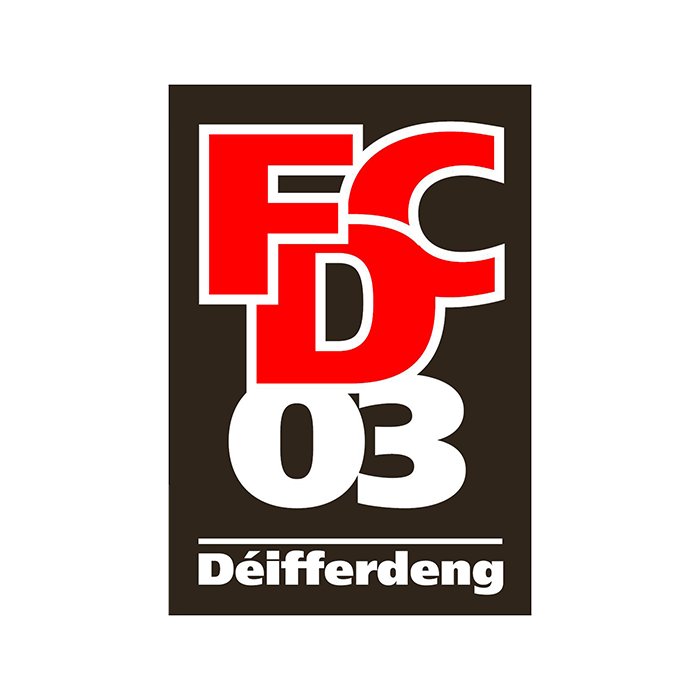 Our football profiles series continues with the story of this intern's temporary hometown club, Differdange 03.

Today we visit the southwest yet again to cover the premier club of Luxembourg's third-largest city, FC Differdange 03.

FC Differdange 03 was formed in 2003 as a result of a merger between local clubs Red Boys Differdange and AS Differdange. Red Boys (founded 1907) were the far more successful of the two clubs, having won six National Division titles and a record 15 Coupe du Luxembourg trophies. The club was especially dominant in the early days of Luxembourgish football, winning a large majority of their honours in the 1920s and 1930s. They had fallen on hard times by 2003 however, as at the time of the merger they had just finished in the bottom half of the second-tier Division of Honour.

AS Differdange (founded 1922) were a much smaller club historically, as their biggest achievement was reaching the Coupe du Luxembourg final in 1990. They were a third-tier side before the merger, but essentially got promoted as the new club took the place of Red Boys in the second tier.

After taking two seasons to find their feet as a merged club, Differdange 03 were promoted to the National Division in the 2005-06 season after finishing as champions of the Division of Honour. Upon promotion the club immediately finished 3rd in the league and earned a European berth, something they have managed to consistently attain since. Differdange 03 have never finished lower than 7th in the National Division and have attained runner-up finishes in the league three times, but they have never quite managed to win the title. The club came extremely close to winning it in the 2016-17 season, but even after a campaign where they won 20 games out of 26 and only lost once, they finished even on 65 points with F91 Dudelange but behind them on goal difference.

Differdange 03 have at least continued Red Boys' tradition of winning the Coupe du Luxembourg, as they have captured the trophy on four occasions since the merger in 2010, 2011, 2014, and 2015.

When combining their trophy case with that of Red Boys, Differdange 03 can lay claim to six National Division titles and 19 Coupe du Luxembourg victories, thus making them one of the most successful teams in Luxembourgish football history.

Both Red Boys and Differdange 03 have had numerous appearances in European competitions. Red Boys generally became the whipping boys in Europe, but they did beat Cypriot side Omonia Nicosia in the first leg of a 1979 European Cup qualification tie before losing 6-1 in the second leg and famously held a 0-0 draw with Dutch giants Ajax in 1984 UEFA Cup qualifying before being completely destroyed 14-0 in the second leg.

Since the merger Differdange 03 have fared better in Europe than Red Boys, as they have won five different two-legged ties, with the most impressive of those being a 5-4 aggregate win over Dutch side FC Utrecht in the 2013-14 UEFA Europa League second qualifying round. The club even matched up against Paris Saint-Germain in the 2011-12 Europa League playoff after their previous opponents beat them but were disqualified for a match-fixing scandal. Had they managed a shock victory, Differdange would have become the first Luxembourgish club to reach the group stage of a European competition, but PSG easily won 6-0 on aggregate.

Differdange 03 play at the Stade Municipal in the Oberkorn neighbourhood of Differdange. Located right near the train tracks, the stadium has an imposing main stand with colourful seats and a small set of bleachers on the other side of the pitch for the "Ultras", whose powers of intimidation may be hampered by their small membership. The stadium is a recent construction having been opened in 2012, and can hold 3,500 spectators. It was initially being considered as a replacement for the Stade Josy Barthel as Luxembourg's new national stadium, but this was scrapped in favour of the Stade de Luxembourg that was completed last year in Gasperich.

Differdange 03 have had another strong season that has put them in contention for a European place heading into the last few weeks of the season, but they are no closer to that elusive first title since the merger that they crave. The club's form has been solid all season long, but disappointing losses to bottom-half sides Wiltz and Hostert as well as a lower number of draws than losses has kept them from competing at the very top of the table. A win against rivals Progrès Niederkorn on Sunday will secure European football for next season, so Differdange will have to show up on their best form for the derby to hold off the challenge of 4th-placed Swift Hesperange.

Differdange have had the benefit of employing two high-scoring players this season. Portuguese striker Bertino Cabral has scored all 19 of his goals this season in the league to put him in a tie for second in the National Division scoring charts, while German striker Andreas Buch has scored 16 in the league and 18 in total. 36-year-old winger Daniel da Mota, who reached a century of caps for Luxembourg last year, joined the club in the summer and has played in nearly every game this season, scoring one goal.