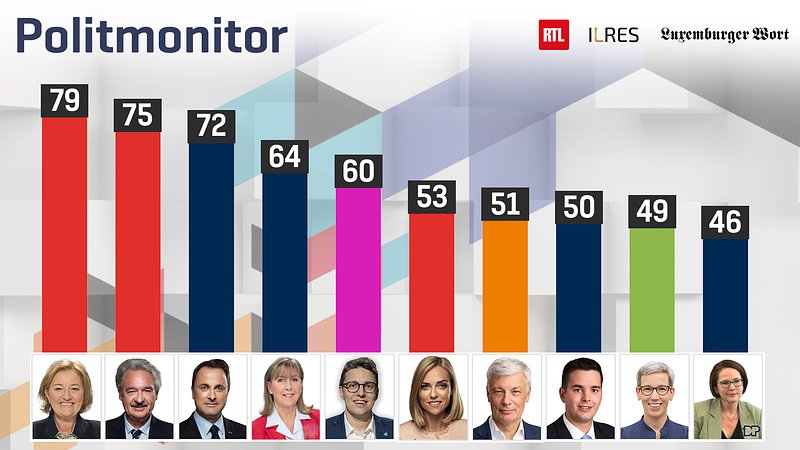 The third and last Politmonitor survey focuses on politicians and their approval ratings, with the LSAP dropping more points than any other party.

Although LSAP Minister of Health Paulette Lenert remains at the top of the rankings, six other members of her party have dropped competence and sympathy points, according to the survey results. Fellow LSAP minister Jean Asselborn nevertheless keeps hold of second place, ahead of DP Prime Minister Xavier Bettel.

Minister of Tourism and Small to Medium Businesses, Lex Delles of the Democratic Party, has dropped more than any other candidate in the rankings. Although Delles remains in the top 10 in eighth place, he has lost nine points since the last approval ratings were released, both for sympathy and competence. He was elected president of the DP shortly after the last survey.
Tommy Klein of Ilres speculates that Delles would have had to tackle thorny issues as party president, such as the vaccine mandate, which could have contributed to his drop in popularity.

Unsurprisingly, as far as Klein is concerned, Paulette Lenert remains in the top spot with 79 points, despite some trickier issues surfacing in recent months. "One would have to ask to what extent political debate, or criticism of an association, ultimately reaches the electorate," Klein said.

The Pirate Party's Sven Clement remains the most popular politician in opposition to the government, despite dropping to fifth position behind Luxembourg City mayor Lydie Polfer.

The CSV's Claude Wiseler, representing the largest opposition party, is the only member of his party to reach the top 10, sitting in seventh position.

New members of the government have made a good initial impression, with DP Minister of Finance Yuriko Backes improving by 5 points to 10th position.

The new Minister for the Environment, Joëlle Welfring of the Green Party, has improved her rating by six points but still lags behind almost every other politician in the survey.

For further details over the method used, and the questionnaire, check out this link or visit Alia.lu