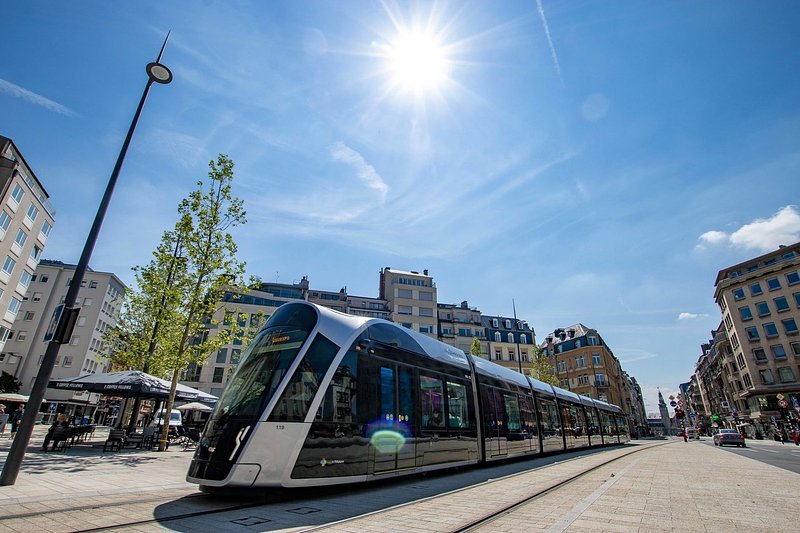 The Ministry for Mobility and Public Works has announced that there will be adaptations to the public transport routes and schedules in light of National Day.

Most of the changes will affect public transport on Wednesday 22 June, National Day Eve.

Additional shuttle buses will connect P+R locations with the Luxembourg City centre between 6pm and 10.30pm. These include the car parks in Bouillon, Howald, Kockelscheuer, and at the Stade de Luxembourg.

Due to the fireworks, the tram will not operate between the Hamilius and Gare stops from 7pm to 12.20am.

For a detailed overview of all changes, please consult the below summary provided by Mobilitéit.lu.

Overview of route and schedule changes

In the context of the National Holiday and the associated events, public transport will undergo changes in its routes and timetable. In addition, the public transport offer will be reinforced: on 22 June, the eve of the bank holidays, special services will be put in place to ensure that night owls can travel in complete safety. Please find below the details by operator:

National Day – 23 June 2022: On National Day, the RGTR routes will operate according to the public holiday timetable on the usual routes.

The special RGTR-timetables are available under this link.

Eve of the National Day – 22 June 2022: From about 18:00 onwards, due to the blocking of the connection between the station area and the city centre (Viaduct and Adolphe Bridge), all AVL lines will be diverted between the Central Station and the city centre in both directions via Rue de Hollerich and Route d'Esch. Some stops will be removed. In the early evening, before the events, the timetable of some lines (notably 2, 3, 9, 10, 11, 14 and 30) will be reinforced, notably by the introduction of additional runs. With the exception of routes 6, 16 and 18, bus services will be suspended between approximately 10.30 pm and 11.30 pm. After the fireworks, there will be special services on most AVL lines from the city centre between 11.30 pm and around 3.30 am.

The City of Luxembourg recommends that visitors travelling by car take advantage of the following park-and-ride facilities, where buses will leave every 5 to 10 minutes between approximately 18:00 and 22:30:

Departures from the city centre to the car parks will take place after the fireworks from the following stops:

The last departure for each of these lines will be at 3.30 am.

National Day – 23 June 2022: On the National Day, the AVL lines will run according to the public holiday timetable on the usual routes, except between approximately 3pm and 5.30pm, during which time all lines running between the station area and the city centre will be diverted in both directions via Rue de Hollerich and Route d'Esch. Some stops will be removed.

The City of Luxembourg provides the following means of obtaining more information:

The special AVL-timetables of the AVL are available under this link.

Eve of the National Day – 22 June 2022: The tram will run according to an extended timetable between the 'Luxexpo' stop and the ‘Gare Centrale’ stop with a minimum frequency of 10 minutes:

Please note that due to the fireworks display on the Adolphe bridge and its preparations, tram traffic will be suspended from 19:00 to 00:20 on the section 'Hamilius' – 'Gare Centrale'. A replacement bus service (line 39) will operate between the stops 'Hamilius' and 'Gare Centrale'.

National Day – 23 June 2022 : On National Day, the tram will run according to the public holiday schedule. During the military parade in the Avenue de la Liberté, tram traffic will be suspended on the 'Hamilius' – 'Gare Centrale' section between approximately 11:00 and 13:15, and the tram will only run on the 'Luxexpo' – 'Hamilius' section and back. A substitute bus service (lines 4, 13, 18 and 39) will provide the link between the 'Hamilius' and 'Gare Centrale' stops. In addition, tram traffic will be suspended on the 'Place de Metz' – 'Gare Centrale' section between 22:20 and 00:05 due to the dismantling of the official stand. A substitute bus service (lines 4, 13, 18) will be provided.

The special tram timetable is available under this link.

National Day – 23 June 2022: On National Day, CTBT routes will operate according to the public holiday timetable on the usual routes.

The special TICE-timetables are available under this link.

National Day – 23 June 2022: On National Day, CFL trains will run according to the public holiday timetable.

The special CFL-timetables are available under this link.

The special night bus timetables are available under this link.

National Holiday Eve – 22 June 2022 : The transport service for people with reduced mobility will exceptionally run until midnight on 22 June 2022.

For further questions, the mobility advisors of the "Mobiliteit.lu" call centre are available to travellers on 2465 2465 from Monday to Friday between 7 a.m. and 7 p.m. and on Saturdays, Sundays and public holidays between 9 a.m. and 4.30 p.m.