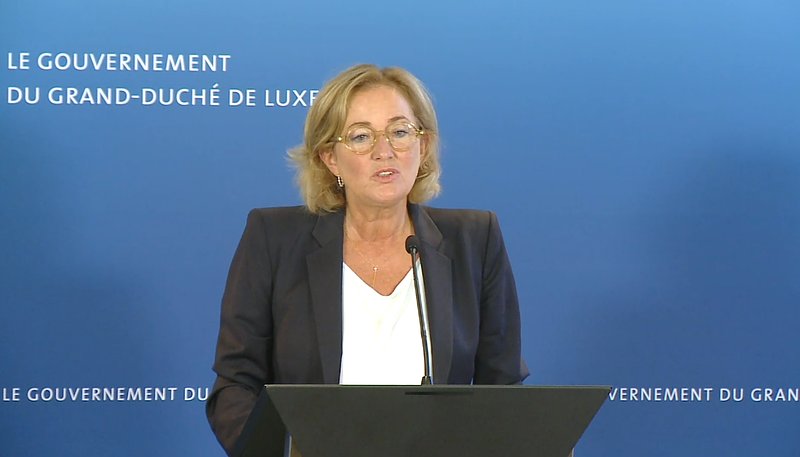 Minister of Health Paulette Lenert offered an update to the country's Covid situation on Wednesday morning and provided details on the vaccine rollout forecast for the next few months.

The situation in Luxembourg has stabilised, said Paulette Lenert on Wednesday. Hospital admissions have dropped this week, with 22 people in hospital at present - six of whom are in intensive care. 76.6% of people testing positive for the virus this week are unvaccinated, although this number has dropped compared to around 83% last week.

There have been very few fully vaccinated patients in hospital, with just two people receiving treatment after having had both doses of the jab.

Elsewhere, the vaccine uptake is climbing steadily. 72.4% of residents have now received at least one dose, while 67.5% (373,667 people at last count) are now completely vaccinated.

The rollout of vaccinations to GP surgeries has proved successful since its inauguration in early August. 13 doctors have begun administering jabs, with 177 vaccinations conducted so far. Another 74 are set to offer the service this week, with 100 more doctors to follow from 16 August.

As a result, the vaccine centres will be phased out, starting with Mondorf and Ettelbruck on 17 August, Findel on 21 August, and Esch in September, while the Victor Hugo Hall will remain open with walk-in appointments available from 30 August.

Another method of encouraging residents to take up the jab is the vaccine bus, which has been visiting events across the country, offering advice, information, and, for those who are interested, the jab itself. A further twelve events are planned to take place throughout the summer, starting with den Atelier on Wednesday evening, followed by the Glacis on Thursday.

With regard to vaccinating children, or offering a potential booster shot, consultations are still ongoing. At present, there are plans to only offer third vaccine shots to extremely vulnerable, immunosuppressed patients. A consideration will be given to residents in care and retirement homes.

The Large-Scale Testing campaign will come to an end on 15 September. It will be replaced with a strategy focusing on rapid tests and serology analysis. Pupils in schools will continue to be tested regularly at least until the end of October.

There are currently no plans to implement a vaccine passport beyond the CovidCheck system, which was said to be working well with no issues reported over recent weeks.
Dr Jean-Claude Schmit of the Health Directorate offered some explanations to vaccine certificates, confirming that people who displayed antibodies in bloodwork, but had not presented a positive PCR test for the virus, would still have to get the vaccine in order to be considered fully protected. He explained this was part of the legal framework in place.

Other patients, who received a positive PCR result within the last six months, but still showed high antibody values in serology testing, would not be permitted to extend their certificate beyond the 180 days. This was decreed by a European Union directive.