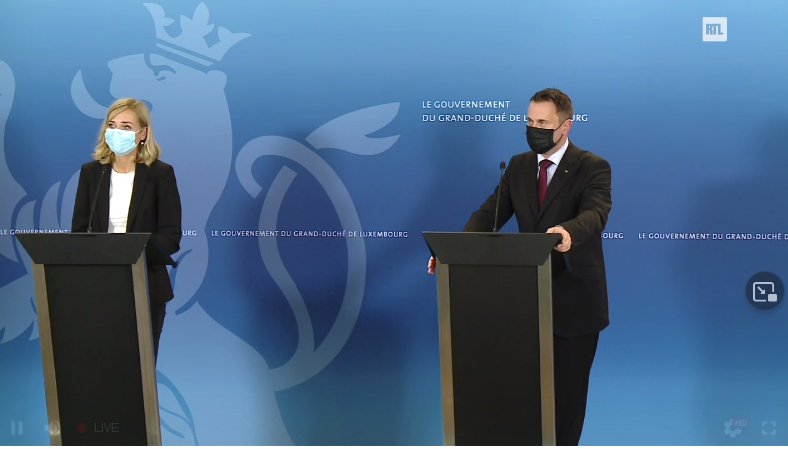 They were joined by high commissioner for national protection Luc Feller, as well as Paul Schroeder, the director of the Grand Ducal Fire and Rescue Corps (CGDIS).

The Prime Minister opened the briefing by addressing the unprecedented situation, announcing that the government will mobilise €50 million of support for affected people and businesses. He explained that his upmost priority is to evacuate people in life-threatening situations. Despite the fact that nobody died, he acknowledged that indescribable losses were still suffered over the course of the past few hours. "The government will now try to act as quickly as possible and offer uncomplicated and direct help", concluded Bettel.

Minister Bofferding spoke about the communication between affected municipalities, while commissioner Feller spoke about the efforts of the crisis management team. He confirmed that the worst should be over by now, although individual rain showers are still expected to take place over night. Water levels are currently stable and expected to fall as of tomorrow. Feller further emphasised that some of the country's water levels reached a peak not seen in over a century.

Paul Schroeder of the CGDIS explained that clearing operations will be the next big challenge, and that damages to roads and bridges need urgent assessment.

People may request aid for expenses of primary necessity, which they can do online via the Ministry for Family Affairs and Integration.

Businesses that suffered directly from the floods are eligible for financial aids to help repair material damages, infrastructural ones, as well as losses in terms of equipment and stocks.

The state council further decided that partial unemployment can be filed in cases where the floods have rendered business operations economically difficult, or impossible altogether.

The Ministry of Agriculture, Viticulture and Rural Development also decided to award aids to affected business in the sector. Details are expected to be issued over the coming days.

Affected towns can contact the Ministry for Home Affairs to receive financial support for damages.