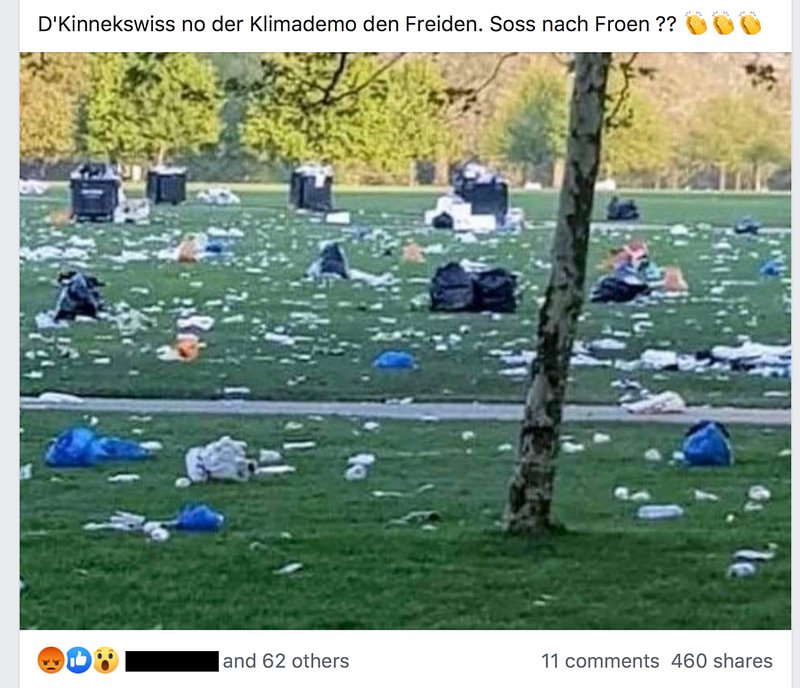 A Facebook post has been making the rounds in Luxembourg, showing an image of a park covered with litter. The post claims that this is the Kinnekswiss park, where the Fridays for Future protest ended after marching through Luxembourg.

The post has received a significant amount of traction, having been shared 143 times at the time of publishing and received a number of angry reactions. Only a couple of hours later, more than 460 people had shared the post on Facebook.

The caption "The Kinnekswiss after Friday's climate demo. Any more questions?" clearly points the blame at young people who participated in the youth strike. The post is clearly intended to denegrate environmental activists, calling them out on their hypocrisy in campaigning for better environmental policies yet leaving waste. One Facebook user commented 'Horror and hypocrisy'.

At the face of it, the image does not put activists in a good light. However, the image being circulated is actually a hoax. The park pictured in the Facebook post is Hyde Park in London. Now, climate protesters in London weren't actually the culprits. The photo is actually showing the litter left behind after a marijuana festival called 420 in London, which took place in April 2019.

The original Facebook post has been taken offline around noon on Sunday. However, due to the large number of shares, it is likely that similar posts are still circulating on social media.

Youth for Climate Luxembourg told RTL Today that they were "sad to see people going to these lengths to discredit" the initiative.

Youth for Climate Luxembourg have now publicly reacted to the accusations and posted actual pictures of the Kinnekswiss after the rally.

Hoax dating back to April

The hoax was already debunked back in April when the London Royal Parks Twitter account clarified that the mess was not related to Extinction Rebellion - climate activists who held a protest on the same day - at all.

There's a lot of incorrect information doing the Twitter rounds this morning. This photo is the result of an unofficial event in Hyde Park on Saturday, not the #ExtinctionRebellion protestors in Marble Arch.

It costs us millions to clear #litter every year. Please take it home. pic.twitter.com/F1JtAqmnVO

In fact, Extinction Rebellion activists actually stayed behind to clear up the litter after the marijuana enthusiasts left. The photo has resurfaced after the global strikes on Friday 20 September, both in Luxembourg and elsewhere. An Australian pro-coal page shared the photo, shaming activists for allegedly ruining Sydney's Hyde Park, despite no climate strike taking place in the park in Sydney.

As we can see from the image, it is not the Kinnekswiss and merely an attempt to discredit climate activists. Not everyone who saw the Facebook post was duped by it, however. One Facebook user wrote :"This hoax has been circulating on the internet for sometime and is constantly misused to discredit young people."

Incidentally, Saturday - the day the photo was posted to Facebook - was World Cleanup Day, where activists around the globe and in Luxembourg took to clearing public spaces to raise awareness of the general issue surrounding litter.

Viral misinformation doing rounds. This pic is from an event in Hyde Park, London in April unrelated to climate protests. https://t.co/Ro1fcFLcyS pic.twitter.com/G5aaKLiDzd