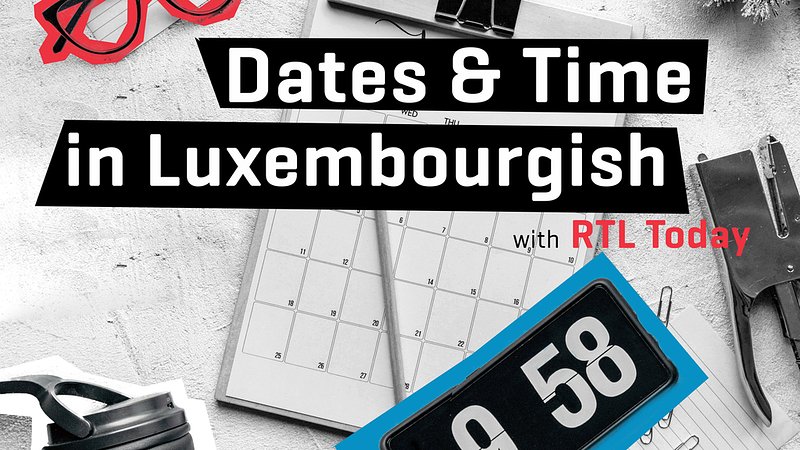 What time is it? When is your next meeting scheduled? And when is Jean-Pierre's birthday again?

In today's lesson, you'll learn all about time and dates in Luxembourgish!

Gudde Moien and welcome to another Luxembourgish lesson. Nice to have you back! In last week's lesson, we focused on directions and how we can find our way around town. So, after getting our riets, lénks, uewen, and ënnen sorted, it's only logical to move on to the other great concept that defines our experience of reality: time.

Once again, you'll find a neat vocabulary list with some general time-related words (morning, noon, today…etc) from the lesson alongside the fourth part of our more grammar-focussed article series "Language Basics" – which this time is about counting beyond 100. Once again, it is completely up to you whether you want that extra information, or whether you want to dive straight into the phrases. (MARTIN: cf end of document)

Firstly, a little bit about how Luxembourgers tell the time. While English-speaking folk use the 12-hour-clock both in spoken and in written speech, Luxembourgish makes use of both the 12-hour and 24-hour-clocks.

When talking to your friends and acquaintances, you are most likely to hear the 12-hour-clock, just as in English. However, in writing, the general standard is the 24-hour-clock, meaning that 2pm, for instance, will be written as 14 Auer. However, people will sometimes also use this clock in conversation! So, when you hear someone talking about something that happened at siechzéng (16) Auer, know that they mean 4pm.

All clear? Splendid, then let's look at some basic phrases we can use to talk about the time:

The days of the week

Overall, this should not be too difficult: Like most other countries, Luxembourgish uses the Roman names of the 12 months. Most of them are outright the same, very similar, or just slightly different from their English equivalents.

On a side note: Once upon a time, Luxembourgish did have its own, original names for the 12 months of the year. If you want to expand your trivia, be sure to check out this article for a deep dive into the old calendar!

Two of these are a breeze: Summer stays the same (just the pronunciation differs) and winter just changes a single letter!

Having learned all of that, we can now confidently ask and answer the questions from the introduction: