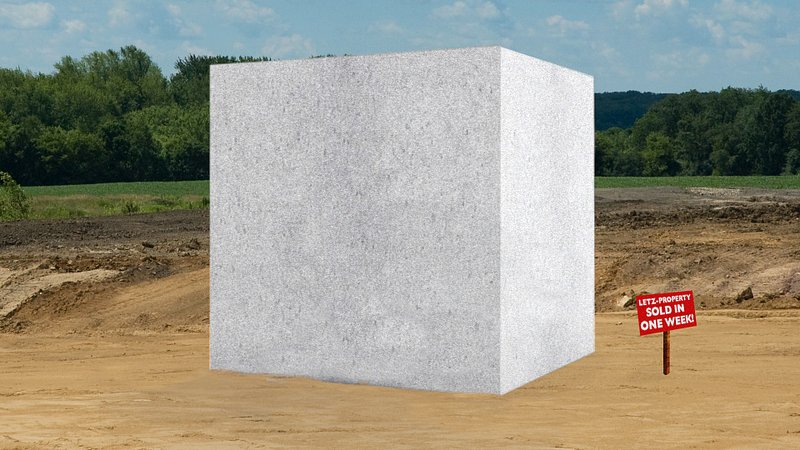 The thrill of the world’s first contact with extraterrestrial life quickly subsided on Wednesday when what was believed to be an alien pod turned out to be a new, modern house.

The windowless concrete cube, which appeared overnight in Cessange, was first spotted by a neighbor who said it didn’t look like anything she’d ever seen before.

“My son said it could be some kind of trendy residential unit, and I told him he was crazy,” the neighbor said. “Who would want to live in a box?”

Certain that the cube had come from another planet, she called SETI, the institute dedicated to searching for intelligent life beyond earth.

SETI experts set up a communication station in front of the cube, and several top linguists tried in vain to speak with the creatures believed to be inside.

“We welcome you,” said one linguist in 16 human languages and 11 artificial ones. “Would you like something to drink?”

After nearly eight hours of non-stop attempts to communicate, a previously invisible door opened, and what appeared to be a man stuck his head out.

“Go away,” he said in what one linguist identified as a Danish accent. The researchers concluded that the man was an alien that had taken human form. They approached the being to get a tissue sample to send to a lab in California.

The man, now irate, explained that the cube was indeed a human home and that the peculiar modernist design is all the rage in many world capitals including Luxembourg City.

“I paid good money to live in such an aesthetically striking structure devoid of all warmth and comfort, one that totally clashes with the surrounding homes, and I’d appreciate it if you left me alone,” he said and slammed the invisible door.

The developer behind the construction of the house says he’s surprised by all the confusion, especially as his company has already built and sold about a thousand such living cubes all over Luxembourg.