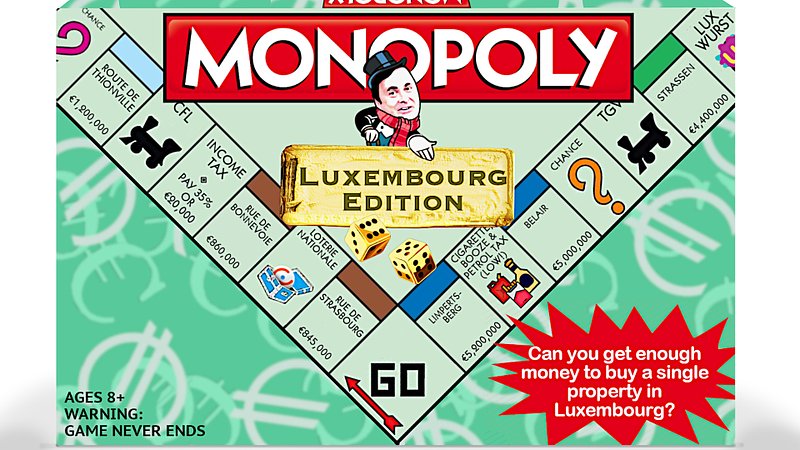 Toy manufacturer Hasbro has released a new Luxembourg edition of its popular board game Monopoly. In this version, all the properties are so expensive that no player can ever afford one, so the game technically never ends.

Daniel Munguia, who rents an apartment in Gasperich, helped to design the game. He says this edition is based wholly on his frustration of watching home prices skyrocket year after year.

“At first, this game seems just like the classic one,” Munguia said. “Players go around the board, collect €200 for passing GO, and sometimes pay money to the bank when they’re instructed to.”

“But even if through luck and cheating you manage to get all the money in the entire game, you’ll never be able to buy a single property,” he continued. “The set comes with 760,000 euros in the bank, but the cheapest property, Rue de Strasbourg, costs 845,000 euros.”

Consequently, Munguia says, players just go around the board for hours or days until someone falls asleep or goes mad from the futility of it all.

“The most expensive property is Limpertsberg, which costs 5.2 million euros,” he said. “But forget about it. It’s a dream, you hear? You’d have to get like, eight game sets to get that much money.”

The Luxembourg edition does come with the iconic little green houses and red hotels, Munguia says, but that’s only to further increase players’ misery.

“There is one funny twist about this version,” Munguia said. “When you’re sent to jail, you’re kind of happy about it. Being stuck in a cell gives you a sense of ownership, like, this is my place.” This is the second localized version of Monopoly released in the Greater Region in recent years. In 2017, Hasbro introduced Monopoly: Cross-Border Worker Edition, in which players could acquire cheap properties named after streets in Longwy, Martelange, and Konz.

However, players were required to wait ten minutes between each roll of the dice to recreate the feeling of losing precious chunks of life while being stuck in traffic.