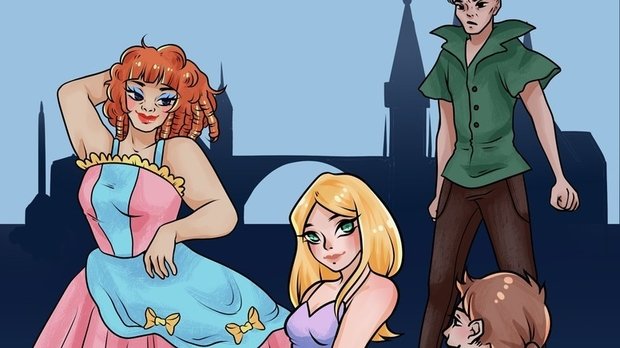 We recently had the opportunity to interview Rachel Parker about her original Pantomime that will be put on in November.

She took the time to tell us about Melusina the Pantomime, an original script, about the story of (you guessed it) Melusina.

The show, having two acts, follows the story of Melusina, a water sprite that is cursed by the Kropemann to have a tail once a week. She meets Count Sigfried, the Count of the Lorraine and they instantly fall in love. Using her magic, she builds them a mighty castle where they can live in the Ardennes. Sigfried promised that he will leave her alone once a week, however, he doesn't keep that promise for long. Including hit songs, the pantomime promises to be an evening of mystery and adventure.
What is a pantomime?

(RP) It's a tradition form of musical theatre. The idea is that it's something you can bring the whole family to, so it's created in such a way that children can enjoy it but there's also a few rude jokes, such as double entendres, for adults and the idea is that it can go over the children's heads. A lot of old traditions come from Commedia dell'arte and it took aspects of that, such as the 'baddie' character, who for example should always come from the left or speak in poetry. They combined these ideas with music and the people would their songs, which were sometimes a bit rude or funny, and it ended up evolving and became this thing that people know and love. They just come expecting to have a good laugh and enjoy the stories, which are always happy and magical. There's dancing and singing, and people just know that they can rely on it and it won't be anything serious or political.

There's also the idea that people can shout back and join in with the fun, usually with something like "He's right behind you!" or "Oh no, he isn't!". And because it's for children, the actors tell the audience what to shout so even if you haven't seen on you can still participate. For me, it's as relevant as ever because kids spend most of their time in front of televisions or computers. The idea of being in the theatre where people talk to you and react to what your're saying and interact and the magic for the kids makes them really amazing. That's why I really love pantos, its always magical and its such fun and the audience really love it.

What made you decide to write a pantomime?

For starters, I thought it was time Pirate Productions did a pantomime. It was really because I was reading up about Luxembourg legends and all these things that came up. There are so many and they are so out there and I just thought 'This belongs in a Panto' because its funny in itself. The whole thing with the Stierchen Bridge ghost that can only be seen by horses and drunk people; who on earth thinks of that? I thought 'well, that belongs in a pantomime' because its ridiculously unbelievable but its part of Luxembourg legends. In Act 2 [of the show], you have a scene where Siggy is sending people out and they say 'no there's a ghost there', those are all real legends. I did quite a lot of research on it and I thought the whole idea of Melusina would make a good pantomime story. I just happened to be reading up about it and I just felt like it should all be in a pantomime.

When did you start writing this piece?

About a year before the auditions, so last spring about. I just gathered all of the things I felt should go in there somewhere and then just sketched out a plot and started writing. I was working with Neil Johnson and once we started rehearsing he came back with some new script ideas once he knew who he was working with. I wrote a couple of draft and we've changed it a bit as we've gone along but not that much.

Why did you pick Melusina?

Its quite an important legend in Luxembourg. It has a hero and a heroine and a good love story for a pantomime, as well as peril and evil and good, rather than just a bad thing happening and that's it like other legends. Its a particularly good story for telling on a stage because of the different characters. Melusina is a really nice character in herself because she has this interesting supernatural background and curse, but she's really sweet and a child of nature.

What do you hope the audience will get from the show?

I think to have a nice night out where you can have a laugh and come away smiling. Also that all of these Luxembourg folklore's are interesting and something worth celebrating. There's a lot of interesting history and stories in Luxembourg and you can feel it when you visit these places and as foreigners we should be aware of it and respect it. It just a celebration of history and a way to have a laugh and a good evening.

The show stars RachelKathryn Lloyd and Jennie Kenton as Melusina and Count Sigfried, including Alex Teligadas as the villan Groschlecht and Frazer Alexander as the dame Josephine. It also has Patrick Taylor-Kielty as Sigfried's right hand man Jean and Mike West as Josephine's husband Jempy.

It will be staged November 7-10, with evening shows (7:30pm) on Thursday, Friday and Saturday and matinee shows (14:30pm) on Saturday and Sunday at the Kinneksbond in Mamer.