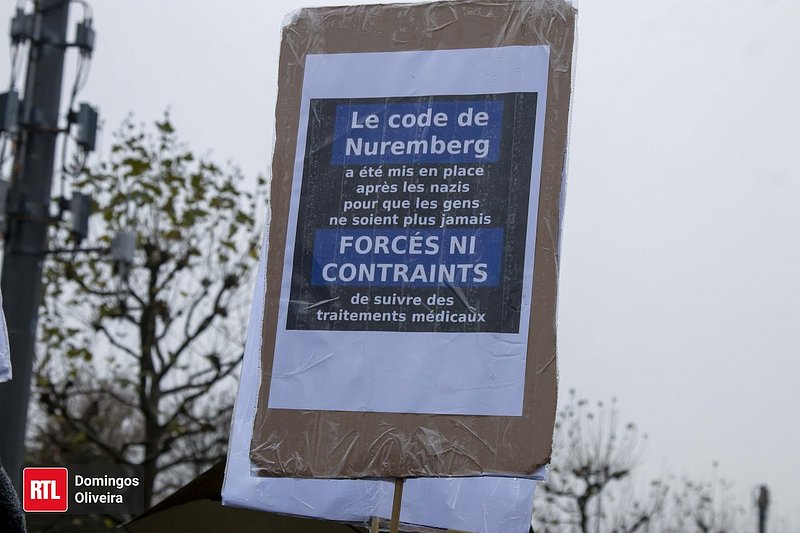 I hope I am wrong, I really do, but I suspect that the divisions we are seeing at the moment will get far worse before they get better.

Godwin's law tells us that any online discussion will eventually lead to comparisons being drawn to Hitler or Nazism. It didn't take long for this to be proven true following the announcement of new 2G approach to leisure activities in Luxembourg.

But the comparison isn't only happening on the internet - it could also be seen at Saturday's much-discussed, and politically condemned, anti-coronavirus measure demonstrations in Luxembourg City.

This wasn't the first demonstration held in Luxembourg in response to coronavirus measures, largely concerning CovidCheck, mask obligation, and vaccinations. We've seen several so-called 'white marches', for instance, though Saturday's demonstration appeared to have drawn far larger crowds than previous marches. While the police estimated that some 2,000 people had gathered initially, it was also noted that 'additional groups' had joined. We don't presently have any official estimate, but the consensus appears to be that the final count may exceed 2,000 by quite a bit.

The demonstration drew criticism on several accounts - primarily due to instances of violent behaviour in breaking barriers to enter the CovidCheck-mandatory Christmas market, as well as protesters making their way to the private residences of Bettel and Cahen, with the latter asked by police to vacate her home.

Condemnation, however, will not get us far. Yes, transgressions were made and yes, these deserve condemnation. But, then what? What's next? What can be done that will not lead to further division?

To preserve the legitimacy of its decisions, the government cannot feasibly be seen to back down. Doing so would suggest that they are at least partially uncertain about decisions made, and that a mob can change the course of national politics. While rolling back some of the current restrictions would, one would assume, appease demonstrators, it would also make it far harder for the government to introduce any other restrictions, recommendations, or vaccination appeals in the future.

Those already vaccinated and adhering to the restrictions would doubtless be less easily convinced of the necessity of doing so in the future - this would be a natural response to seeing others circumventing the rules that we thought applied to all. We're all children, to some extent, and escaping the childish thought of "well, they didn't have to do it, so why should I  have to? It's unfair!" requires more reflexivity than most us are willing to invest.

And that's just to convince those who are already in line with extant recommendations. Imagine trying, again, to convince those currently demonstrating of the necessity for further sanitary measures in the future. Sisyphus, eat your heart out.

Faced with unprecedented health - and political - challenges, the government has no choice, then, but to take unpopular decisions and stick by them. They must be seen as responding to every new development competently and confidently.

The problem is that doing so also furthers the divisions we are seeing. Cracking down on the protesters will only fuel their frustrations, and understandably so.

They feel unheard, and silencing them will only prove their point. Their position is also constantly ridiculed, but should it be? They are, after all, being asked to put a foreign substance into their bodies against their will as a prerequisite to fully participating in society. I'm vaccinated, and I'm happy with that choice, but I also understand why some are less keen. I'm not a scientist and I haven't a real clue, if I'm honest, how vaccines work, and as such I, like the vast majority of you, accepted the vaccine on faith. I do the same with paracetamol, which I also know little about beyond it generally being delivered in the form of a small, cheap, white pill.

But I did have a real choice, there was no consequence to not accepting the vaccine, which now there is. Convincing by coercion is a questionable and desperate tactic, that makes for one bitter pill to swallow. That's not to say it isn't what's needed to stop the pandemic, it may well be that it is, but that makes it no less contentious, no less questionable in its feasibility.

There seems, to me, to be little in terms of a way out.

We've been here before - unfortunately

These may seem like novel times, but they are not. We have been in a similar situation before, and it wasn't long ago. When the pandemic first reached our landlocked shores, divisions very quickly arose between those who subscribed to the health experts' views, and those who were convinced that the virus was no worse than a seasonal flu. The comments we saw on our pages then, and the debates, were very similar indeed to what we are seeing today - though both the volume and ferocity of argument seem greater this time around.

For weeks on end we saw bitter debates between the two groupings, and when the debate eventually abated it was largely due to the rapid spread of the first wave, the rise in hospitalisation, and in deaths. I hope this isn't what is needed to calm the current storms of division. In fact, I would much sooner see the demonstrators proved correct, the virus disappear gradually without further intervention, and life return to normal as suddenly as that normal was ripped from our unsuspecting hands.

An unusually large portion of our editors' days are, at the moment, devoted to checking comments on our page and social media channels. To ensure that our community rules are followed, that everyone feels safe in sharing their opinion without being personally attacked or threatened.

It is the nature of opinions that the longer one holds them, and the more they are challenged, the more vociferously one defends them. I think we've all been in an discussion where we realise that we're taking our argument further and further, eventually ending up defending a stance we barely believe ourselves, so far is it from our original starting point.

Counter-arguments, however solid, eventually become the fuel that stokes the flame of our disagreement. People have, at this point, held their opinions on the coronavirus, and associated restrictions, for nearly two years. Debates have been engaged in, or passively consumed, and on both sides of the disagreement people have read countless words supporting their own position.

To change anyone's mind at this point is tantamount to moving mountains. The escalation in tensions seen in digital discussion appears to have bled into physical demonstrations. I hope that I am wrong, and that we won't see continued or escalating protest, that we will find a middle-ground on which everyone can happily coexist while simultaneously putting an effective end to the pandemic.. but this hypothetical and precarious equilibrium state seems far from our lived reality.

I don't believe for a second that anyone, on either side of the division, is being selfish. We are all trying to do what we think is best for us and our loved ones, but we have different ideas of what that is. Constant debate, ridicule, and attack in either direction will only lead to more extreme stances.

In an ideal world there would be a forum where this could all be discussed openly, where all views could be heard, where any concern could be answered, and where perfect evidence could be presented. The truth, whatever it is, would prevail, and all would be well. Unfortunately we don't live in an ideal world.

What happens next is anyone's guess, but I fear further and deeper division will come before unity. Here's to hoping that I couldn't be more wrong.

Voices of reason on both sides of the response to the current measures - those who happily comply, and those who refuse - say that we need to show understanding for each other, live harmoniously. This may seem almost naively Utopian, but listening, trying to understand, and keeping an open mind to new information and solutions seems to me the only way forward.