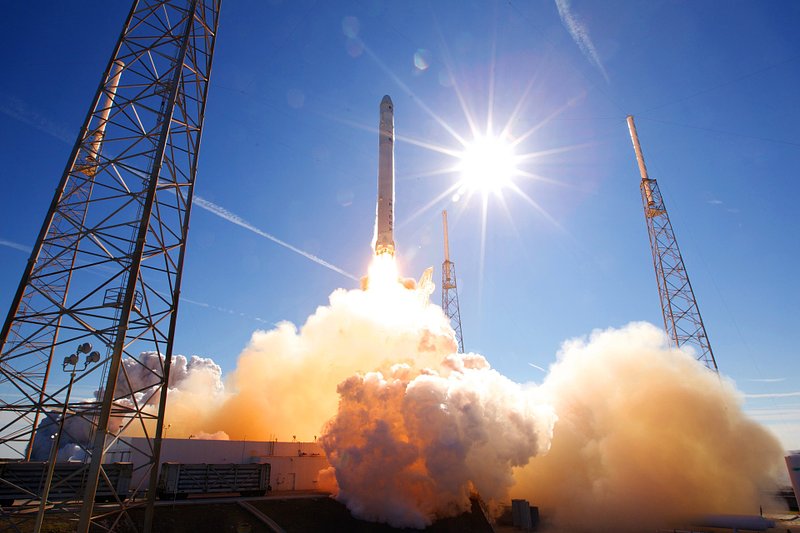 Business moguls Richard Branson and Jeff Bezos recently jetted off to space in highly televised events. I used to be fascinated by the strange world beyond the final frontier as a child. So why does it all feel so empty now?

One of my favourite things to do as a child was reading. While other children were outside climbing trees and dashing down the slopes of the local forest on their bicycles, I preferred hiding under my parents' dining table to read whatever books I could get my hands on.

Besides fiction, I was regularly entranced by children's lexica – many of the books I had were in alphabetical order and I loved reading them again and again, learning about history, science, art, religion, and philosophy. I went through many "phases" during that time, one of which was an "Egyptology" phase which led to me telling anyone and everyone who asked (or didn't ask) that I wanted to become an archaeologist and unearth the secrets buried under the Egyptian desert.

However, one day my mother gifted me a book that would change everything: "George's Secret Key to the Universe", written by Stephen Hawking and his daughter Lucy Hawking (I had the German translation since at that time I had not yet learned any English, so I actually had to look up the original title for this article). This book, an ingenious combination of a captivating story and fascinating insights into our solar system and the wider universe, absolutely mesmerised me and triggered a fascination with anything space-related that would last for many years.

Remembering this, I feel slightly at odds with myself nowadays. In some ways, space has been in the news a lot recently and when I look at some reactions on the internet, many people seem to be very excited by the recent trips of certain well-known billionaires.

However, I mostly tried to avoid these events as much as possible and when I did come across news about it, I either felt empty inside or plain furious. So, what has changed in recent years?

The interstellar quest for knowledge

Looking back today, I still clearly remember who the source of my fascination with space as a child/teenager were: Astronauts and Cosmonauts, scientists, engineers, teachers, and scientific journalists.

I devoured the stories of both Yuri Gagarin and Neil Armstrong – without really caring about the silly "space race" between their countries, I have to say. No, I was enthralled by the courage and determination of these people and the lifelong work it took them to achieve their goals. My father often told me the story about the moon landing, as it was in fact the first "event" he ever saw on television, and how truly mindboggling the idea of a human on the moon actually was at that time.

However, I was equally impressed by people doing space-related research. In fact, I was incredibly lucky to have a physics teacher in secondary school who had previously worked on actual research satellites in Toulouse. Towards the end of my secondary school career, he offered an elective class about astrophysics and despite the fact that at that point I had already focussed all of my studies on language and literature (which in Luxembourg means that you no longer have any STEM subjects on your weekly schedule), I still opted for his course – which ended up being one of the best classes I ever took in secondary school. I still remember one particular group assignment where we looked at actual, English research papers and did a presentation on the atmospheric composure of the Jupiter moon Io. That I managed to somewhat pull this off at that age, when I had already long come to terms with the fact that anything maths or science related was just not for me, is an achievement I am particularly proud of to this day and a testament to the brilliance of my former teacher.

The last time I remember feeling this deep, emotional enchantment with space was when my best friend and I went to see Christopher Nolan's film Interstellar. A splendid piece of cinema, in my opinion, and one of the films that you just have to see in a movie theatre to get the full experience. The way the film was shot combined with an ingenious sound design and a masterful soundtrack by Hans Zimmer really makes you feel as if you were travelling with the characters into the depths of the unknown. My friend and I talked for hours about it and how it reminded us of our fascination with the subject – something which had connected us since childhood.

The empty pursuit of profits and vanity

Fast-forward to today and the situation has changed quite significantly. In June, two billionaires did what I can only describe as one of the least impressive things I have ever seen. Both used their criminal wealth to dangle above the Earth for a few minutes and celebrated it as if they had just found the cure for cancer.

Richard Branson even had the gall to refer to himself as "Astronaut 001" – nothing short of a slap in the face of all the truly courageous people that actually deserve and earned this title. Bezos was in no way better, of course, as his chosen apparel of a cowboy hat of all things made one think less of an intellectually and physically skilled space traveller, and more of someone going through the most embarrassing midlife crisis in the history of fragile masculinity.

But besides these shallow displays of vanity, the whole idea behind billionaires taking over "space exploration" to me just seems empty and disappointing. I have no idea who actually gets excited about the idea of floating space hotels only accessible to the world's richest and most influential people, just as one of the most ambitious projects of all time approaches its end: The International Space Station (ISS) is another one of these space-related topics that I was enchanted by as a child. To me, it stood for international cooperation, a joint project of humanity in the name of knowledge and scientific progress – rich people sipping on Gin Tonics while looking at a planet that is being ravaged by climate change (something for which the practices of their companies are mainly responsible, lest we forget) is worse than just a downgrade – it's downright dystopian.

Having said that, it should of course also be stressed that there are still many brilliant scientists, engineers, astronomers, astrophysicists, as well as actual astronauts and cosmonauts out there. The ISS is expected to remain at least somewhat operational until the end of the decade and there are of course still projects and efforts into space exploration that are purely motivated by the pursuit of knowledge and not by the desire to turn space into the next big cash grab.

These projects and people are what keep my fascination with outer space alive. And thanks to them, I still sometimes glance at the night sky, wondering about the mysterious world that lies beyond.