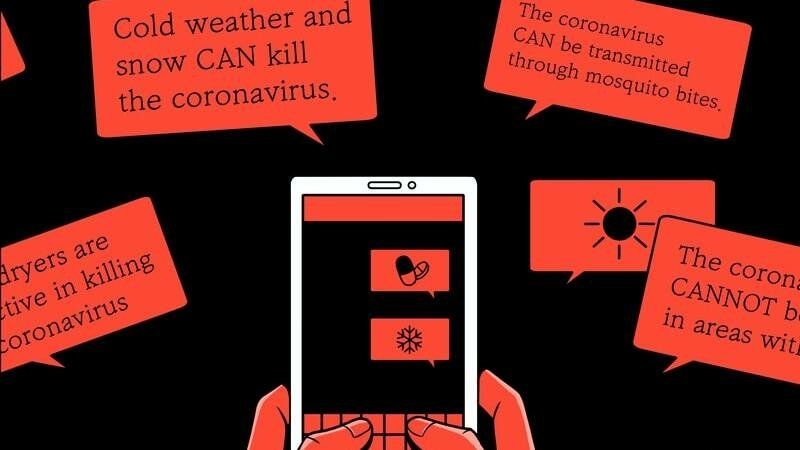 In the early days of the outbreak we saw a lot of virus-scepticism on our pages. While it went through a period of decline, the phenomenon is once again on the rise.

At the start of the year when we first began reporting on the then-budding coronavirus outbreak, we saw a lot of people questioning the veracity of reporting on Covid-19. From its actual existence and its ability to spread, to how dangerous it actually is, through to where it came from - everything about the virus was being questioned by a chunk of our readers, and people at large.

After a while, as the virus came closer to our own doorstep, this began to decrease and we saw fewer critical and questioning comments. With events being cancelled seemingly every moment, the government scrambling to prepare for the pandemic arriving in the Grand Duchy, near-daily press conferences, and employees beginning to settle in to working from home.. it seemed that the loud minority of sceptics became both smaller and quieter.

In the last several weeks I've noticed a resurgence in these critical voices on our pages. The most common arguments are largely:

Let's take a look at each of these in turn, but starting with the last.

I've seen a lot of comments - on our own social media pages, comments sections, and on those of other media outlets - saying that news outlets are 'fear mongering' by only publishing negative stories about the coronavirus. Another common argument is that we ignore scientific discoveries and publications which paint a more positive picture, or which are critical of some virus containment measures. These often also call for people to find the truth for themselves by looking at other sources of information.

As regards the last point here, let me be very clear: I am wholly and unquestionably in favour of people seeking out information from multiple sources. It's something we all need to become far better at, not just when it comes to the novel coronavirus, but in general. That said, merely finding additional information is insufficient: you must also question the veracity of the source of said information, and the validity of their argument. You must, in other words, think critically, and weigh the evidence in accordance to its source, method, and underlying data and assumptions.

We also report on the government's recommendations and the regulations they put in place in order to contain the spread of the virus, such as the need to wear face masks and limit social interactions in larger groups. This is because it is our duty to ensure that our readers know the decisions made by those in power; not because those in power tell us what to write. There's an important distinction here. For those who continue to say we never criticise the government, read this, this, this, and this for a starter.

And finally, positive coronavirus stories are not being ignored. In fact, we publish a great many of them. From a drop in the number of patients in intensive care in the Grand Duchy (yesterday it was zero), to economies bouncing back, improvements to treatment, vaccine advancements, and even little stories like Findel being recognised for its response.. we do seek out the positive side as well, all the time. Much as you don't like reading negative news day after day, I'm sure you can imagine we don't exactly love reporting on it either.

The problem is that we're in the midst of a global pandemic, which makes positive pandemic news rather more difficult to find.

This has certainly be a contentious question from the very beginning, with some arguing vociferously that masks are pointless as they do not stop the spread of the virus. It is safe to say that I, and the rest of the team, are not experts in this matter. Nor are the vast majority of critical voices. Instead, we must all rely on actual experts to make this determination - and remember what I said above about getting information from multiple sources, determining the validity of their argument, and acting accordingly.

This is precisely what we have done, and continue to do. On the question of face masks, we look for example to sources such as the CDC (Center for Disease Control) in the US, who have collated information on the usefulness of face masks. While they constitute a reliable source in their own right, they have also published a list of recent studies upon which they draw their conclusions.

That's not the only source we've looked to, however. The Mayo Clinic, for instance, has also published some useful information on various types of masks and come down in favour of their use, and meta reviews tend to favour their use as well.

With nothing to lose and much to gain, it would be irresponsible for us at this point in time to fly in the face of prevailing scientific knowledge and argue against Luxembourg's (in my view rather sensible) guidance on the use of face masks. That, and not government influence over our editorial decisions, is why we have taken the line that we have.

This is a more difficult question. Lockdowns certainly come at a cost to the economy, as we have both seen and reported on continuously: from the economic hit to shops, the HORECA sector, and tourism to name but a few.. the cost of locking down both nationally and internationally has been enormous, and in the long term this may well cause severe and long-lasting damage to our economies. It will also have knock-on effects, and these often hit those least able to afford it the hardest.

In other words, lockdowns are not universally and solely a good thing. But are they entirely ineffectual when it comes to halting the spread of the virus? Well, no (1, 2, 3, 4, 5), it seems that they do work - and the reasons are pretty simple: fewer people in movement, fewer people in densely populated situations, lower rate of transmission, effectively.

The question then becomes one of whether it's worth the economic and potential future social cost to lock down today, and that's a much larger concern to which we won't have an actual answer for years to come, as we see the impact of various governments' decisions and approaches.

The virus is becoming less dangerous

This argument tends to be based on the fact that Luxembourg has seen a decline in the number of cases, and that (as previously noted) we now have far fewer people in hospital care, and yesterday's report saw zero people in intensive care. We have seen similar declines in other countries, including some that were initially hit very hard by the virus.

There is thus an understandable temptation to say that the virus seems to have become less dangerous, but this ignores the fact that we have taken a raft of measures to hinder its continued spread, treatment has become more effective, and we test far more (including asymptomatically) which means we catch cases earlier and break chains. That is to say, it stands to reason that what we're seeing isn't the result of a less dangerous virus, but a better response on both the individual, governmental, and healthcare level.

Viruses do mutate, and so has this one - you may have seen some stories about the D614G mutation, for instance. Evidence on the impact of mutations so far is quite limited, and while we have seen some suggestion that the now-dominant D614G is less deadly, this has been both limited and questionable, and it also seems to spread more effectively. The BBC, if you trust them as a source, has a nice and easy-to-follow overview.

Given current information, it would thus again be irresponsible of us as a news outlet to cherry-pick among the extant evidence and say that the virus is becoming less dangerous. There is simply no evidence of this, and we mustn't forget that while things are relatively calm here, they are not elsewhere (see also this, and this).  Things can change very quickly.

The vaccine will be dangerous - and media outlets are selling it

Let's start with the second point first. I've seen suggestion that we in the media, and even us at RTL Today specifically, are "selling" "the vaccine" as we (and the dark forces that control us) stand to gain from as many people as possible taking it. Believe you me, I would absolutely love to get a share of the profits from a potential future vaccine, whether directly or indirectly through some form of sales bonus.

The problem is, that's not true. We don't stand to gain more than anyone else from a potential vaccine, and let's be clear on the fact that we all stand to gain quite a bit from a theoretical, side-effect free and fully effective vaccine. That brings us to the second issue here: there is no vaccine that has been proven to work, and gone through the rigorous testing required for release and distribution. Not yet, anyway.

What's also curious is that we have, in fact, run several articles which take a sceptical view of rushing vaccines. This one for example. And this one.

Whether you take a potential future vaccine or not is an individual decision, and I recommend that you make an informed decision. I, for one, will weigh extant evidence carefully before I decide one way or the other.