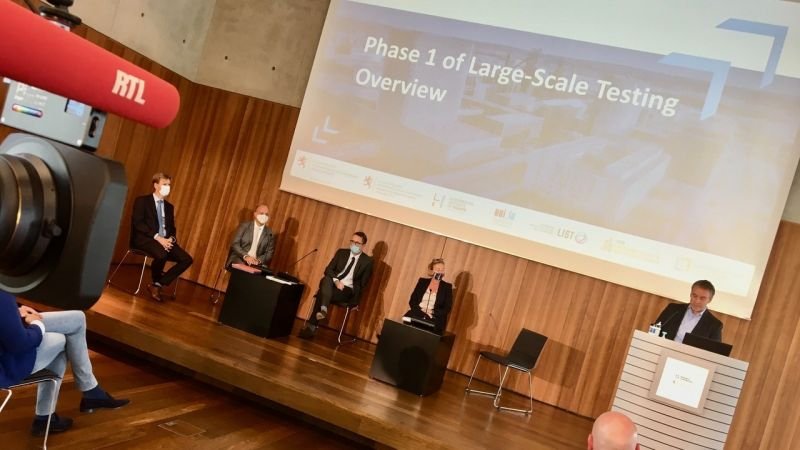 The briefing was used to present a review of the first phase of the large scale testing procedures and provide insight into the knowledge that was gained from the implementation.

Ministers Meisch and Lenert were joined on Monday by Prof Dr Ulf Nehrbass from the Luxembourg Institute of Health and Prof Dr Paul Wilmes from the University of Luxembourg, both representatives of the Covid task force. The main message of the day was clear: phase 1 was a success.

The briefing participants all painted a very similar picture, namely that the Grand Duchy had chosen the right approach to the problem by committing to the large scale testing procedures. Even though there were some undeniable setbacks, such as the low participation rate at the beginning, or the declaration of Luxembourg as an at-risk country, the insight gained through the rigorous approach has proven to be fruitful for both domestic and foreign researchers.

The speakers further unanimously agreed that the level of cooperation between all different participants was exemplary, Lenert also praising the countless volunteers who decided to take a test appointment, out of which 95% showed up in the end. Meisch expressed his hopes that this level of professionalism could prevail after the pandemic.

The scientists at the briefing were happy to delineate the amount of insight gained over the course of the past months, which had helped identify critical aspects of the virus and the manner in which it spreads. Nehrbass elaborated on how their efforts were channelled to meet the expected rate of 20,000 tests per day, a tally which allowed the task force to properly identify, monitor, and eventually break infection chains. He underlined that the number of new infections had therefore only stabilised once the full testing capacity had been reached, an indicator for the success of the strategy.

Wilmes then took over to provide further details and statistics of the large scale testing strategy:

Wilmes noted that the highest participation rate occurred at the beginning of the summer holidays, which was linked to Luxembourg's at-risk status and the fact that many holiday destinations required recent negative test results.

The next point of the presentation summarised the sectoral focus of the testing strategy, which was divided into 3 categories:

Category 2: Employees in remaining work sectors. Representative groups per sector who were either invited once or several times over bi-weekly intervals

Wilmes also talked about the regional differences in Covid-19 prevalence, noting that during the period stretching 15 July to 6 September, the south-west of the Grand Duchy saw infection rates of more than 60 cases per 100,000 inhabitants. The area with the second-highest infection rate was around the capital, with between 40 and 60 cases per 100,000 inhabitants. The south-east and north-west was between 20-40, while the north/north-eastern, central, and eastern regions saw infection rates of less than 20 per 100,000.

The researcher stated that it was subsequently deduced that private households would be the area with most new infections. In this regard, he noted that some 40% of cases appear to have been transmitted in the household.

Wilmes presentation was followed by a recorded video message from Marc Lipsetch, professor of epidemiology at Harvard university, who acted in an advisory role throughout the implementation. He congratulated the members of the task force for their success and emphasised the important role that the data could play in finding out more about the novel coronavirus.

Minister of Health Paulette Lenert then concluded the presentation by announcing that the full presentation of the second phase would presumably take place on 24 September, given that all details had been worked out by then.

The first, last and only question of the day addressed the low participation rate of some governmental departments, such as the police, which could be more incentivised by their employer.

Minister Meisch responded by emphasising that the most important principle of the testing strategy was be the voluntary basis, which would remain unchanged. He noted that the planned mobile testing stations should however make it easier for people to take the test and be incentive enough.