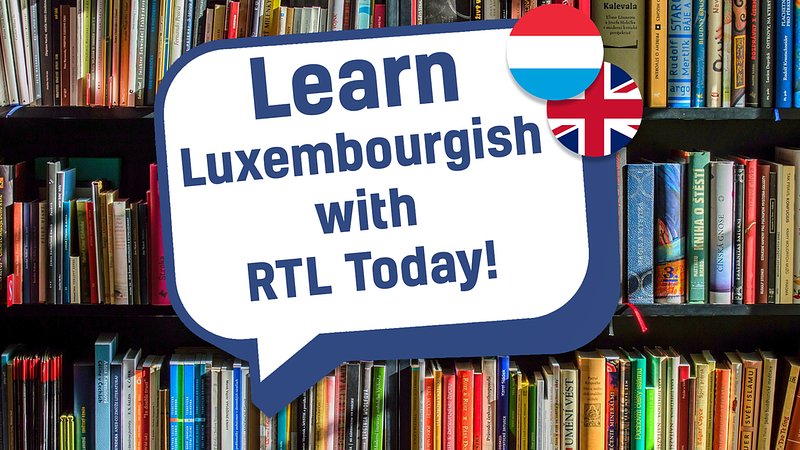 We've got a new series for all you house-bound expats out there! Always wanted to learn a bit of Luxembourgish? Well, here's your chance!

Welcome to our new series of bite-sized Luxembourgish lessons. While we at RTL Today do not at all claim to be qualified teachers in Luxembourgish, we can help our readers with the basics. As the market leader in the English language media landscape in Luxembourg, we can imagine that new arrivals might turn to us to find out about all things Luxembourg. You can check out our Luxembourg Insider series if you are such a new arrival, as we have all the information you need to get settled here.

The next step is, of course, Luxembourgish itself! Did you know Luxembourgish as a language sounds much like the lesser-spoken Transylvanian Saxon dialect? We have, of course, covered the most fundamental aspect of understanding Luxembourgish culture already, which is the importance of crémant. We’ll now dial it down to the basics: introducing yourself in Luxembourgish!

In this series, we will provide a translation for the equivalent saying, alongside a literal translation, and – most importantly – our kind colleagues at RTL Letzebuerg have agreed to provide recordings on how to say the words themselves. With all of us working from home, though, that's proven a bit tricky.. so the recordings for this particular instalment are provided by one editor's long-suffering wife.

Starting with the most fundamental aspect of introducing yourself, we have the greeting in Luxembourgish. The good news is that even people who don’t speak a word of Luxembourgish are able to greet others and engage in the common practice of saying hello to your neighbour (Londoners, take note – you should really do this).

Where needed, we’ve added a literal English translation so you can familiarise yourself with the sentence construction of Luxembourg, as much as that’s possible from these articles.

In the above table, we have three greetings, which are broadly the Luxembourgish, German, and French greetings. Salut is perhaps a bit more informal, whereas the other two are acceptable for any kind of situation, from greeting someone you might not know to passing your neighbour in the street. To go back to the Luxembourgish variant itself, you can make it a bit more formal (usually in emails) by using the good morning/afternoon/evening equivalents:

Given how cosmopolitan Luxembourg is, Hey has also become common usage. It remains quite informal. On a grammar note, you may have noticed that it's Gudde Moien, but Gudden Owend. There's a grammatical rule for this, but that's a misery we'll leave for another day.

Now you’ve managed to say hello, the next step is introducing yourself. There are two common ways to do that, and we’ll include some other phrases so you can add more information about what you do, where you’re from, and more.

Now you know how to say hello and introduce yourself, the next step is to combine the two: Moien, ech heesche Sophie.

Other phrases to include in your introduction are as follows:

A key part of introductions is asking questions of your conversation partner. For English-speaking people, this adds a spanner in the works, as Luxembourgish, much like French and German, has a polite address. You is Du in Luxembourgish, which you use for friends, family, and people you’re generally familiar with. If you’re addressing someone you don’t know, who you have a distant working relationship with, or somebody teaching you, you should use Dir, unless they say it’s okay to use the familiar form. This is referred to as duzen (informal) and dierzen (formal).

In the below table, we will add both the informal and formal versions.

It’s also worth knowing that dir can also mean you in the plural. In that case, it is not capitalised.

Starting conversations means you also have to end them by saying goodbye to people. There are two simple variants, depending on if you know when you’ll next see the person. The Luxembourgish Äddi comes from Adieu.

A lot of people in Luxembourg also say ciao to say goodbye. The Bis Muer variant can be adapted to when you’ll next see someone (den Owend – evening; nächst Woch – next week; dono – later).

That concludes our first part on basic introductions. Let us know in the comments what else you’d like to see!