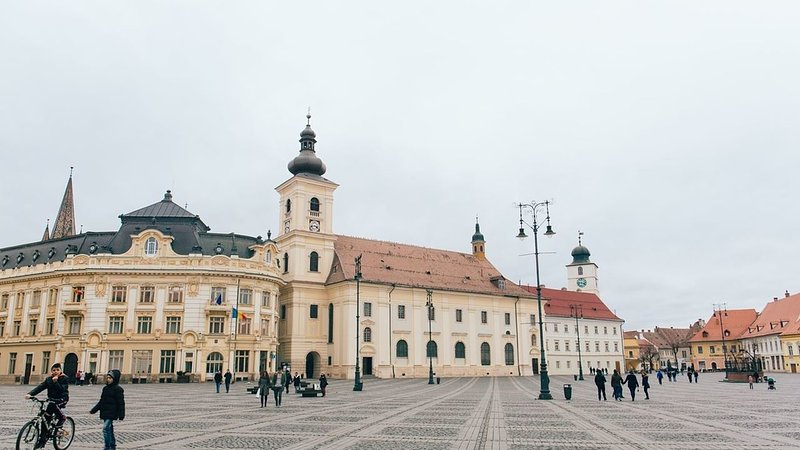 We all tend to think of Luxembourgish as a rather singular language: whilst it may be slightly similar to Dutch and German, the language is its own language, in keeping with the country's motto 'Mir wellen bleiwen waat mer sinn' (We want to remain what we are). Whatever you do, don't tell a proud Luxembourger their language is a mere dialect.

But you can tell them, if you happen to be interested in linguistics, that there is a dialect which sounds startlingly similar to Luxembourgish.

If you listen to the above video, you'll hear something that sounds like it could be a Luxembourger speaking, albeit with a bit of a German tinge. Either way, those who speak Luxembourgish are sure to understand what the man is saying - and even marvel at some of the words sounding so very Luxembourgish. The name of the dialect? The Transylvanian Saxon dialect (Siebenbürgisch-Sächsisch). How many people speak it? Where do people speak it?

Without further ado, let's proceed on our rather simplistic crash course in all things Transylvanian Saxon dialect!

Where is the Transylvanian Saxon dialect spoken?

As the name might tip you off, the dialect is spoken in Transylvania, namely central Romania. The most notable area inhabited Transylvanian Saxons is the city of Sibiu, formerly known as Hermannstadt. That in itself might be a bit confusing, but, as with all things, the history of how the dialect developed helps us understand. 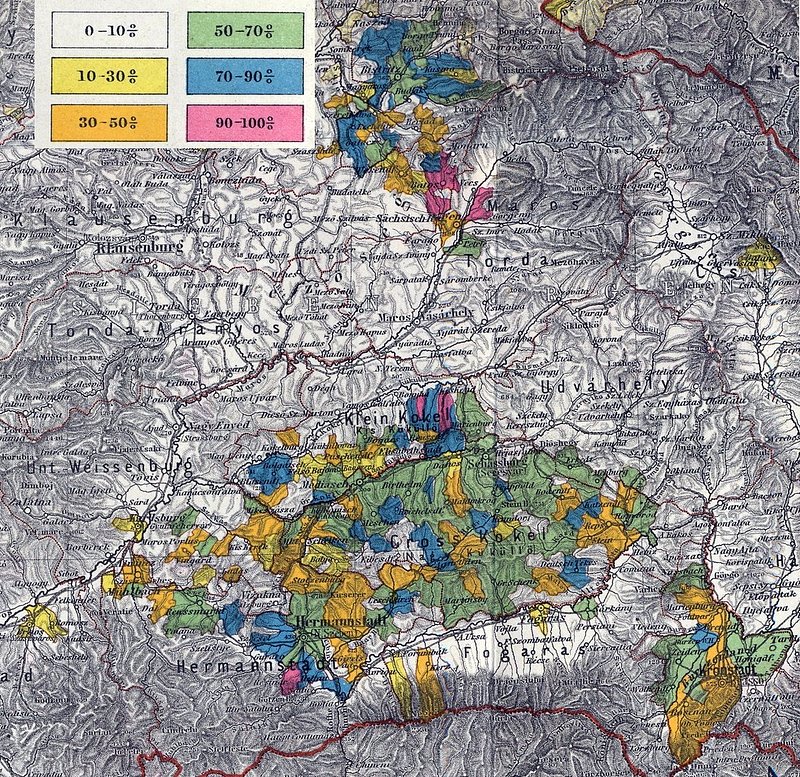 The distribution of Saxons in Transylvania during the 1890 census. / © Public domain

The twelfth century saw a number of ethnic Germans migrate eastwards upon the invitation of King Geza II of Hungary (1141-1162). During that time, modern-day Romania belonged to the Kingdom of Hungary and King Geza wished to populate the area in order to defend the south-eastern border against Tartars and Cumans. These ethnic German were incentivised to colonise the area because they were given free land and could flee poverty in their homeland. In German, this ethnic group is called the Siebenbürger Sachsen, with 'Siebenbürger' translating as 'seven fortresses'.

The etymology of this name comes from the fact that the Transylvanian Saxons began calling themselves the Siebenbürger Sachsen, because they built seven fortresses, including then-Hermannstadt, in the area they were given by the Hungarian King. They settled in areas they called Weinland and Altland, which surrounded Hermannstadt/Sibiu and Mediasch/Mediaș. Not only are the Transylvanian Saxons the largest German ethnic group in Romania, they are the oldest group too, having settled in Transylvania for nearly a millennium.

Here's the interesting thing - Transylvanian Saxons aren't actually Saxons. The origins of this ethnic group can notably be traced back to Rhineland, including other areas in Western Europe such as Thuringia, Bavaria, Flanders, Wallonia. As you can tell, we're inching quite close to modern-day Luxembourg, and it seems a significant amount of Transylvanian Saxons emigrated from what is today Luxembourg! 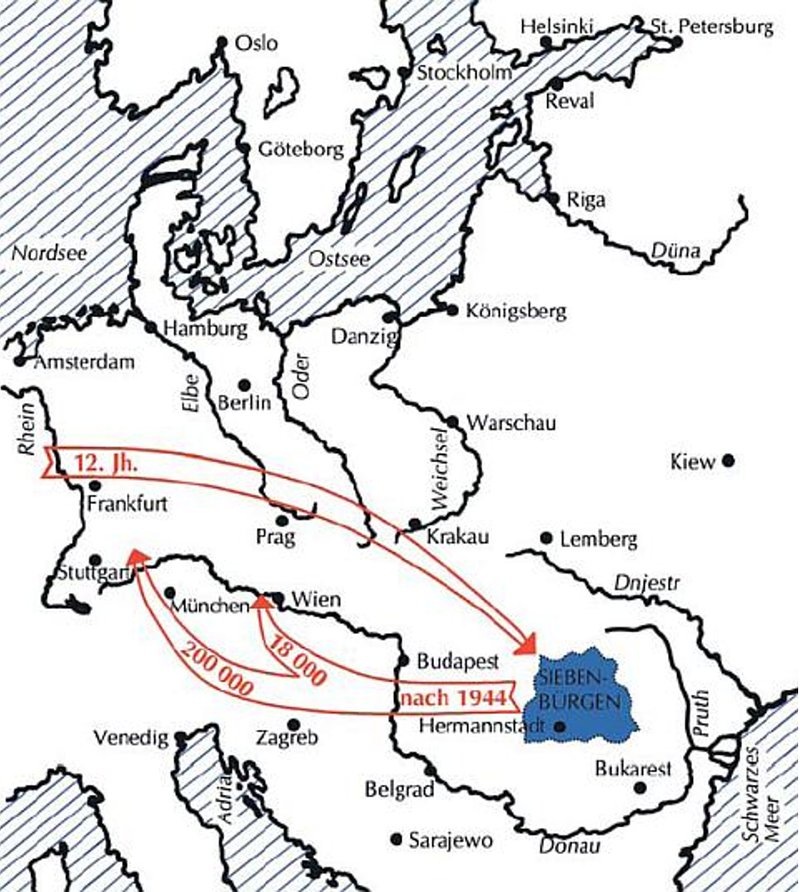 Both the Transylvanian Dialect and Luxembourgish belong to the Moselle-Franconian (German: Moselfränkisch) dialectal branch of the German language, and consequently, Luxembourgish remains the linguistically closest relative to the Transylvanian Saxon dialect. Those who migrated were often poor miners or convicts from Saxony, hence the overall demonym of Saxon.

How many speak Transylvanian Saxon?

During the course of the twentieth century, the majority of Transylvanian Saxons emigrated away from Romania, with the biggest exodus occurring after the collapse of the Ceaușescu regime in 1989 (an estimated 500,000 Transylvanian Saxons left Romania, mainly to go to Austria or Bavaria). Now, only 36,000 ethnic Germans remain in Romania, of which 11,700 were of Transylvanian Saxon descent according to the most recent census. It is also not entirely sure whether all of those individuals speak the dialect. The dialect is also the native language of current Romanian president Klaus Werner Iohannis. As time has gone on, Transylvanian Saxons have migrated further west, towards pockets of the United States of America and Canada.

What are the similarities with Luxembourgish?

Schäßburg in German or Sighișoara in Romanian is Schäsbrich in Transylvanian Saxon, with two other examples also seeming familiar to Luxembourgish speakers: Mühlbach - Sebes - Melnbach and Michelsberg - Cisnădioara - Mächelsbärch. The last one is the Transylvanian Saxon name for the towns and these sound like they wouldn't be especially amiss on a Luxembourgish map.

A side-by-side comparison of some lines from a  ballad in Transylvanian Saxon and German shows further similarities with Luxembourg:

(Translates roughly to:
'Good day, good day, you dear sirs,
now I would like to talk to you!

What did my wife and child do to you,
that you knocked them down on me?')

What's more, these similarities have been acknowledged officially. Both Luxembourg City and Sibiu shared the title of European Capital of Culture in 2007. The city forged a close relationship with Sibiu during this year given their historical and linguistic links. In 2003, the 'Casa Luxembourg' was inaugurated in Sibiu, funded by Luxembourg's National Sites and Monuments Service. Casa Luxembourg now houses the Council of Europe's Institute of Cultural Routes, a tourist office, and a languages institute. The emphasis on the connections with Transylvania comes amid a renewed drive in maintaining and highlighting the importance of the Luxembourgish language.