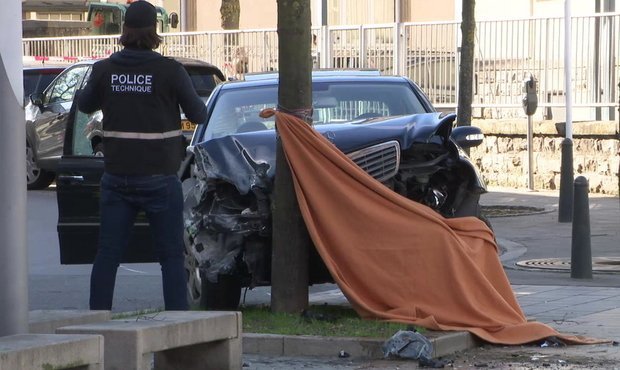 On Friday, the court was shown a video reconstructing the acts of a former police officer accused of homicide after shooting a motorist dead in Bonnevoie four years ago.

Friday's session of the trial surrounding a fatal shooting by a police officer in Bonnevoie revolved around the viewing of a video reconstruction of the events in April 2018. The accused is said to have shot the driver of a vehicle travelling at 30km/h in the direction of the officer.

The film, which had a duration of three hours, contained eyewitness accounts from the incident itself. Three police officers who were present on the day, and assisted the accused in the attempt to stop the driver, also gave their account of what had transpired - including the accused himself.
The video, which was filmed in September 2019, shows that all the officers involved were still fairly young at the time of the incident. The accused was aged 22 at the time of the shooting and had been part of the force for just eight months.

Two of the officers conducted the pursuit of the rogue driver on foot. One of them had drawn their weapon prior to the shooting when the vehicle crashed into a parked car. The driver then failed to stop when requested by police and continued to drive the vehicle in the direction of the two officers.

A key point in the trial is the accused's exact positioning at the time of firing his weapon, in order to determine whether he was acting as part of an immediate emergency, or if he had had other possibilities to resolve the situation.

Here the perception of the incident differs. Did the accused take a step before he fired his gun? Did he stay put when firing the three shots, or did he move? There are no clear answers.

In his testimony, the accused said the car had come to a complete stop some three metres away from the police vehicle, at which point the former officer climbed out of the police car and asked the rogue driver to get out of his car. However, the victim failed to do so, instead choosing to reverse his car by around 15 metres.

At this point, the accused said he drew his weapon and called for backup using his radio. The Mercedes driver then proceeded to drive towards him at 30km/h, causing the officer to discharge his weapon three times in the direction of the Mercedes. The car then passed the police van, before colliding with a tree. The driver later succumbed to his injuries in hospital.

The trial continues next week.