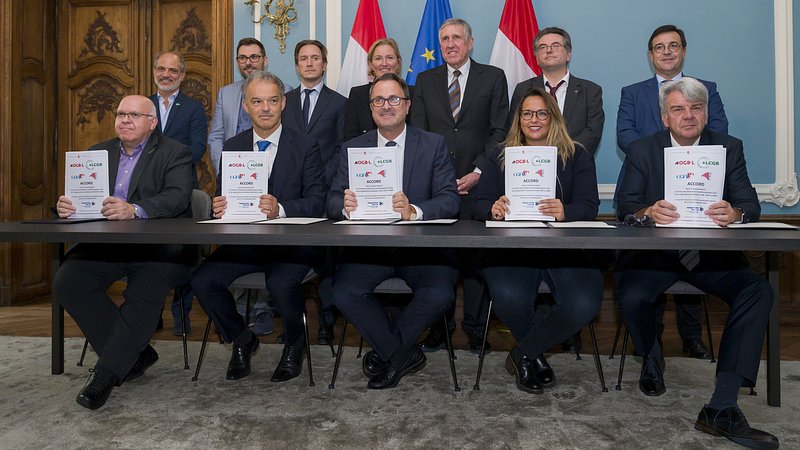 While the trade unions are satisfied with the "Solidarity Pack 2.0", the country's employers only begrudgingly signed the agreement.

"Two major tripartite meetings in one year are proof of the exceptional nature of the situation we are in," Prime Minister Xavier Bettel stressed during his declaration in the Chamber of Deputies after the government, the Luxembourg Employers' Association (UEL), and the three trade unions OGBL, LCGB, and CGFP officially signed the tripartite agreement on Wednesday afternoon.

The Solidarity Pack 2.0 will cost the state €1.1 billion. The aims of the agreement are described as follows: slowing down inflation, assisting households and companies through specific measures, and favouring the digital and energy transition.

The negotiations have once again been difficult, the Prime Minister stated, but by working together, the social partners managed to find "a joint solution" in a time when Luxembourg is facing "one of the worst crises in the history of our country" and households as well as businesses need help.

Xavier Bettel said that he is happy that this agreement will not result in the deferral or cancellation of a wage indexation. If a third indexation is triggered next year, it will be paid out in addition to the other two. In this scenario, the government would commit to compensating businesses in order to fully absorb the impact of the 2.5% wage increase for the rest of the year.

The Prime Minister pointed out that, including the measures of the "energy roundtable" and those of the first tripartite in spring, the government made about €2.5 billion available. According to Bettel, this is "a significant amount of money," even in an international comparison.

After the social partners received the final draft of the tripartite agreement, employer representatives were quite surprised to find that two paragraphs were seemingly missing. The paragraphs in question were supposed to stipulate that businesses would be compensated by the state if a third wage indexation were to be triggered and that the social partners would be reconvened before 1 January 2024 to discuss the phasing out of the measures. For this reason, the agreement was amended one last time on Wednesday morning. However, even if all three trade unions and the UEL signed the agreement in the end, both sides are not at all on the same page.

Nora Back, the president of the Independent Luxembourg Trade Union Confederation (OGBL), stated that she is happy that the wage indexation system will be maintained and that the gas price cap and the freezing of electricity prices will slow down inflation. Back rejects the criticism that a general energy price cap is not socially selective. According to the OGBL President, "not everyone has the choice to save the same amount". She points out that people with low incomes who live in poorly insulated homes cannot restrict their gas consumption as much as others, while tenants have no influence "whatsoever" on how their house is heated. This is why it is difficult "to punish people financially to incentivise them to save energy," Back explained.

The social partners bank on a "collective effort" to save energy. Patrick Dury, president of the Luxembourg Confederation of Christian Trade Unions (LCGB), and Romain Wolf, president of the General Confederation of the Civil Service (CGFP), are also pleased that people will now receive "swift relief". However, both remain concerned that the war in Ukraine is probably far from over.

"We are not happy, but what was decided is what was possible," UEL President Michel Reckinger stated. The only positive aspect in the eyes of the employer representatives is that they have achieved that businesses will "only" have to pay two and not up to five wage indexations. According to the UEL, the indexation system is the "wrong instrument" in the current crisis. Reckinger stressed that "the index is completely anti-social," pointing out that "the gap between rich and poor is widening and if the other side doesn't want to understand that, then I don't understand either".

Because of this, it took a long time for the UEL to convince its members to support the agreement, Reckinger explained. The fact that two paragraphs were missing in the final draft was "probably a mistake". Reckinger made it clear that the UEL does not accuse anyone of having had "bad intentions".

The Christian Social People's Party (CSV) supports the tripartite agreement. Gilles Roth, the co-chair of the CSV's parliamentary group, nevertheless still criticises the government for "not saving money when times were good". In addition, the CSV insists that the adjustment of the tax table to inflation is "urgently needed".

The Luxembourg Socialist Workers' Party (LSAP) would also like to see a tax reform in addition to the agreement, the party's parliamentary group chair Yves Cruchten said. "If the figures on the state finances, which the Minister of Finance presented to us this week, are confirmed in the coming months, then no government can get around passing a tax reform," Cruchten stressed.

Both the LSAP and the Green Party rejected the criticism that due to the price caps, there would be no more incentive to save energy. The prices are already high, according to the chair of the Green Party's parliamentary group Josée Lorsché. "What the agreement certainly does not prevent is saving. Saving energy remains as important as ever before and I am convinced that everyone has got the memo by now," Lorschée stated.

A special parliamentary committee will write the laws, which will then be voted on at the Chamber of Deputies.