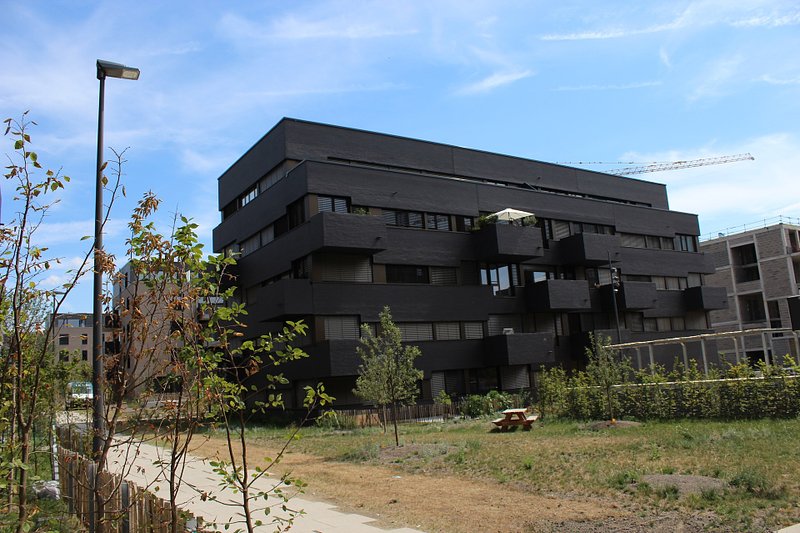 In Kirchberg, numerous people recently moved into these new flats. But some of them are facing many problems. / © Thomas Toussaint / RTL

In Kirchberg, the inhabitants of new residences are confronted with multiple defects and faults. They say they are "disappointed" by the reaction of the National Society for Affordable Housing (SNHBM), which marketed the flats.

Shiny new flats, surrounded by greenery and located in the top location of Kirchberg. On paper, these new SNHBM homes on the edge of Boulevard Adenauer seem ideal.

But for several months, some of its residents have been complaining about persistent defects.

Our colleagues from RTL 5 Minutes were able to visit the site and have seen first-hand that mould is forming not only on the walls but also on the belongings stored by residents in the cellars – even though the latter were built for this purpose.

Éloïse*, a homeowner elected president of the ownership committee, explained to our colleagues from RTL 5 Minutes that she is concerned by this problem. In February, she noticed black spots on the walls. The seal of her freezer had also turned black, and a deposit had formed on her belongings.

She did move some of her stuff, but some of them remained there. A friend who works in the construction industry found – by using an admittedly very casual measuring technique – that the humidity was way too high.

"There is a lot of anger and frustration. We are disappointed in their behaviour. We don't know why nothing is being done."

In the basement, an expert did visit on 8 June, but as of 20 July, the owners were still waiting for his report. "On the spot, the expert told me that the floor and walls were dry." Meanwhile, the property is slowly but surely deteriorating under the effect of fungus. "There is a lot of anger and frustration. We are disappointed in their behaviour. We don't know why nothing is being done."

In July, the SNHBM fortunately had portable devices installed to dehumidify the air in the basement. However, this solution is still doing little more than patching up the problem, especially since the reservoir of the devices fills up quickly. 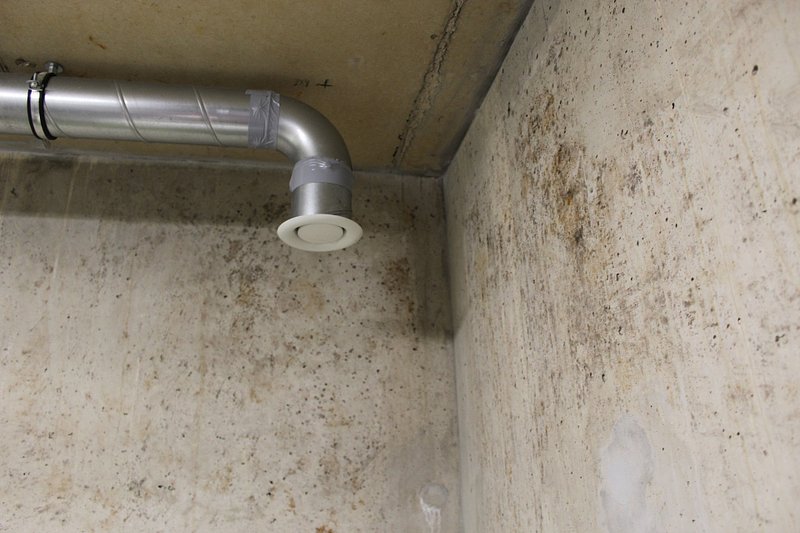 In the basement, mould has invaded the cellars of many residents. / © Thomas Toussaint / RTL

At home, Éloïse has another problem: several of her windows are scratched. To avoid ignoring them, she has put post-it notes on all the damaged ones.

Upstairs, Nathan* has the same problem: his flat has a lot of windows, most of which are scratched. "They were installed like that. I haven't touched them, and I've even avoided cleaning them, so as not to be accused of scratching them myself."

Not to mention the fact that some of them tend to whistle loudly, if it's windy. "I've already slept in my bathroom for two nights to finally get some peace and quiet," he bemoans. He showed our colleagues from RTL 5 Minutes a video of a neighbour whose window also whistles loudly when it's windy.

The other problem with his flat is more difficult to measure: it is rather unpleasantly hot and humid. At the beginning of July, our colleagues from RTL 5 Minutes were able to experience for themselves the "suffocating" and "heavy" air in the flat. They report that it is uncomfortable even when you are just sitting down.

Nathan believes that the issue is poor airflow. He says that he frequently experiences headaches at home. Experts have been there, two air infiltration tests have been carried out, but nothing abnormal has been found.

On the other hand, it was the cold that got to him during the winter. "Even my guests complained about the temperature," he confirms. Again, an expert could not find anything wrong. 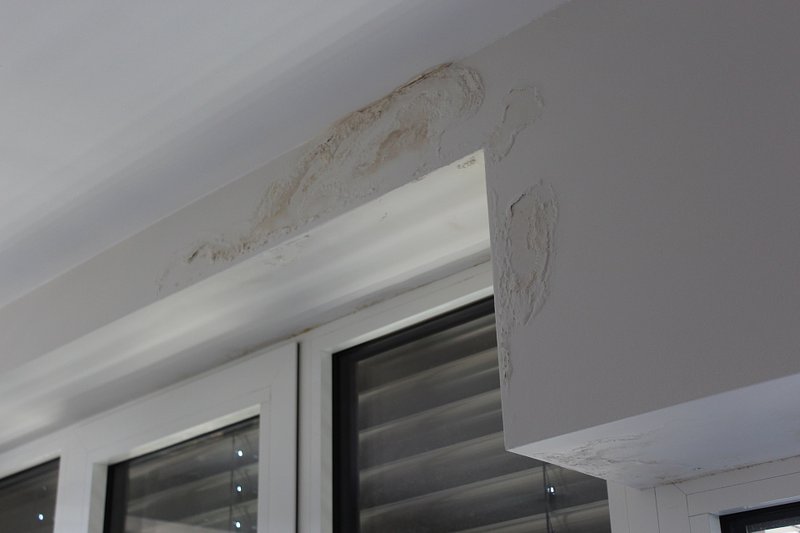 Olivia*, also a resident, had a leak in her room. Traces of water seepage have been visible in her home since winter. The paint is peeling, but since then "nothing has been done". "Why is it taking so long? We can't live like this, it's not healthy," she says, distressed by the water damage. The builder has been informed and is trying to find out if they are responsible for the problem. Although the leak has stopped, Olivia fears that it will start again once the cold weather returns.

Another problem for many residents are… the peepholes. As they are all placed at about 1.70m from the floor, they are simply unusable for shorter people. 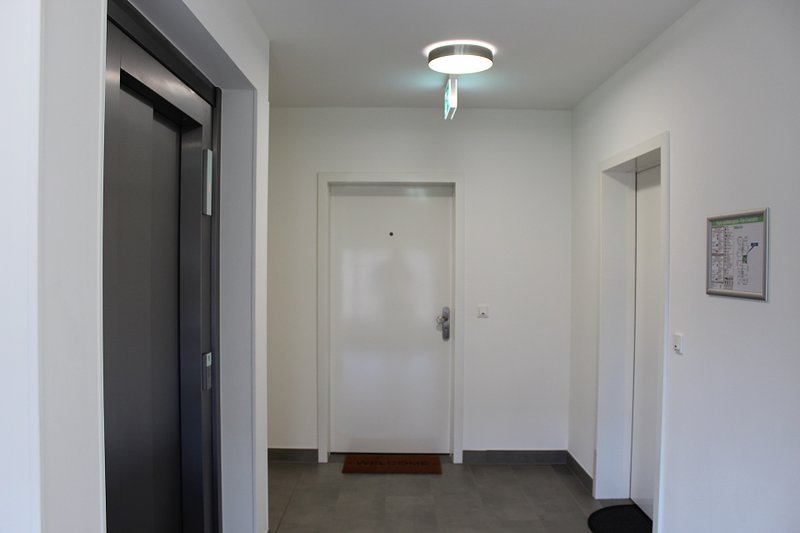 A letter of complaint

On 9 June, several co-owners who were tired of their individual and fruitless contacts decided to mobilise their ownership committee. Together, they sent a letter to the SNHBM, which is also the syndicate of co-ownership, to draw attention to the persistent problems. "Unfortunately, we do not always have precise enough information about what is being done to deal with the grievances we have raised, and even less about a possible timetable for resolving the problems we have noted," they wrote. A situation that generates "anguish, frustration, inconvenience, and a feeling of disrespect among many residents".

This is especially true considering that Nathan and Éloïse repeatedly told RTL 5 Minutes that they were discouraged from complaining when they received their keys a few months back. However, our colleagues did not press the SNHBM on this issue.

What does the SNHBM say?

On 12 July, SNHBM and one of the contractors replied. They immediately confirmed that the windows installed were compliant and even more airtight than required by law. The service provider cleared its name by saying that it was a question of "internal scratches that occurred after our work was concluded and which cannot therefore be attributed to us". SNHBM has yet to give its opinion. Several adjustments have been made to improve the ventilation of the common areas, which the residents considered to be poor.

However, on Friday 29 July, Nathan confirmed to our colleagues from RTL 5 Minutes that his problem of "moist" air had still not been resolved. He said that measurements had been taken, but that he was unable to determine the cause of the problem. "We are working on it," the SNHBM wrote in its letter. The temperature of the dwellings is, on the other hand, judged to be "in conformity" with the planned energy performance certificate.

'Redevelopment as soon as possible'

Contacted by RTL 5 Minutes, the SNHBM confirms that it received reports "as soon as the first clients moved in". Their complaints have been "recorded" and the SNHBM confirms that it is "trying to proceed with redevelopment as soon as possible". As a developer, it explains that it is bound by "biennial and ten-year guarantees". On the other hand, the SNHBM recalls that it did not build the residences itself, but "proceeded with tenders according to the rules of the public market". It was therefore the companies that won these contracts that carried out the work. "The SNHBM therefore passed on the clients' complaints to the companies concerned, asking them to resolve them as quickly as possible," the SNHBM said. "However, we are dependent on the other companies to resolve them."

The latter would be well advised to act as quickly as possible. These mishaps have taken a toll on the morale of the residents. Now that they have moved into new homes, they are tired and weary of the months of waiting. "I wouldn't be surprised if some of them wanted to leave," says Eloise.

* The first names of the residents have been changed.