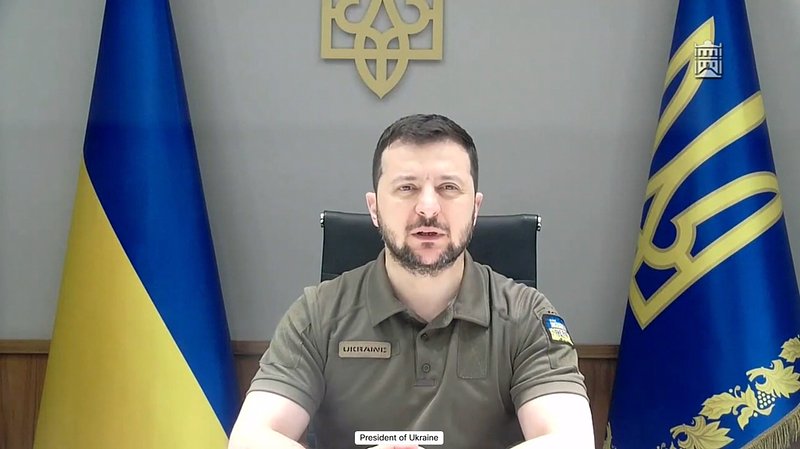 The Ukrainian President quoted this line from the Luxembourgish folk song 'De Feierwon' during his speech to the Chamber of Deputies.

It was the first time that the Chamber welcomed a head of state of a country that is at war. Zelensky spoke to MPs via video call.

The Ukrainian President expressed his gratitude for the Grand Duchy's support while also reiterating that his country needs more weapons to fight the Russian troops.

Zelensky demanded further sanctions against Russia and called on EU member states to start preparing a seventh package of sanctions. Russian funds frozen in EU countries should be invested in the reconstruction of Ukraine, according to Zelensky.

The Ukrainian President also invited the President of the Chamber of Deputies, Fernand Etgen, and Prime Minister Xavier Bettel, to Kyiv.

After Zelensky finished his speech, MPs stood up to give a standing ovation to the Ukrainian President, who stressed that this war is "decisive for Europe and its values".

Also present in the Chamber's gallery was Ukraine's Deputy Minister of Foreign Affairs, Emine Dschaparowa, as well as a large Ukrainian delegation and several diplomats.

Zelensky spoke for a little less than 13 minutes. In his 17-minute-long response, Prime Minister Xavier Bettel repeatedly stressed that Ukraine can count on Luxembourg's support.

Considering the country's size, Luxembourg is among the countries that provide the most support to Ukraine, Bettel said, both financially but also regarding the reception of Ukrainian refugees. Around 5,500 Ukrainians have so far come to Luxembourg.

The Prime Minister announced that the government is willing to supply further military equipment and weapons to Ukraine.

The government is also in favour of further sanctions against Russia. The Prime Minister assured the Ukrainian President that he has already contacted Hungarian President Viktor Orban to discuss Hungary's blockade of the sixth package of sanctions.

"Peace has a price for us all," Bettel said. "Everything that we are currently losing is money, you are losing human lives," the Prime Minister said to the Ukrainian President.

Regarding Ukraine's potential future in the EU, Bettel chose a slightly more nuanced tone. He pointed out that "it is difficult to find an agreement" between 27 member states and that the European Commission is still working on an official opinion. If the Commission stipulates conditions under which Ukraine may receive the status as ''candidate for application', Luxembourg will do "everything in its power" to help Ukraine fulfil these conditions "as quickly as possible," Bettel stated. However, Bettel also added that "a candidacy does not automatically equate to membership".

The Prime Minister called on President Zelensky to also speak to political leaders from African and South American states. As the Ukraine war risks plunging numerous developing countries into famine, it is important not to lose allies to Russia, according to Bettel.

Bettel added that he has been informed that the Kremlin is already working on a narrative to blame the EU for looming food crises.

The Prime Minister also told the Ukrainian President that he is willing to lend his support in the case that Zelensky decides that he would be willing to negotiate with Moscow.

An overwhelming majority of MPs made it clear that they were in favour of lending further support to Ukraine, a sentiment which they also expressed in a motion. For the MPs, this support should also include supplying Ukraine with heavy weapons, supporting the country's application to join the EU, and upholding the embargos placed on Russia.

Several MPs expressed regret that the EU's unity recently started to crumble due to Hungary's refusal to back the latest package of sanctions. In this context, the Prime Minister stated that he thinks the chances are low that the EU will ever decide on a gas embargo against Russia.

MP Claude Wiseler from the Christian Social People's Party (CSV) stressed that "our only goal must be to ensure that Ukraine wins the war". Allowing Putin to win would be "dangerous" and showing strength and unity "is the only thing that counts right now".

MP Gusty Graas from the Democratic Party (DP) raised the rhetorical question of whether Luxembourg wants to prioritise "its comfort or world peace". Graas stressed that providing international help is more important. The MP demanded that "a new Marshal Plan" should be prepared straight away to fund the reconstruction of Ukraine. He also criticised the "naivety" of past governments regarding Russia.

On the other hand, MP Yves Cruchten from the Luxembourg Socialist Workers' Party (LSAP) argued that "now is not the time to assess what we did wrong with Russia". That moment would come eventually, however, and Cruchten stated that Luxembourg must define new standards that would determine "with whom we do business".

The motion at the end of the debate was supported by the majority parties as well as the CSV and the Pirate Party.

Meanwhile, MP Fernand Kartheiser from the Alternative Democratic Reform Party (adr) mainly emphasised the importance of peace talks. Kartheiser also argued that preparations for a "national reconciliation" in Ukraine should start immediately. The MP stressed that the adr is concerned that the sanctions against Russia will cause a recession in Western Europe while "doing nothing to bring an end to the war".

MP Nathalie Oberweis from the Left Party (Déi Lénk) also stressed the importance of peace talks, pointing out that this perspective "is currently missing". Oberweis also distanced herself from the "narrative" that the War pits "a unified West against an autocratic Russia". Instead, the MP demanded that Russia should receive "security guarantees".

Important information on settling in Luxembourg, as well as daily news in Ukrainian