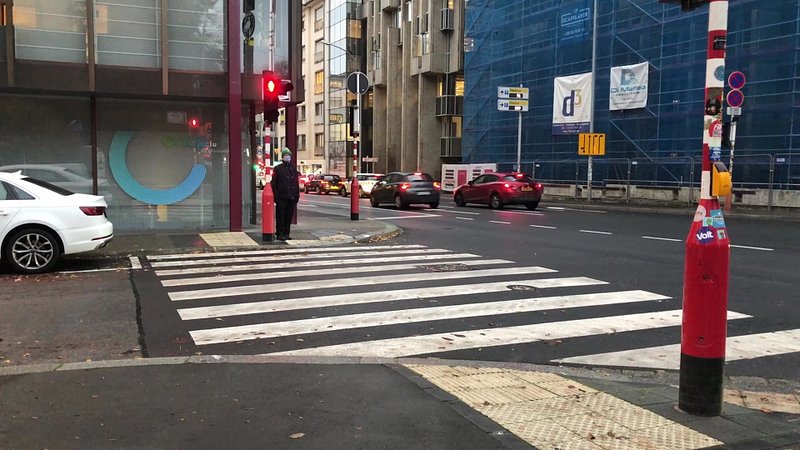 Activists from the Centre for Urban Justice (ZUG) want to draw attention to a number of dangerous locations in Luxembourg City.

The Centre for Urban Justice criticised the municipality of Luxembourg City for having several hundred illegal zebra crossings in town and showing little interest in improving the situation. Our colleagues from RTL spoke to ZUG members about their desire for more transparency and a better dialogue with City officials.

The Centre for Urban Justice was only founded last year. The organisation primarily focuses on inner-city problems that relate to public infrastructure.

Thorben Grosser, ZUG co-founder and project manager, explained: "We monitor how infrastructure is restored among other things. The City has a site where people can alert authorities about damaged rubbish bins or potholes. However, the site does not work very well for blind people or those with bad vision, which is why we launched a programme that will automatically share this information on Twitter."

The 'Report-it' Twitter page also keeps track of whether the problems are solved in the end, which the municipal site fails to do, Grosser further noted.

The dispute over the conformity of the City's zebra crossings also continues. After the municipality denied ZUG accusations that 425 pedestrian crossings had issues, the organisation now intends to get access to the respective documents through legal challenges.

The 'Safe Crossing' project thus continues to take up a lot of attention, as ZUG members complaining about a general lack of trust in the statements made by Luxembourg City officials: "A few weeks ago, the Mayor claimed that 87% of streets in the City are 30 km/h zones. This information was double checked and simply turned out to be a lie. No matter how you twist and turn the numbers, you arrive at 35% at best. This is why it is important to us that transparency is increased and more data published."

The dataset from our "Safe Crossing" project is now online!

➡️ Almost one third of pedestrian crossings within @CityLuxembourg appear to be non-compliant with the Code de la Route!