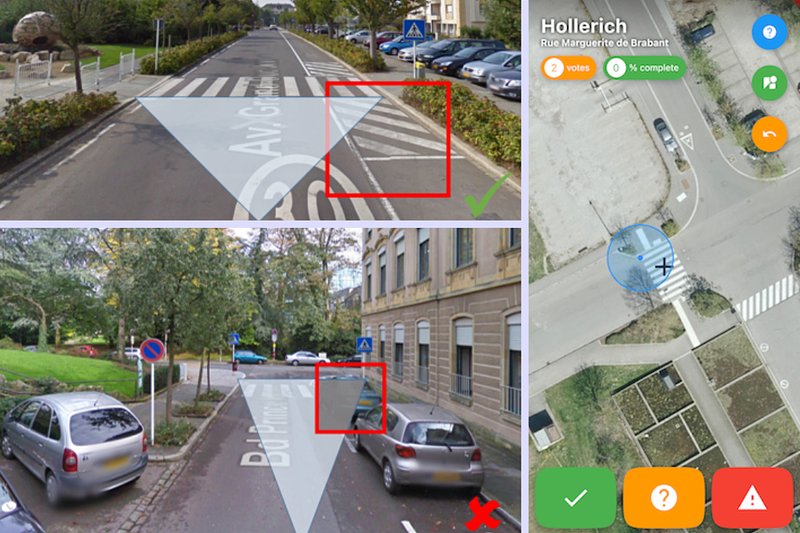 A new project asks volunteers to analyse satellite imagery of Luxembourg City and identify whether pedestrian crossings are in line with the Code de la Route (Highway Code).

"Safe Crossing", a crowd-sourced initiative, has identified over 425 crossings likely violating the Code de la Route, with over 1,787 crossings analysed in total. Access the map here.

This means that roughly a third of all pedestrian crossings in the City of Luxembourg may not be setup according to the rules of the law, despite the fact that such flaws have already been brought to attention of city leaders by an audit on pedestrian security in 2015, the platform underlines.

The data was generated between June and August of 2021 by 20 active volunteers, who installed a custom-made app and manually assessed whether parkings spots were within five metres of pedestrian crossings. The distance can be measured with a dedicated feature in the app.

Volunteers then click one of three buttons; no parkings within five metres of the crossing (in compliance with the law), parking spots within five metres of the crossing (in violation of the law), and a last button to indicate they were unsure (for example because trees impeded visibility of the pedestrian crossing). After making a choice, the volunteer was presented with a new pedestrian crossing, and so forth. Data collection stopped when all crossings in the database had at least 5 votes each.

While the crowd-sourced data may be subject to human error or other factors such as the quality of OpenStreetMap or Geoportail, the results are still a good indicator of road safety.

"Every human being that is hurt on our streets is one too many - and city leaders should do everything in their power to protect people as they walk or cycle. However, it turns out that when it comes to one of the most basic infrastructures for soft mobility, pedestrian crossings, there has been a lot of "creativity" to squeeze in more parking spots at the expense of pedestrian safety.

Most often, this creativity manifests itself as starting the curb-side parking spots already well before the 5 metre minimum distance from the pedestrian crossing, but only letting the designated lay-by reach the full width exactly at the 5 metre mark. This is technically allowed by the Code de la Route, but on many pedestrian crossings this flexibility is stretched to the absolute maximum."

With reduced field of vision, pedestrians are exposed to more danger. Thus, the project aims to highlight the problem and motivate council leaders of the municipality to make the capital a safer place.

More information on the project here.