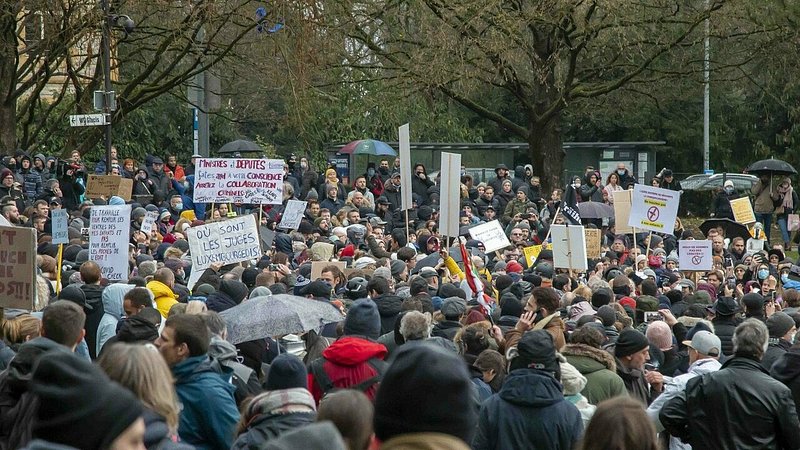 Dr. Anja Leist, professor at the University of Luxembourg, spoke to RTL's Sabrina Backes about the people inciting violence at recent Covid protests.

Footage of last weekend's protests, which quickly descended in riots, have made headlines in Luxembourg all week. Away from the peaceful demonstrations, a group of anti-vaccine protesters were seen causing chaos, damaging property, and carrying signs equating Covid measures with the Holocaust and Nazi regimes. Who are these people and what is driving them? And how should the government react?

Dr Anja Leist says there must be a distinction between people who do not wish to get the vaccine due to uncertainty or fear, and those who refuse the vaccine point blank. Dr Leist participated in the Covalux study, which analysed Luxembourg residents' response to the vaccine, and investigated people's reasons for reluctance.

She tells RTL: "These are usually younger people who do not view themselves as being at risk of catching Covid, and mostly they prefer to see how their peers cope with the vaccine before they make a decision to vaccinate themselves. There are also people who maybe don't have the right education, and don't feel very informed over the decision."

But what about the people who resorted to vandalism as a method of expressing their views on the vaccine? At present, there is no full overview on these people, says Dr Leist. But we could look towards Germany for similar demonstrations and see the same sort of people interfering here, she says.

With regard to the protesters last weekend, it is difficult to ascertain whether these people belong to a certain political school of thinking, says Dr Leist. She points out that the rioters constitute a very small minority of the population, while the majority supports the vaccine, as underscored by the data. This could be helpful for those uncertain of the vaccine, as it signals that most people are in favour of getting the jab.

A vaccine week would also go a long way towards convincing those who are unsure, adds Dr Leist. This method makes the vaccine more accessible to the public, with mobile teams offering jabs at public places such as shopping centres. A vaccine mandate, in comparison, is problematic, says Dr Leist.

"People like to decide of their own free will, or after they have been told why they should be vaccinated, namely, because it is much safer to get vaccinated than not, then you can reach people. But as a rule, vaccine mandates as discussed or implemented in other countries are not particularly productive."

The professor recommends the use of more targeted information campaigns, which the government has already implemented to some degree on the impfen.lu website, which offers advice on interpreting data, as well as listing the benefits of vaccination. It would be useful to publish information on other platforms in order to reach more people, adds Dr Leist.