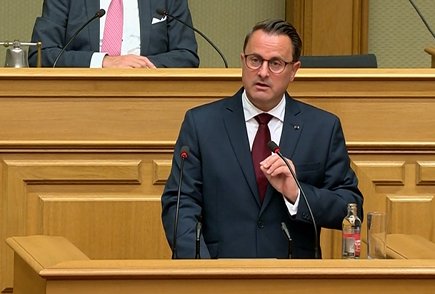 Climate change, the housing crisis, and of course, coronavirus - these topics made up the majority of Prime Minister Xavier Bettel's State of the Nation speech to mark parliament's return to the Krautmaart this afternoon.

In a speech which filled the best part of two hours, Luxembourg's premier took stock of the last 18 months, and outlined his tripartite government's plans for the country's future on a national and international scale. It also represented the first time the Chamber has gathered at its usual home in the Krautmaart, following a move to the Cercle last year where MPs were better able to observe social distancing.

The impact of the pandemic has had lasting effects on all levels of society - something which the government has taken into account when planning for the next couple of years. But the main focus of Bettel's speech on Tuesday was the climate crisis, and Luxembourg's role to play in encouraging sustainable practices across the board.

"The climate crisis is real - it affects us all"Using July's devastating floods in Luxembourg and its neighbours as a key example, Bettel explained there are three things the government must focus on with regard to the climate crisis. There is "no other choice", he says.

Firstly, the government will look at reducing greenhouse gas emissions to slow down global warming. Secondly, massive investment will be allocated to the research and development of new and innovative technologies that will help stop climate change in the long term. Thirdly, the state will install preventive measures against the harmful effects that global warming is already causing.

Scientific authorities urges climate neutrality by 2050. Luxembourg wants to reduce greenhouse gas emissions by 55% by 2030, with an increased focus on wind and solar energy.

Luxembourg now produces three times as much wind energy as it did five years ago. Solar energy has also seen an upswing, boosted by the low tariffs for solar panel installations introduced last year. Plans are afoot to install panels on the roofs of existing buildings across the country, including offices, schools and car parks. The Duchy has plans to invest in offshore wind farms in Denmark and Belgium, as well as looking at alternative energy sources such as biogas and hydrogen.

Provisions will also be made for boosting more sustainable modes of transportation, added the prime minister.

Bettel also plans to launch a Citizens' Council on Climate, to be composed of a hundred members who represent the demographic reality of Luxembourg and thus the population. With the support of experts, these 100 citizens will discuss specific climate issues, with a view to becoming an integral part of the debate in the Chamber of Deputies.

No single solution to housing problemsDuring the pandemic, housing prices rose even more sharply than in previous years, bringing the issue to crisis point. The government will focus on two elements: investment by municipalities, developers and the government to build affordable housing; and fighting speculation with undeveloped land and empty houses with a general property tax reform. This will solely target people who use housing as an object of speculation, rather than people living in their own homes.

Bettel said the Housing Pact 2.0 will be a paradigm shift in the right direction, ultimately ensuring the government will become the main player in the housing market, whose sole aim is to guarantee citizens access to affordable housing.

Elsewhere, the Prime Minister expressed confidence in the country's economy, with a labour market which stabilised itself faster than any other EU member state, and an unemployment rate of 5.5% - roughly the same as it was prior to the virus.

Bettel confirmed his government has no plans to install austerity policies, arguing the need for supporting businesses and citizens in the wake of the pandemic was too great.

Social care and well-beingFree school meals will be introduced for pupils in low-income households, in both primary and secondary education.

The government will also arrange free wraparound childcare from the next school year, as well as free homework help and music lessons to offer equal opportunities to children regardless of their background. Parent forums will be set up in all school regions to dispense information and advice to parents on the support and development of their child.

In terms of healthcare, ministers are focusing on lessons learned from the pandemic, and are currently in discussion with the OECD to commission an independent study on the management of the crisis. Other initiatives in the works include developing new training to make healthcare professions more attractive; setting up a National Health Observatory; establishing a National Agency for Medicines that will guarantee the safety of all medicines and materials used in the country;  launching a care network for long Covid patients in tandem with the Covalux project, which is a scientific analysis of the long-term consequences of the coronavirus; and introducing a national mental health plan.

Teleworking will remain a part of daily life, although Bettel acknowledged it has its limitations. He said the government were keen to decentralise jobs, to avoid the pre-pandemic commutes of hundreds of thousands of people flocking to the capital.

"There should be no place in Luxembourg where you do not feel safe" The topic of security has dominated public debate recently, said Bettel. He touched upon the topic of the capital's Gare district, and said the government will introduce a stronger police presence, as well as social measures for people in need.

By 2023, the Grand Ducal police is expected to recruit more than 600 police officers and 240 civilian staff. The government will also reform its drug policy, with both preventative and repressive measures. "There should be no place in Luxembourg where you do not feel safe", the PM underlined.

He concluded his speech by saying that he wants Luxembourg to be a place "that allows everyone to enjoy a high quality of life" and that allows "everyone to make a good living."

Covid-19 and Luxembourg's strategyA recent study concluded that thanks to the Large Scale Testing programme, Luxembourg was able to identify 99.2% of all existing infections. Four million PCR tests have been carried out in the Grand Duchy since the pandemic was declared.
Another 16 million lateral flow rapid tests have been made available for numerous sectors.

Bettel added that vaccination is a vital part of finding the way back to normality. The rate of fully vaccinated people being hospitalised is low, he says, showing that vaccination reduces the circulation and risk of transmission of the virus.

Bettel said it has been difficult to find a balance between safety and freedom over the past 18 months, however defending the government's strategy to limit freedoms in return for a safer and healthier population: "If we have taken measures that have temporarily restricted these freedoms, it is only because we firmly believed that without these measures our health care system would have collapsed."