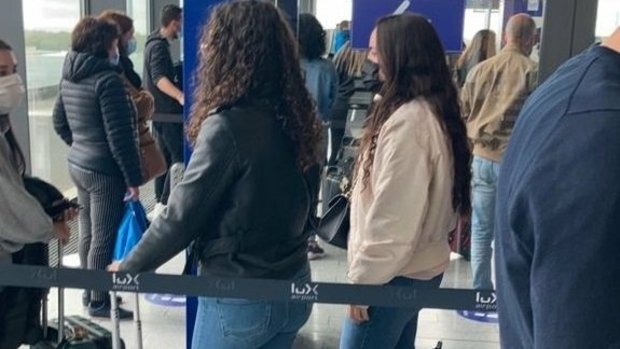 On Thursday morning, a flight to Lisbon turned into a nightmare for some 15 passengers. Substantial delays during the security check led to them not being allowed to board their plane.

One of the passengers who were supposed to board a Ryanair flight to Lisbon contacted our colleagues from RTL 5 Minutes on early Thursday afternoon, explaining that around 15 people were left on the ground.

They arrived at around 9 am to take their plane at 10.25 am but were unable to get through the boarding gates before they closed.

"There were about a hundred of us who had to go through the security check, but there was only one line open," said Katia Ferroukhi, one of the people left behind on Ryanair flight FR1792. The problem was caused by a procedural slowdown.

The minutes passed and the security agents of the G4S company, commissioned by Lux-Aiport, carried out numerous searches. Ferroukhi is used to air travel and stated that when the company made three calls for them to report for boarding, she asked that the passengers for Lisbon be given priority, seeing as the other plane was leaving later. Her request was refused, much to Ferroukhi's surprise. When they finally got through, at 9.55 am, the boarding gates were closed.

"You should have come earlier"

Since then, the young woman, her partner, and 13 other people have been seeking answers. Ryanair told them that they are not responsible and referred the passengers to Lux-Airport. They asked to speak to the management, but to no avail. Ferroukhi and her fellow passengers feel helpless, without explanations or solutions. When an employee from Lux-Airport's press service finally came to speak with the exasperated passengers, they were merely told that that they "should have come earlier".

The group decided to join forces to file complaints with Ryanair and the airport operator in order to obtain compensation. While some of the stranded passengers were struggling to find an alternative solution to get to Portugal, Ferroukhi stated that she and her partner had booked new tickets with Luxair for Friday – which cost them €361. Fortunately, they do not have to do another PCR test, she added.

The couple was forced to return to Belgium for the night and return on Friday after a day spent at a Luxembourg Airport terminal. Hopefully this time they will be able to get on a plane for their holiday, "the first since November" added Ferroukhi, who is in charge of a Red Cross home in Luxembourg.