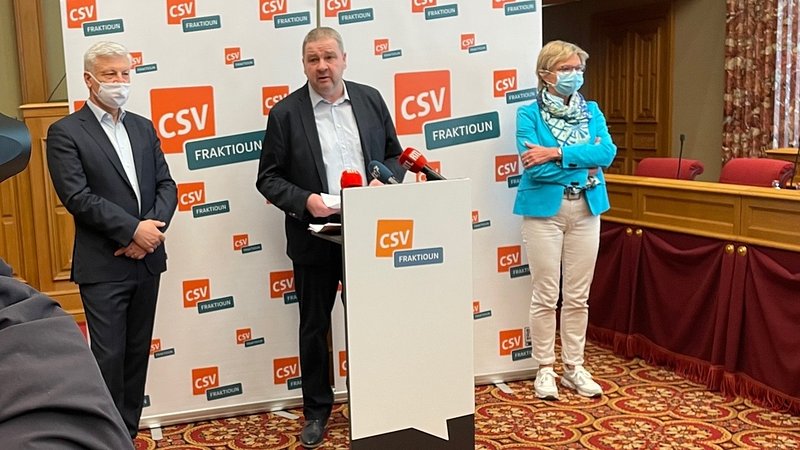 Furthermore, the conservative party wants to introduce a "green card" for nursing home employees, so as to clearly see who has been vaccinated.

During a press conference on Thursday, the Christian Social People's Party continued its attacks on Minister for Family Affairs Corinne Cahen, who they see responsible for the recent increase in deaths in Luxembourgish retirement and care homes. CSV thus accused the DP politician of having failed to live up to her responsibilities and further having tried to hide the truth and blame others for her mistakes.

MP Michel Wolter spoke at the press briefing and argued that over the coming days, members of the government should realise that a change is needed, emphasising that CSV no longer sees Cahen as a viable option for the post of Minister for Family Affairs. Wolter referred to a document, which may have been released to the Chamber unintentionally in November, and which revealed a much more detailed account of where people died of the coronavirus than was previously communicated to the public.

Wolter, who was accompanied by MP Claude Wiseler and party leader Martine Hansen, took 40 minutes to argue and develop his case. Apart from an extensive enquiry into the respective Covid clusters, CSV also demands that rapid tests be immediately provided to all employees in senior homes. Furthermore, the conservative party wants to introduce a "green card" for nursing home employees, which will show vaccinations, negative test results, and anti-bodies.

When asked whether he was presenting the situation as more dire than it really is, and whether he was painting staff members as culprits, Wolter replied that employees who work with vulnerable people should realise the amount of responsibility they carry.

Wolter was further asked whether CSV was trying to use the tragic situation to distract from party-internal troubles, to which he answered that during his 40-year-long political career, he always regarded himself as part of the solution: "Otherwise I would not be in politics!"