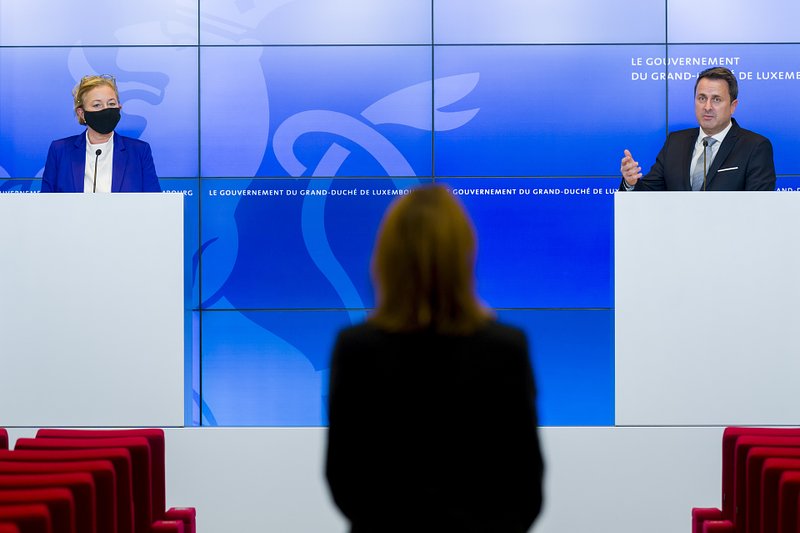 During a press briefing on Wednesday afternoon, Prime Minister Xavier Bettel confirmed that current and new restrictions will be in place until 15 January.

Both the Prime Minister and Minister of Health stressed that, while current measures have stopped an increase in the number of new cases confirmed on a daily basis, they have not yet brought about a real reduction in numbers. Minister of Health Paulette Lenert noted that the situation remains serious, and both ministers emphasised that this is not the time to lift measures.

Lenert said that we cannot ignore the fact that we have lost a lot of people to the virus, and that there is no longer a big difference between age categories in terms of new infections. As for how and where the virus spreads, Lenert said that current data continues to suggest that it moves quickest through families; if one person is infected, others in the family tend to get the virus shortly thereafter.

Given the above, we will see current measures extended until 15 January. This includes the closure of Horesca (restaurants, cafes, etc.), the household restrictions which sees a maximum of two people from one household allowed to visit a second home (including children), the limitations on sport and fitness, and the 11pm-6am curfew.

In addition, eating takeaway meals inside shopping centres will no longer be allowed. Bettel noted that going shopping shouldn't be seen as an excursion or family activity, but should be kept strictly to what is necessary. Lenert said that shopping centres have become a new 'hot spot' for infections, as people removed their masks to eat and drink, and socialise with others despite the difficulty of keeping a sufficient physical distance.

There has also been discussion about shops being open on Sunday, which Bettel said is not an issue. If shopping centres closed on Sundays, Saturday shoppers would increase. The issue is that people are treating shopping as an outing rather than an essential trip. The PM said that if shoppers arrive and see a big queue, they should ideally go home rather than adding to the problem

The limit on private gatherings - i.e. 2 people from 1 household - has received some criticism from the opposition, who have argued that the limit should be on a household basis and not numbers. That is, one household should be allowed to visit another, regardless of numbers. To this, Lenert said that she acknowledges that it is a severe limitation, but that allowing two visitors helps stave off loneliness and preserving mental health, without compromising on virus safety.

Bettel says Minister of Education Claude Meisch will introduce clarifications for activities outside of school hours. Sports and Scouts activities are subject to strict measures, but the government is aware that children still need activities and believe in their importance. Indoor activities should not take place, he said, but this is not part of the law. We thus expect more detail on this in the near future.

In answer to a question on whether it is possible that Luxembourg would introduce a stricter lockdown, following Germany's example, Bettel said that it is feasible that current measures will not be sufficient - but that the government is doing all it can to avoid a full lockdown as was the case in March.

The PM reiterated that this is not the moment to take risks, and said that he cannot predict what the situation will look like in six weeks' time. He emphasised his understanding of how difficult this situation is for Horesca, for citizens, and expressed hope that another month of restrictions will help ease the situation without resorting to a full lockdown.

When questioned on the death toll and the impact on care homes, Bettel explained he was reluctant to close down care homes again, saying they were not prisons.

Both ministers said they thought people would continue to respect the measures at Christmas. Bettel pointed out the measures were not in place for his benefit; rather, citizens should follow them in order to protect their loved ones.

One issue that many a reader has asked for clarification on was the issue with yesterday's - and today's - data. Lenert confirmed that a new system led to incorrect data, and that as previously reported this means that there will likely be no report today, and both yesterday's and today's reports will be published once the issue is resolved. The minister also confirmed that this week's weekly report will be pushed back by one day, to Friday.

For those of you worried about Christmas, or faced with spending it alone, don't forget that we'll be right here with you. We'll reveal our full programme soon, but it will include a fun and interactive ticker, a video chat with yours truly, games, quizzes, an interactive movie stream, and of course a pretty massive present giveaway (the stuff in the link isn't even all of it)! While of course it's no replacement for a proper Christmas with family and friends, we'll do our best to make the most of the situation, and we'd love to hear from you all on the day (25 December).