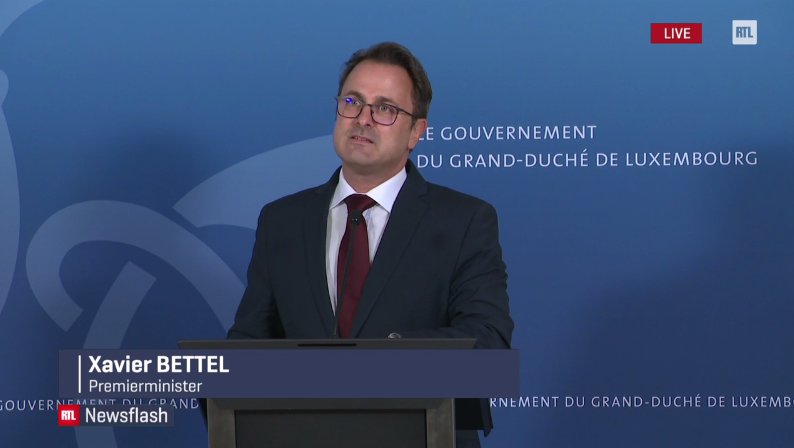 Prime Minister Xavier Bettel's press conference on Wednesday afternoon covered everything from the state of emergency going into effect, the cost of the crisis, repatriation flights, and fines for those not complying with restrictions.

Bettel started off his 45-minute conference by thanking the press for their continuous efforts in covering the crisis, proving once again the importance of a healthy media landscape in a democracy. He also showed his appreciation for medical staff, supermarket employees, and everyone else fulfilling crucial duties in these difficult times. Today Luxembourg recorded its second death, with infections jumping to 203.

He then went on to officially declare Luxembourg's state of emergency. The Prime Minister had already addressed MPs on this matter in an unusual parliamentary session on Tuesday, but now the Chamber of Deputies has 10 days to green-light the law. The emergency would last up until 30 days.

What does the state of emergency entail? During this period the government will be able to introduce new laws that come into effect immediately without requiring approval from the Chamber of Deputies. The measures taken during the state of emergency will no longer be valid once the crisis has come to an end.

Live ticker: all national and international developments in one place.

Bettel reiterated that the general rule is to stay home. Social activities should be kept to an absolute minimum. Fines of up to €10,000 are possible for those who do not comply with the government's measures. Although social gatherings are prohibited, Bettel stressed that people may go outside to catch fresh air, preferably individually or while maintaining social distance. If checked by police, the public can simply state their reason for being outside. Funerals, for example, can still continue, but families are urged to postpone these when possible.

Bettel reiterated that supermarkets will remain open - there is no need for panic buying. Customers are urged to pay with credit card rather than cash. Minister Lex Delles is in close contact with supermarkets' management boards.

Ministry of the Economy advocates for social distancing in supermarkets

Regarding the cost of the crisis, Bettel was clear: "It will cost what it has to cost." Finances will not be put above the value of human life.

Schools will definitely remain closed until after the Easter break, and maybe even longer. Bettel explained that the peak of new infections might occur in the coming days. The schools therefore remain closed until further notice. Today the European Schools announced suspension of classes until 20 April.

Later in the Q&A, one press outlet questioned the exorbitant flight prices to come back to Luxembourg. Even though repatriation is currently being organised by ministries, Bettel stressed that it is "impossible to organise private jets for each individual resident" and pick them up around the world. Ministries are in contact with other EU countries to organise repatriation as quickly as possible. Luxair is currently already bringing customers back from their holidays.

More details regarding border closures, internal security and health will be given in press conferences on Thursday.